A two-day celebration of blues music in the city of Mumbai saw performances by some of the biggest names in the industry. 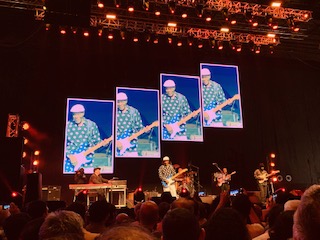 Mumbai: “The Blues are about everyday life and I sing about everything I see”, said legendary blues singer Buddy Guy at the 10th Mahindra Blues Festival in Mumbai.

At the 10th edition of the MBF, blues enthusiasts were promised a lineup of the best musicians in the business.

The event took place at the iconic Mehboob Studio in Bandra that has been rebranded into a space for the arts. The venue was split into three stages.

The first was the ‘Garden Stage,’ an open-air stage that housed merchandise stores, a bar, and a vinyl store.

The second stage, the indoors ‘Soulstrat Salon,’ was a tribute to two of India’s most well-known blues bands--Shillong-based Soulmate and Mumbai-based Blackstrat Blues.

The festival commenced with a performance by the Homegrown Blues Collective, which comprised some of the best blues musicians from across India. Soulmate, considered to be the best band Meghalaya has produced in recent years, performed a selection of their best songs. They were joined by guitarists Rohit Lalwani and Arinjoy Sarkar, along with Ehsaan Noorani on the guitar, and Loy Mendonsa on the keyboard. For some in the audience, it was refreshing to see Ehsaan and Loy playing the blues instead of their usual Bollywood compositions. 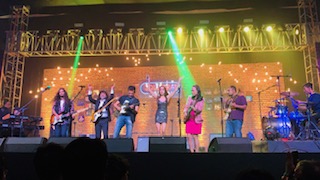 The Homegrown Blues Collective at the Soulstrat Salon

This was followed by a mellow blues-folk performance by five-time Grammy winner Kevin Moore (Keb’ Mo’), whose 2019 album Oklahoma won the Grammy for Best Americana Album, and the Kenny Wayne Shepherd Band, that specialises in rock and blues fusion.

Day two began with a performance by the Nashville-based sister duo, Larkin Poe. The recent Grammy nominees are also descendants of the 19th-century poet Edgar Allan Poe, whom the band is named after.

This was followed by a set by the winners of the Mahindra Blues Hunt, the Meghalaya-based band Quiet Storm. “Bands from Meghalaya won the MBH last year as well as this year and got a chance to play here. I feel great for the people from my region”, said Tipriti ‘TIPS’ Kharbangar, the vocalist of Soulmate.

“[The festival] is a little expensive for young college students to attend,” she said when asked about this year’s audience. “I would love to find other ways to reach out to young girls and boys who cannot afford these tickets. This music should be played for them so we can keep the blues going on, and keep it alive.”

Ten girls from a government-run school in southern Maharashtra delivered a heartwarming presentation with harmonicas, which they learnt under Mahindra volunteers as a part of the Nanhi Kali program. This program was started in 1996 to provide education and basic musical knowledge to underprivileged school girls from rural areas in India.

Headlining the festival was 83-year-old guitar virtuoso, Buddy Guy. “He has influenced some of the greatest guitarists of all time, it was a privilege to watch the maestro perform as if he was still in his twenties,” said a concert-goer.

The performance was a treat for the audience as Buddy played the guitar using a piece of cloth, a drumstick, and even his teeth. As he walked offstage and around the arena, he stitched world issues into his lyrics. “If everybody loved everybody, we wouldn’t have to worry about nuclear weapons,” he sang. He then invited all the performing artists onstage to jam with him.

At the end of the night, as Buddy was about to walk off stage, he told the audience something he has practised all his life which resonated with everyone: “when BB [King] and Muddy [Waters] left me, they said ‘Buddy, don’t let the blues die.”