Kathasangama: Mixed bag of stories and that's all

Read the review of a movie which is an amalgamation of 7 stories. Have the directors tapped out the potentials of short movies? 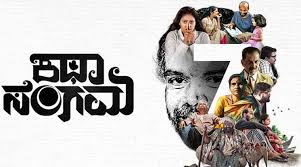 Poster of the movie Kathasangama

Bangalore: "Kathasangama", the name surely rings a bell with the Kannada audience. The movie which was originally directed by the veteran director Puttanna Kanagal had three stories that were selected from short story collections of Kannada literature. Today's Kathasangama is also a similar attempt by Rishab Shetty Productions except that none of the stories have a literary background. With seven stories, seven directors, seven musicians, and seven directors of photography, the movie seems more like a collection of short films rather than one movie.

All the seven stories have different themes: "Rainbow Land", a story portraying the father-daughter relationship; "Sathya Katha Prasanga" with a tag line "When magic gets real"; "Girgitle", where a lover re-lives the same day again and again; "Uttara", based on the present-day journalists and media industry; "Paduavaralli", set in the pre-independence era; "Sagara Sanagama", a silent film on the fears associated with the unknown; "Lacchavva", a visualisation of the plight of a village woman when she lands up in a busy city.

The movie also has a big star cast including Haripriya, Rishab Shetty, Kishore, Avinash. The audience also get an opportunity to hear various dialects of Kannada across the movie, from the northern Karnataka dialect to the coastal Kannada dialect. Only "Rainbow Land", "Uttara", and "Lacchavva", seem relatable to the present day. However, "Paduvaralli" also stands out in a thought-provoking way. It describes the confusion in the mind of a secret agent who gets an opportunity to kill a British officer during the freedom struggle. The stories, "Sathya Katha Prasanga" and "Girgitle", initially do raise a curiosity in the minds of the audience. However, the stories get too complicated down the lane and challenge the audience's intelligence rather than entertaining them. Another story, "Uttara" gets the viewers to wonder how the present-day news channels tend to sensationalise an issue and how this could affect the lives of people. All of them belong to different genres and the "reality" in the storyline and making of them are the only common factors amongst them.

"Kathasangama", no doubt, offers a variety of stories to the viewers and tries to tap into the potentials of short movies. However, none of the stories seem to have a strong narration or storyline that would hold the audience's interest.