Karnataka has retained its position as the top-ranking Major State in Niti Aayog’s India Innovation Index 2020. 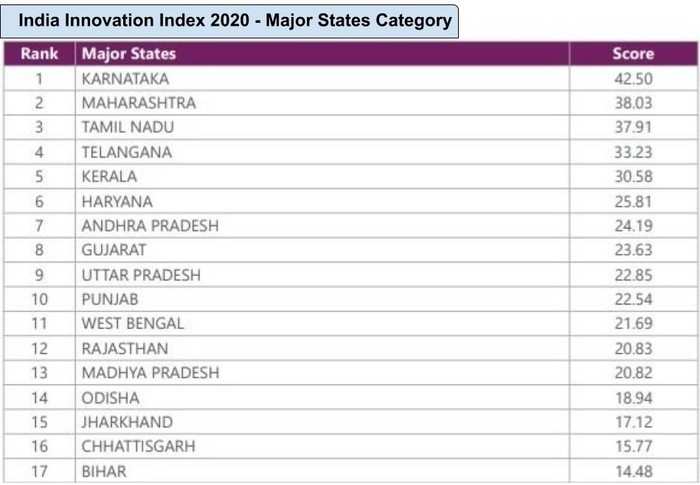 Bengaluru: According to the NITI Aayog's India Innovation Index Report 2020, Karnataka has been ranked the most innovative state for the second year in a row among major states with a score of 42.5. The rankings were released by NITI Aayog Vice-Chairman Rajiv Kumar on January 20.

The framework of the index includes globally considered parameters for measuring innovation, such as the percentage of GDP (Gross Domestic Product) spent on Research and Development (R & D) while keeping them specific to the Indian economy.

A few other indicators that were considered for the survey included the level and quality of education in research, number of PhD students enrolled in engineering and technology, number of highly-skilled professionals, investment in R&D, FDI inflows, internet subscribers, knowledge-intensive employment, number of patents and trademark applications filed, business environment, and safety and legal environment.

“We aim to sync Indian Innovation Index with the Global Innovation Index which has 80 parameters compared to 36 in India,” Mr Kumar said. He asserted that there were several areas in which India needed to improve to meet global competitiveness in innovation, including increased expenditure in R&D by the private sector. “The Union Government is a major spender in research, but the investment of the private sector is very low. Compare this to Israel, where private companies account for 70 per cent of investment in R&D,’’ he added.

The India Innovation Index is divided into three categories: the Major States, the Union Territories, and the Hilly States. The southern states including Karnataka, Tamil Nadu, Telangana, and Kerala have been ranked under the ‘Major States’ category in innovation this year. Delhi has scored the highest on the index among the Union Territories with a score of 46.6, and Himachal Pradesh has scored the highest score of 25 under the Hilly States category.

“As the world has been grappling with COVID-19 for more than a year, innovation should be given the topmost priority this year. It will not only contribute to higher productivity but also help in bolstering a post-crisis economy. The Centre’s interest in promoting a culture of innovation through initiatives such as the Atal Innovation Mission and Startup India is appreciable. I hope that the India Innovation Index 2020 helps the country in recognizing the key areas of developmental intervention, with innovation as the central driver for growth,” Mr Kumar has said.

The Innovation Report 2020 has also pointed out that the best practices observed within the States should be documented to encourage peer-to-peer learning. Also, to ensure that the index’s framework is more robust to capture the best picture for the Indian innovative ecosystem, NITI Aayog is planning to introduce a micro-analysis of the State-level policies in the next year’s report.