A walk through the oldest folk festival of Bangalore, the "Kadlekai Parshe" 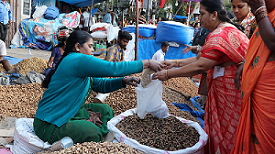 People flocked to the fair to buy groundnut

Bangalore: The buzz of "kadalekai kadalekai" filled the air at the Bangalore's oldest folk festival, "Kadalekai Parishe" (groundnut fair). The streets of "Basavanagudi" were decked up with stalls selling varieties of groundnuts, including "Kadiri","Chitra","Kaushal","Amber". There were other stalls too which sold pineapple, chaats; home-decor items such as lamps, lanterns; festive essentials; and toys.

Every year, vendors from across the State set up their stalls at the fair, for the annual sale. "I have been coming here for the past 20 years. I finish the sales and go back to my place. This year the sales are a little down" said Ramesh, who runs a local business at Hogenakal. There were other local vendors as well who came over from other areas of the city such as K.R.Market, Kalasipalya. There were also vendors from Tamil Nadu and Shirdi. As an impact of all the awareness programmes, this year the vendors used brown bags and paper covers instead of plastic bags.

It is said that the "kadlekai parishe" started long ago when there were farms around Basavanagudi. According to a legend, a bull troubled the farmers and destroyed their crops. That was when the farmers prayed to "Nandi" and once they were freed from trouble, they offered the groundnuts they had grown to the bull. Every year during the fair, groundnuts are poured as offerings over the Nandi in the bull temple at Basavangudi. The fair kicks off on the last Monday of "Kaarthika maasa"(eighth month of the lunar calendar) and a number of people come here to worship Nandi and Ganapathi on that day.

"I came to Bangalore 40 years ago and have been here at the fair almost every year. It has become a practice and a tradition for me and my family," said Ms.Nagamani, a housewife. Over the years, the fair has also evolved and what once was just limited to groundnuts, now includes other stalls and also a play area for kids. "I love bringing my children to this fair as this gives us an opportunity to show them how our childhood was," said Lakshmi, mother of two young boys. There were first-time visitors as well. "I was expecting a crowd, but this crowd is way beyond my expectation and so are the stalls," said a first-time visitor, Nandini.

This year's fair was held from November 25 to 28. Lakhs of people poured in to experience the charm of old Bangalore. If you missed it, make sure to add it to your calendar next year.