Justice Delayed Is Power Gained: The Criminalization of Politics

National School of Journalism and Public Discourse (NSoJ) and DAKSH Society take a close look at the pendency and disposal of criminal proceedings as it pertains to MLAs currently serving in Bihar. 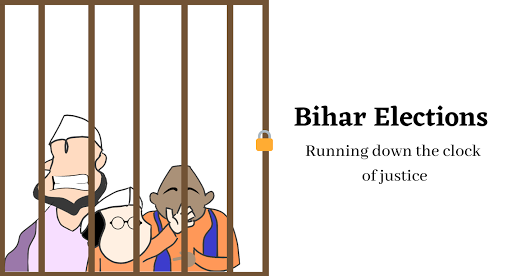 The presumption of innocence is fundamental to ensuring that defendants in criminal proceedings have a fair trial. Unfortunately, this has worked to the advantage of politicians who continue in positions of power while criminal cases remain pending for years on end before being convicted.

Delays and pendency in the Indian legal system have enabled several politicians in India to contest and win elections for decades before being convicted of criminal wrongdoing. Perhaps the most glaring example of this is that of Ms J. Jayalalithaa. The disproportionate assets case against her was pending for 21 years in various courts before she was convicted posthumously in 2017. In the intervening period, she served as Chief Minister of Tamil Nadu for five terms and was buried with full state honours as an incumbent chief minister.

Political parties continue to hand tickets to tainted candidates or their relatives. Bihar, the Indian state that will go to the polls tomorrow, is a poster child for the criminalisation of politics. In the 2015 Bihar Legislative Assembly elections, out of the 243 Members of the Legislative Assembly (MLAs), 141 (approximately 58 per cent of them) had declared criminal cases pending against them as per information collected by the Association for Democratic Reforms. We have analysed 178 cases that we could identify in relation to these 141 MLAs. Of the 178 criminal cases filed against sitting MLAs that were pending at the time they filed their affidavits in 2015, 98 remain pending five years later. 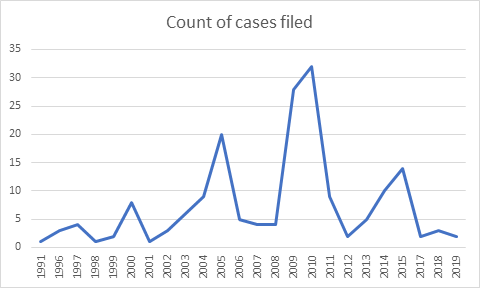 Our analysis shows that there are significant spikes in cases filed against candidates during every state election year, indicating that many of these cases may be politically motivated.

If we look only at the 98 cases that remained pending for the entire duration of the assembly term, we find that the average time for which these cases have been pending in court is 4,048 days, i.e. 11.2 years. Such delays work to the advantage of the candidate since politicians convicted of crimes and sentenced to prison terms of two or more years cannot contest elections for six years after they leave prison. The cases against Mr Anant Singh, who has been an MLA of Mokama constituency since 2005, have an average pendency time of 3,861 days, i.e. 10.57 years. One such case against him has been pending since 1979 i.e. for 41 years on charges of “murder with common intention”. Mr. Singh’s affidavit for the 2020 election shows that he currently has 38 pending cases, the highest among all sitting MLAs in the current legislative assembly. His pending cases include charges of murder, kidnapping and attempt to murder.

It is relevant to mention here that the Supreme Court passed orders on February 13, 2020, making it mandatory for all political parties to provide justification for giving tickets to candidates who have pending criminal cases against them. The justification should pertain to their qualifications and merits and beyond “mere winnability at the polls”.

However, the justification of Mr. Anant Singh’s candidature given by his political party for the upcoming elections in 2020 states: “He is more popular than any other candidate of the area. … He is always ready to help the poor person of the area that’s why many criminal cases were lodged against him.”

While many political parties have openly fielded candidates with pending criminal cases against them, some of them have instead fielded spouses or relatives of tainted candidates.

For instance, the Atri ticket in Gaya has been given to Ms. Manorma Devi. She is the wife of Mr. Bindi Yadav, a strongman in Gaya, who along with his son – Mr. Rocky Yadav, is serving a sentence in jail for a road rage case. Ms. Manorma Devi herself has been charged with possessing and carrying firearms and is accused of charges including theft, cheating and forgery. Ms. Devi’s candidature has been justified by the assertion that party workers of Atri “have demanded that she be fielded as the party candidate” for her popularity in the region due to her “extensive work” in the programs concerning women. The political party to which she belongs further explains her selection by stating the “concern for fielding as many women candidates as possible”.

Similarly, Ms. Aruna Devi, wife of gangster Akhilesh Singh, is seeking re-election as an MLA from the Warsaliganj constituency.

Of the 178 cases we analysed, 67 criminal cases against lawmakers in Bihar have been disposed of since 2015, taking an average time of 3,768 days i.e. 10.3 years. When viewed in the context of legislative terms in India being five years ordinarily, the pendency of criminal proceedings for more than a decade adversely impacts reasonable public expectation of not being governed by possible criminals for extended periods of time.

With the number of pending cases increasing from election to election and no speedy disposal of cases in the sight, suspected lawbreakers are being fielded as candidates, winning at the polls and are eventually going on to become our lawmakers. There is an urgent need for a speedy disposal of cases against politicians to avoid the accumulation of pending cases which allows possibly tainted politicians to continue holding positions of power for long periods of time.

The role of the Supreme Court in requiring public disclosure of justifications for fielding candidates with pending criminal cases as well as mandating the expeditious trial of pending cases against lawmakers is a step in the right direction. Perhaps arming this requirement with an adequate enforcement mechanism can be a good next step. But lasting change can be achieved only when the voting public chooses to vote out tainted candidates. The media’s role in enlightening the public and raising the level of public discourse is therefore equally important to strengthen democracy.