Dr Anya Schiffrin spoke about the vital role journalists play. Her talk was followed by a panel discussion on the role of independent media 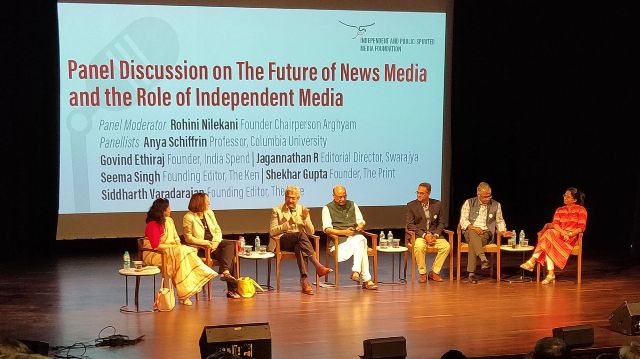 Journalism has a vital role to play in holding power to account, said Dr Anya Schiffrin at a panel discussion on ‘The Future of News Media and The Role of Independent Media’, recently, at the Bangalore International Centre here.

Dr Schiffrin is the Director of Technology, Media and Communication specialisation at Columbia University’s School of International and Public Affairs. She was in Bangalore to deliver a guest lecture organised by the Independent and Public-Spirited Media Foundation (IPSMF). Given the business crisis affecting much of journalism, there is a dire need for government and philanthropic support, she said. It is about time to discuss the role of misinformation and how government can regulate large companies circulating hate speech and false advertising, she added.

“We need to think big to save Journalism”, she told the ocean of journalists and aspiring journalists present. Dr Schiffrin, who has over ten years experience as a journalist, also teaches courses on media, human rights, social change and development.She also studies struggling business models adopted by media houses.

According to Dr Schiffrin, the business models designed by media houses are failing as there is migration of advertising online. Moreover, it is a quest for increasing the number of likes, thereby compromising quality over quantity. She said award-winning reporting does not equal financial security for a journalist. The media can have a profound effect by raising general awareness and bolstering the legitimacy of government agencies fighting corruption.

Over the years, investigative reporting has grown, she said, thanks to philanthropic funding and the continuous quest for data with the help of multimedia. This development is also documented in her recent book ‘Global Muckraking: 100 Years of Investigative Journalism from Around The World', which provides a deep insight into how journalists exposed corruption, human rights and labour abuses that span the entire 20th century.

The panellists stressed the importance of neutrality in journalism. Eliminating bias and analysing both sides of a story results in closer approximation to truth, they pointed out.

According to Mr Vardarajan, in the world of Indian politics, media has lost the art of civilised conversation. "Television news has damaged journalism", he said. “It has coloured people’s minds to perceive it as a means to create fake scandals.” The panelists highlighted the significance of public funding and how it can enable independent news houses to be powerful and viable enough to compete with mainstream media.

Ms Singh from The Ken urged independent media outlets to understand their audience. Her business model strives on subscription, she said. “This enables us to focus on quality and provides independence to do what they want to,” she added.

Mr Ethiraj believed that readers would pay for content if independent media outlets are successful in building trust. “There is now a lack of accuracy in these days of hate speech and misinformation,” he said.

However,aspects such as the left-leaning nature of ‘independent’ news houses and the thin line between philanthropy and advertisement, remained unanswered during the discussion.

IPSMF is a public charitable trust that funds small and independent media outlets that aim to raise public awareness and improve the public understanding of issues. It promotes excellence in independent, public-spirited and socially impactful journalism.