Students of a Bangalore girls’ college and BJP party workers got into a argument about the controversial Citizenship (Amendment) Act. 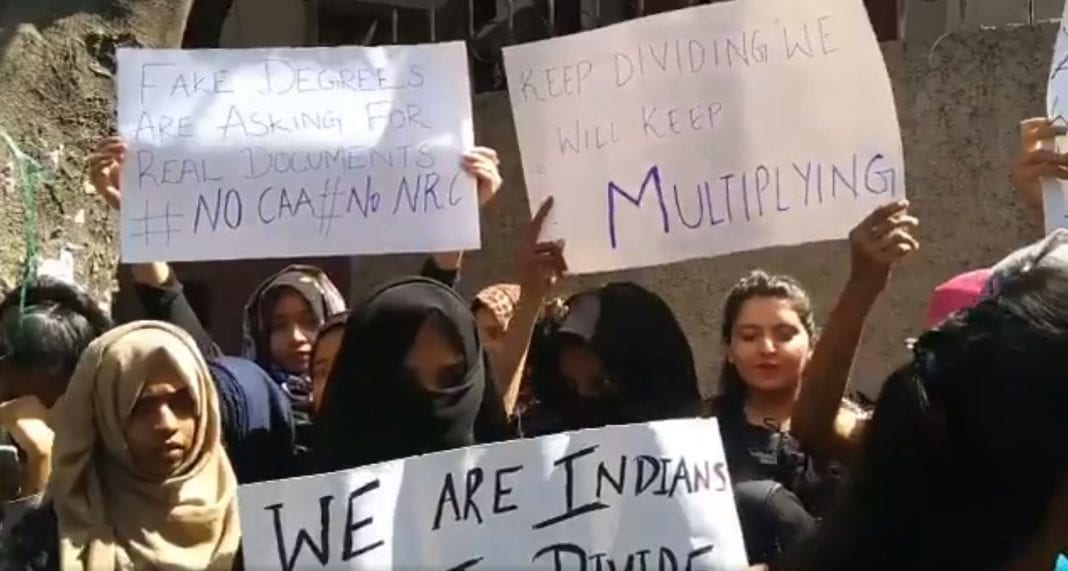 Students hold placards in protest outside the JNC campus on Thursday. Credits: thefederal.com

The students of Jyoti Nivas College, Koramangala, held a silent protest on Thursday evening, to voice their displeasure against an incident that took place right outside the college campus.

On the evening of January 8, a group of BJP party workers hung a banner , that read ‘India Supports CAA,’ on the boundary wall of the college, allegedly forcing passers-by to sign on it. According to videos circulating online, an argument broke out between the workers and some students, when a few of them refused to do so.

“You are not concerned about citizenship, but only about yourself,” a party worker was seen yelling at students who objected to the banner being hung on the college property. According to posts on social media, the men were also shouting slogans such as, “Go back to Pakistan!”

“They threatened the students and staff saying if we don’t sign the banner, they will slaughter us like they did at JNU and Jamia [Millia Islamia University],” another post on social media alleged. The disagreement lasted for 30 minutes, said street vendors in the area, who noted that the crowd dispersed once the police arrived at the scene.

Keeping in mind the tensions flaring across the country, additional police forces were deputed around the college on Thursday. “We deployed members from our force, along with Hoysalas to patrol the area. The safety of the women there is our utmost priority and we will ensure that we will protect them from any untoward incidents,” DCP (south- east) Isha Pant told Bangalore Times.

“Yesterday, there was a small dispute between two groups, which dispersed once we arrived. Today, there has been no protest or disturbance as such,” an inspector stationed near the college told NSoJ reporters. However, media outlets report a different story.

According to news reports, students held a silent protest outside the college, before being herded into the campus. This protest is said to have continued within the premises.

When NSoJ attempted to clarify the confusion surrounding the events of the two days, students from the college refused to comment. They also said that the college management had instructed them to keep mum, until an official statement was released.

Update: Jyoti Nivas College announced that the college would not be working on January 10 and 11, keeping in mind the tensions from earlier in the week.