It's A Park, Can't Be A Parking Lot

Read about how a crucial lung space and a haven for walking and jogging, is now besieged from all sides. 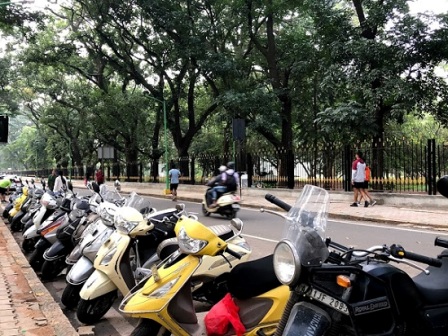 Parking of vehicles inside the park has ruined its beauty

By Roshini Muthukumar and Sneha Ramesh

Bangalore: How many times have you struggled to find parking space near Mahatma Gandhi Road or Vidhana Soudha? At such times, has someone suggested that you find parking inside Cubbon Park? Located in the heart of the city, this landmark lung-space of Bangalore is spread across 300 acres. It is used as a paid-parking space and is also a regular route used by motorists. However, there has been a long-standing request from environmentalists, walkers, and some government officials, to completely ban the movement of vehicles inside the park.

A haven for walkers and pets, Cubbon Park (named after Sir Mark Cubbon, a British administrator during the colonial rule) turns 150 in 2020. It is open for vehicular movement every day from 8 am to 8 pm. Recently, the Horticulture Department proposed a tender to manage the parking area inside the park. According to the reports, the department expects to earn Rs 60 lakh from five designated spaces.

Ravi, a security guard at one of the entrances in Cubbon Park, said: " People from offices outside, visitors to Chinnaswamy Cricket Stadium, and mall-goers tend to park their vehicles inside as there is no other suitable place around. During the IPL matches, the vehicles are parked everywhere in the park." Being in close vicinity to Chinnaswamy Stadium and UB City mall, it serves as an advantage to non-park visitors also.

Those who regularly walk inside the park claim that paid parking along with vehicle movement will increase pollution levels inside the park and that this will go against their plan of making Cubbon Park vehicle-free like Lalbagh.

Manjunath, a dentist who has been visiting Cubbon Park every morning since his childhood, said: " For the human body to grow, the body-parts and other systems should function properly. Similarly, for the growth of the city, conservation and development should go hand-in-hand. But the government is destroying the lung spaces of the city."

That’s not all. Cubbon Park has been in the news recently for a proposal by the High Court to build for itself a new building inside the park. This has caused a stir among the Cubbon Park Walkers Association, environmentalists, and other nature enthusiasts.

According to a news report in the Bangalore Mirror, P Umesh Kumar, president of the Cubbon Park Walkers’ Association, has filed a Public Interest Litigation (PIL) against the state government, for the proposed seven-storeyed building.

"HeritageBeku", an NGO working in the same sector, has conducted awareness programmes and protests against the construction of a new building inside the park. Following the public outrage, the government is now reconsidering its decision.

For years, Cubbon Park has served as the space for walking, jogging, and parking of vehicles, and also a shortcut for motorists. Hence, a complete ban on vehicles is not practical or possible, say the traffic police. "If vehicular movement is completely banned, traffic problems in the areas surrounding the park will increase significantly. It will be a tough task to manage traffic. Considering the requests of environmentalists and park visitors, the government has curbed vehicle movement on second Saturdays and for national holidays," said Murali, a police officer stationed at the park.

A regular visitor to the park angrily said, " I have been visiting the park for 25 years, and I still don't like the idea of parking of vehicles inside the park, leave alone vehicles moving through here."

However, the proposed projects (the tender and the proposed court building) are nothing new. Throughout its existence, Cubbon Park has had threats to its pristine surroundings. And such encroachment often takes the form of "de-notification" on the part of the government machinery.

In 2001, the High Court insisted a ban on all construction activity inside the park, but there have been instances of illegal construction on account of de-notification. One such instance was when the state government de-notified various parts of Cubbon Park on grounds of road-widening.

Bangalore, earlier known as the "Garden City", is now called the garbage city, traffic city, and worse. With the city's lung spaces already disappearing, will the government wake up and save this last remaining heritage green space, or allow it to be swallowed by the city’s already rampant toxic growth?