It is a unique and indispensable partnership

In the latest edition of Talks @ NSoJ, India’s Ex-Ambassador to Kazakhstan, Latvia and Sweden, His Excellency Ashok Sajjanhar addressed the students and faculty of National School of Journalism and Public Discourse on “India’s Foreign Policy 2021”. 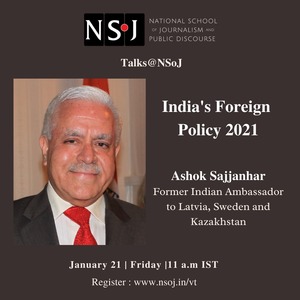 His Excellency Ashok Sajjanhar served the Indian Foreign Service for over three decades, holding key diplomatic positions in Washington DC, Brussels, Moscow, Geneva, Tehran, Dhaka, and Bangkok. He also represented India at the Uruguay Round of Multilateral Trade Negotiations, for India-EU, India-ASEAN, and the India-Thailand Free Trade Agreement. H.E Sajjanhar, in his address, discussed India's bilateral relations with the US, the Russian Federation and erstwhile USSR and India’s stance on government change in Afghanistan. The speaker was introduced by Prof Vinusha Kannan.

“An indispensable partnership”
Talking about the Indo-US diplomatic relationship, he highlighted how the diplomatic ties with the US have improved since the late 1990s. “When we were having the 1971 war with Pakistan, the war for Liberation of Bangladesh, the USS Enterprise along with the 7th Fleet, had entered the Bay of Bengal. The attempt was to threaten and intimidate India so that East Pakistan is not separated from Pakistan…” He also went on to say perhaps that was the lowest point of the diplomatic relationship between the US and India.

Another low point in the diplomatic relations with the US was after the 1997 Pokhran nuclear test, after which the US imposed sanctions on India. However, things began to improve when president Bill Clinton visited India in March 2000. Then India’s Prime Minister Atal Bihari Vajpayee’s visit to the US also improved the bilateral relationship, when he called India and the US “natural allies' '. This further improved when Barack Obama said that “this [Indo-US Diplomatic Relationship] could be a defining partnership of the 21st century”. Relations with the US to this day are improving. “When Trump came to power, it was thought that the Indo-US relations would suffer, but that did not happen. There was a bonhomie that existed between Prime Minister Modi and President Trump… And soon after Trump left the White House, observers thought that now that Biden is in power, the relationship between the two is not going to be as friendly as before. But in fact, relations between India and the US are on an upward trajectory” H.E. Sajjanhar said. He also went on to add that around the early 2000s, the ‘de-hyphenation’ of India-US relations began to happen.

"A time tested partner"
Speaking about Russia and the erstwhile USSR (Soviet Union), Ambassador Sajjanhar said that "...both during the Cold War (1947-1991), the erstwhile Soviet Union helped India in every sense: our economic growth, supplying defense equipment to us or even diplomatically using their veto powers at the Security Council. The Soviet Union was always a strong partner, and I would say that the pinnacle of our relationship with the USSR was reached in 1971 with the signing of the Indo-Soviet Treaty of Peace, Friendship, and Cooperation". He also went on to add that the Soviet Union helped India in the war by preventing the US 7th Fleet from entering the Bay of Bengal by dispatching nuclear submarines.

The relationship between India and the Russian Federation was slightly stressed post the balkanization of the USSR in 1991. Things began to improve when Vladimir Putin became the president of the Russian Federation in May 2000. Due to the pandemic, the annual 2+2 ministerial meeting between India and Russia didn't take place, even virtually! But experts say that as "the nature, the scope, the depth, the texture of the Indo-Russian relationship is such that it does not lend itself to having a substantive discussion as far as a virtual summit is concerned" Ambassador Sajjanhar also went on to say that the Indo-Russian relationship is so strong that on December 6th, 2021, President Vladimir Putin made a 5-hour visit to India for a 2+2 format diplomatic meeting. "The flying time from Delhi to Moscow is about 8 hours. That means the president of significant global power is losing 16 hours to travel to and fro to be in India for just about 5 hours. I think this is a testament to the importance that Russia, and especially President Putin, attach to this relationship", he added.

The Question and Answer session was moderated by Anuj Rayate from BA '22.


Q: "Has Russia become irrelevant in global defense-strategic affairs that it is trying to make itself look relevant by involving itself in its neighbour's internal affairs? Also, what does the future hold for Russia as a nation in the international military and diplomatic community? "
Ans: No, Russia hasn't become irrelevant in the global scenario. The reason why Russia is involving itself in the matters of its immediate neighbors is because, even though the USSR collapsed in 1991, a majority of the satellite states hold cultural affinity to the Russian Federation. Russia, also under the CSTO (Collective Security Treaty Organisation) is entitled to help maintain stability in the Central Asian region and Eastern European regions. As far as Russia getting into a war with the West over Ukraine is concerned, it is highly unlikely as America in particular is more focused on the Indo-Pacific region.


Q: "Governments from across the globe have to contend with 17 different goals and 169 targets under the 2030 agenda for sustainable development. We know that the union is at the cutting edge in executing the undertakings but how can civil society contribute to ecological balance and in fulfilling these 17 goals which several countries have jointly agreed upon?"
Ans: India has managed to keep up with its commitments to the Paris Accords very diligently, through schemes such as Niti Aayog and Beti Bachao, Beti Padhao Abhiyan. Perhaps this has slowed down due to the pandemic, but to a large extent, we have managed to cover our commitments to the international community on sustainable development quite diligently. Scandinavian countries find it easier to keep themselves on top of the sustainable development charts because they have very high standards of living and all they have to do is take smaller steps towards sustainable development.


Q: "With context to the military expansion of China into disputed territories along the border, has India's emphasis on "soft power" diplomacy led to the weakening of India's true diplomatic potential?"
Ans: India's diplomatic and military stance against China has improved over the past 2 years at least, especially after the Galwan Valley incident. We have shown the Chinese that we could keep up with their military deployments along with Ladakh and Arunachal Pradesh and are capable of "mirroring" their actions. This was possible because of the vast infrastructural development on our side since the past 7-8 years, that we have been able to mobilize quickly. Infrastructure development along the Indian side of the border also ensures that the local civilians feel more affinity towards the Indian government.