Is a short disruption once in five years too big a price to pay?

“Since the turn of the century, there has been significant improvements in logistics and yet the durations of elections are getting longer. Why? Ask the EC”. 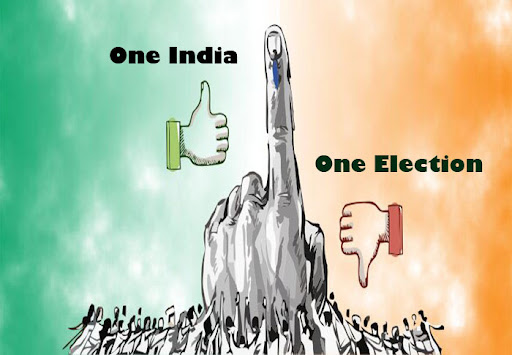 Idea of simultaneous elections has commentators in splits Credits: ThePolicyTimes

“In a parliamentary democracy, parliament is not supreme. It is the people who are supreme. And at any particular given time, the government or the legislature must have our confidence to govern us” said psephologist Mr Dorab Sopariwala during a talk organised by LSE Alumni Association of Mumbai and Western India and National School of Journalism.

Over the years, the idea of simultaneous elections throughout the nation has found greater resonance among leaders and commentators.

The idea is said to have been first proposed by senior BJP leader LK Advani in 1995. Subsequently in the year 2019, Prime Minister Mr Modi, a staunch supporter of ‘one nation, one election', convened an all-party meeting to discuss and seek opinions on the issue.

Backed by the current Chief Election Commissioner Sushil Chandra as well as a few of his immediate predecessors, the recommendation generally comprises two components: a) fixed-term Lok Sabha elections, and b) simultaneous Lok Sabha and assembly elections.

The supporters of simultaneous polls have expressed concern over ‘frequent’ elections and the model code disrupting and hampering a government’s functioning and that election expenditures were skyrocketing every passing year.

However, Sopariwala in his lecture dismissed the idea as well as offered a fact check to such popular narratives built around the pros and cons of multiple elections.

Fixed-term system in the West?

Countering Advani’s argument that many western nations like the United Kingdom (UK) have moved to a ‘fixed-term’ system, Sopariwala pointed out the exceptional clauses in the 2011 Fixed Term Parliament Act and how they have played out in recent years.

“Earlier the British PM could call elections whenever he wanted, but now the rule is that he can call it only once after five years, except if two-thirds of the members of the House of Commons (HoC), the lower house, agree for an early election. It's a ‘sort of’ fixed-term. And see how it has worked. Since the act was passed, both the elections ( in 2017 and 2019) have been irregular”, explained Mr Sopariwala. 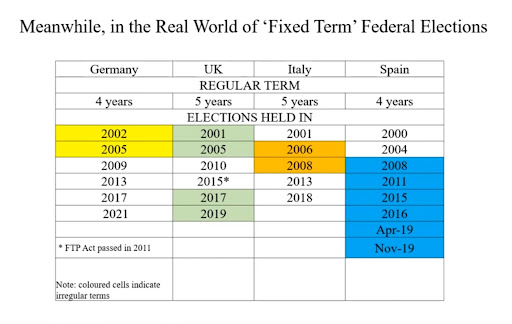 Talking of a column that seemed to suggest concurrent central and provincial elections in Germany, the largest European democracy, Sopariwala wondered “how could this be when the term of the Bundestag (the federal parliament) is four years while that of the lower houses of the two largest German states is five years?”

He also brought forward the complete truth behind article 67 of the German constitution which says that the Bundestag cannot be dissolved mid-way and that a Chancellor could be replaced only by a ‘constructive vote of no confidence’. This essentially implied that a Chancellor couldn’t be dismissed in isolation. They must be immediately replaced by another.

“True. But what about article 68? If a Chancellor himself calls for a vote of confidence and fails, a new election can be called. And Chancellors have been found to use the excuse to seek fresh elections in the past. Even the court didn’t interfere, calling it ‘valid’ as per the constitution”, reasoned Dorab.

Armed with data, Mr Sopariwala who is also the NDTV editorial adviser, showcased that apart from Delhi, Bihar and Karnataka, all the other states, since the year 2000, have had elections only after five years. Thus, the concern of ‘too many elections’ doesn’t hold ground.

Mr Dorab went on to ask- “Did the elections in UP, Punjab, etc. in any way affect the state of Gujarat or Tamil Nadu?”- to emphasise that India is not in election mode all the time.

“Is a short disruption once in five years too big a price to pay?”, quizzed Sopariwala, also the co-author of ‘The Verdict’.

For EC to answer

Disruptions are unavoidable. But is the disruption short or long?

The second largest state of Maharashtra, in 2019, took 24 days from the date of election notification to the final date of polling. But for Bihar, it took 39 days in 2020. The same Bihar state election was done within 36 days in 2002.

“Since the turn of the century, there has been significant improvements in logistics and security strength, and yet the time period for conducting elections in many cases is growing. How?” Mr Sopariwala posed the question to the Election Commission (EC).

But how much do elections cost? And can simultaneous elections bring down the cost significantly enough to trigger the change sought? 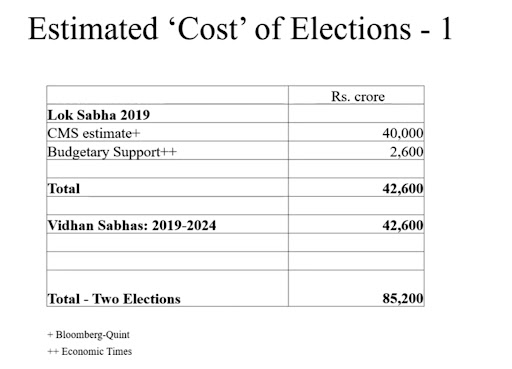 Adjusting the share of black money in election expenditures, Mr Dorab generously added around Rs 65,000 crores. This brings the estimated expenditure for all the elections from 2019 to 2024 to 1,75,200 crore.

Sopariwala, based on his understanding, expects the incurred cost to go down by two-thirds if elections were held simultaneously. In such a scenario, the likely total savings for the public exchequer would be 30,000 crore rupees i.e, 6,000 crores per year only. ‘Not enough to break the bank’- quipped Mr Sopariwala.

Further, going by the track record of EC, Dorab appeared convinced that concurrent voting is definitely not going to reduce the ‘disruption’ time, in fact, may inflate it by weeks.

“4-6 weeks’ disruption in those 27 states where voting is not at the same time as the Lok Sabha. But, with the EC around, the duration of the combined exercise may go up by a couple of weeks from the current (2019) 62 days”.

Governors are not the answers

At any particular time in any state, the government or the legislature must have the confidence of the people. Governors are not the answers. For Dorab, rule by the Governor is no democracy at all. He cited the names of several Governors like BS Koshiyari whose actions have even invited stern reactions even from the esteemed court. “Are non-elected Governors going to decide on the budget and public expenditure?”

Sopariwala was surprised that it occurred to nobody. What if the central government fell before the stipulated term? There is no provision for President’s rule at the centre.

“Remember Charan Singh in 1979, VP Singh in 1990, Chandrasekhar in 1991! Had the simultaneous election system been in place, what would have happened?”, he wondered. 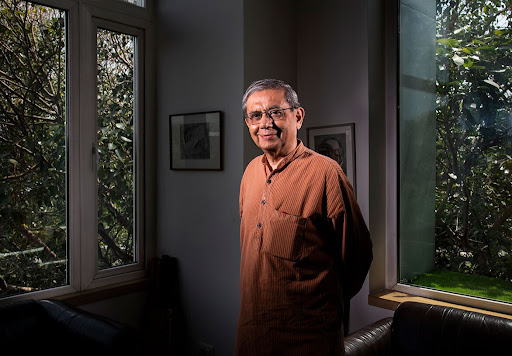 Dorab Sopariwala is a distinguished alumnus of the London School of Economics and Political Science. Credits: Reader’s Digest

The talk was moderated by Sonya Misquitta, Communications Coordinator of the LSE Alumni Mumbai chapter and saw active participation by the NSoJ community.