Indian? Are you sure? 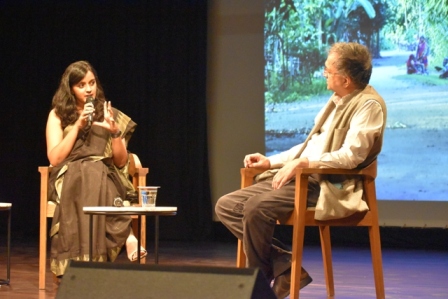 By Nishi Trivedi and Subham Das

Bangalore: If someone asks you about the legal identity of your grandfather to prove that he was really an Indian, you will find it shocking and perhaps, insulting. The current scenario in various districts of Assam appears to be just that: almost everyone is suspected to be non-Indian, which means a foreigner in your own country.

“Prove your grandfather is Indian,” was the title of a talk held recently in Bangalore where Journalist and author Rohini Mohan shared her experience and data which she had collected while reporting on the National Citizens Registry across the state of Assam.

Illegal entry of Bangladeshi citizens into the country has been an issue for a long time. To tackle this, the Union government decided to have a system called the NRC that would determine who was an Indian and who was not. But it is not a simple process as it sounds, is what Ms. Mohan told her audience. National Registry of Citizens is a list of names of people who are considered Indian based on the set of documents submitted by them. “Over 19 lakh people were not included in the latest list,” Ms. Mohan said. Explaining why the names of these people were not included in the registry, she said there were two sets of documents that were to be submitted by the people. First, they had to submit a document which proves that their ancestors lived in Assam before 1971, and second, a document proving their relationship with the ancestors. Land papers and birth certificates of grandparents are the key to get an entry into the NRC list. Further, women who were married before the age of 18 had documents with their husband’s name in them and as per the NRC regulation, they had to produce the proof of their ancestors. “More than half of these women did not make it to the list,” she added.

Not only the vulnerable part of society was affected but even the other sections faced the challenge of proving their identity. From Army officials to journalists to even an entire village were not added in the list. “I met 15 people who were in the armed forces who did not make it to the list,” she recalled. The terrifying process does not end here. The people who were not in the list had to go to the Foreigners Tribunal where they got another chance to explain themselves. There are around 1100 tribunals set up across the state where the hearing of these cases are taking place. These tribunals are headed by members who are either lawyers with five years of experience or bureaucrats with three to five years of experience without any background of Jurisdiction, not like the courts in the country. Worse, in these tribunal people are assumed guilty. “you don’t know the allegations against you but you have to prove them wrong,” Ms. Mohan added.

The working of the NRC and these tribunals has confused not just the people of Assam but even the rest of the country. Those who do not make it through both these processes are sent to detention camps. Families have left their houses, children do not go to schools and some have even committed suicide as they could not prove they were truly Indian. The application of those who are facing trials in any other system are not even processed. Many are left unheard and are labeled as either “foreigner or doubtful citizens.”

The big questions are: Where is the end to this? And What is in store for these genuine Indians whose misfortune it is that they have no legal documents to prove their nationality?