Crematoriums across the country have been operating round the clock to cremate those who have died of COVID-19. The following report depicts the state of a crematorium in Kolhapur, Maharashtra. 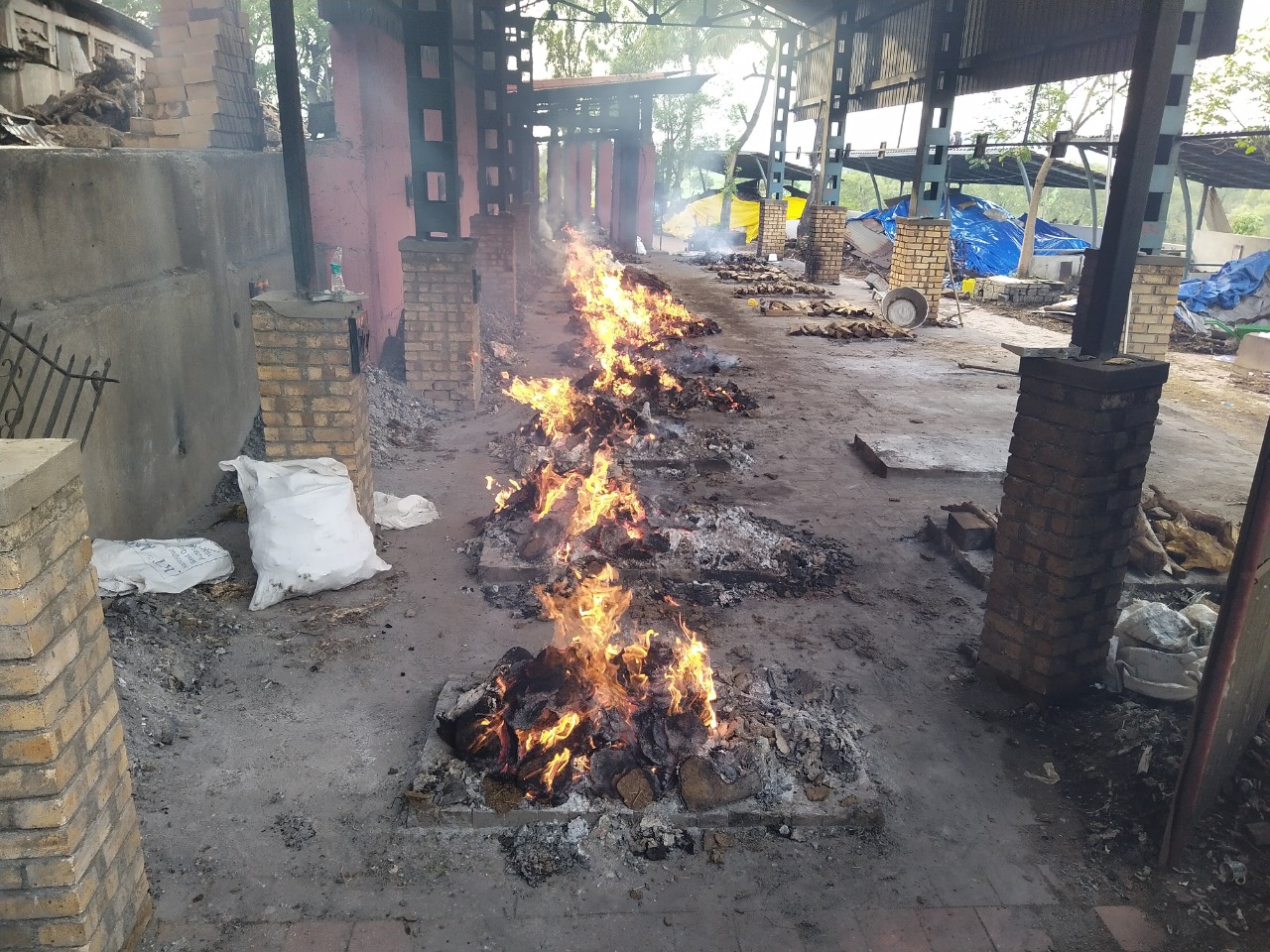 Kolhapur: It was a gloomy afternoon. A few people were standing outside the crematorium in Kolhapur, Maharashtra, watching their loved ones being cremated. Some were crying for the loss of their dear ones while others were consoling them. However, no one was allowed to enter inside the crematorium compound even though the gate was wide open.

A worker wearing a Personal Protective Equipment (PPE) kit and a mask was standing near the burning bodies waiting to add wooden logs in the pyre if required. Adjacent to the funeral pyres was a small room with a diesel-run cremation furnace, where a couple of bodies were burning in the dark.

The surrounding area of the crematorium was filled with wooden logs and cow dung cakes. Other workers were setting up pyres as many more bodies were on their way.

"I have been working here for the last 34 years. I have seen thousands of cremations, but the current scenario is heart-wrenching. Generally, family members perform the last rites, but now they have to rely on us for everything. Many relatives request us to see their dear one’s face for one last time. We see their agony, anguish but do not allow them to come near the body owing to the fear of them contracting the virus. We remove the bodies from the ambulance that are wrapped in plastic and burn them either on the pyre or in the furnace. Some people bring their own PPE kit to perform the last rites. In such cases we only allow one person to come in" said Vilas Kamble, a crematorium worker.

The number of bodies being cremated has doubled since March. It has escalated from 20-25 to 50. After burning the body, workers collect ashes in a bowl and start the cremation of a new body as there is no time to wait. The ashes are then handed over to the family members.

The ambulance drivers and healthcare staff workers keep abreast with the crematorium workers. After the person is declared dead by the doctors, the relatives are informed and plastic wrapping of the body takes place. Ward boys or helpers working in the covid ward are allotted for this work. As these people come in direct contact with the body many get infected with the virus.

"I have been working in the covid ward for more than a year now. Sometimes I wrap bodies. Last year I tested positive for covid-19. Later my son and daughter too were tested positive. Our house is congested where there is no place for us to get quarantined. Owing to this we quarantined ourselves at different places. For 14 days we did not see each other.

"I am concerned for my family as they are at risk. I do not want them to suffer again because of me," says Ramesh Bhosle, health care worker at CPR, a government hospital in Kolhapur.

After the bodies are wrapped, they are transported to the crematorium in ambulances. There are four ambulances for carrying the dead bodies. The drivers wear PPE kits to protect themselves. It takes around two hours to transport one batch of bodies.

"Very often, drivers have to wait till the family completes payments and other paperwork. This process is time-consuming. During this time drivers prefer to stay inside the vehicle as people in the hospital premises get scared looking at them in the PPE kit. Considering this problem, we have installed small fans in the vehicles for the drivers. Together with this, we have provided them with water bottles, gloves, sanitisers, and energy drinks. We have trained them to wear a PPE kit and destroy it afterwards," says Ranjit Chile, chief fire fighting officer, Kolhapur.