We are so absorbed in our own comforts, that while having a feast at a very posh restaurant, hardly do we tend to bother that the one who is serving us with those deprived eyes is an innocent kid who should have been playing around with other kids. 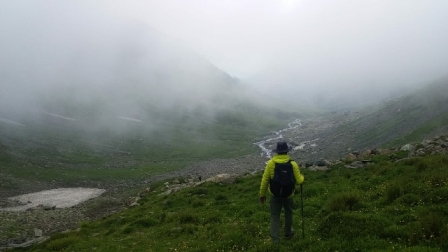 One day at a time. Photo by Peer Mudassir

If it is about living in a bubble, then most of us certainly do live in our own different bubbles, with a blurry vision of anything happening outside the bubble. However, with reference to the context of the encounter of the two gentlemen - Tushar and Matt, of living a month of their lives as an average Indian with an average income, I do not comply with the idea of anyone being unaware of the harsh realities of the average Indian lives.

All of us do keep up with the news and statistics of the economic growth in our country, and hardly do we tend to be unaware or ignorant. We, the officially declared or proclaimed middle class Indians do know the miseries of average Indian folks and their struggle to fend for their daily needs.

We are aware of the fact that, Indian society rather the economic setup is such that, the rich get richer and the poor get poorer. Do we not know that one of the largest slums in the world, Dharavi is in Mumbai, the city which is ironically called the city of dreams. Also, if we are unaware of all this then we are ignorant of the worst form.

It is not that we are unaware, but it is the lack of sincere empathy towards the extremely underprivileged section of our society. Unlike Tushar and Matt, we do not tend to have a true desire and urge to contribute towards the betterment of human life. We tend to be self-centred, unlike Tushar and Matt who give up their comforts and luxuries just to know how life truly is if one is not born in a family with certain privileges.

According to a report published by the global agency fighting poverty, Oxfam 10% of Indians control 80% of the entire wealth of the nation and the top 1% own the jarring 58% of the nation's wealth.

This means that the wealth of just 16 people in India equals the total wealth of 600 million. The bubble that we are living in is the bubble of ignorance, negligence and lack of empathy.

We are so absorbed in our own comforts, that while having a feast at a very posh restaurant , hardly do we tend to bother that the one who is serving us with those deprived eyes is an innocent kid who should have been playing around with other kids of his age and should be in a school.

We are not sensitive towards a huge part of the population of our country , we are not sensitive enough to realize that when our kids are having a chocolate worth Rs 50 on a daily basis, several million Indians are struggling to make ends meet.

We are not good nationalists or patriots if we do not strive to make our country such that all the inequalities would be reduced and poor would no longer be poor for generations to come . Nationalism is the love that we have for our fellow countrymen, it is not about the geographical area of the country but it is about the lives of the country, those lives that make our country and undergird the strength of our country. We need to awaken ourselves from the slumber of insensitivity and inequality, and live as inclusive human beings.