In A Big Appeal, Ex-Players Unite For A Cause

Sports Icons play a game of cricket to help those affected by the bushfire. 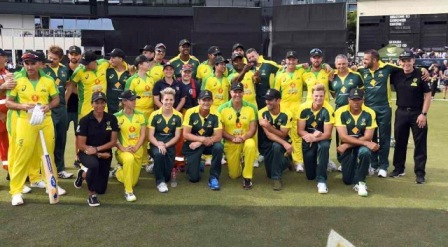 The Bushfire Cricket Bash Match, also known as ‘The Big Appeal’, was held at the Junction Oval Cricket ground (Melbourne) on Sunday morning. The cricket royalty and a few legends of the AFL (Australian Football League), also known as the ‘footy’, wore the colours of Australia and geared up for a game of cricket. The two teams were led by former Australian cricketers--Ricky Ponting and Adam Gilchrist. Ponting’s XI (PXI) had the likes of Brian Lara, Wasim Akram, Justin Langer and Matthew Hayden, while Courtney Walsh, Yuvraj Singh, Shane Watson, and Andrew Symonds played for Gilchrist’s XI (GXI).

The stalwarts of the game came together, fulfilling the dreams of cricket fans around the world. But the main purpose of this ten-over fixture was to raise funds for the Bushfire Relief Program. At the end of the game, Cricket Australia’s CEO Kevin Roberts announced that the contribution towards the relief program amounted to US $ 7.7 million.

Having won the toss, Gilchrist’s XI decided to bowl first. GXI got their first breakthrough in the second over. Just like old times, Walsh got the better of Langer and sent him back to the pavilion. Ponting’s 26 from 14 balls was nothing short of entertaining. His innings was followed by Brian Lara’s beautiful lofted cover drives and straight drives similar to his playing days. At the end of the first innings, Ponting’s XI had scored 104 runs with a loss of 5 wickets.

The run chase began with Shane Watson launching the ball all around the park. Watson’s eye-catching 30 from 9 balls, set the pace of the run chase. Andrew Symonds’s sixes over long-off made the run chase look easy. However, Wasim Akram's bowling complicated the ‘easy’ run chase.

The game was down to the final over. Dan Christian’s no-ball and a boundary scored by former AFL player Nick Riewoldt kept the victory hopes of GXI alive. With 4 runs required off the last ball, Nick Riewoldt directed the ball towards the boundary, only to be stopped by 16-year-old Phoebe Litchfield, resulting in a one-run victory for Ponting’s XI.

During the innings break, Sachin Tendulkar faced Elyse Perry and Annabel Sutherland. Walking out of the dugout five years after retirement, Sachin’s graceful strokes made cricket lovers all around the world emotional.

Commentator Trent Copeland tweeted that this game was like a two-hour snapshot of his childhood. For many, this was a trip down memory lane, but for the world, this match was an example of sports bringing people together during dark and difficult times.