Hits And Misses Of Budget 2020

Post-budget discussion on the policies of the government by Mr. N Ramachandran and Mr. M Govind Rao 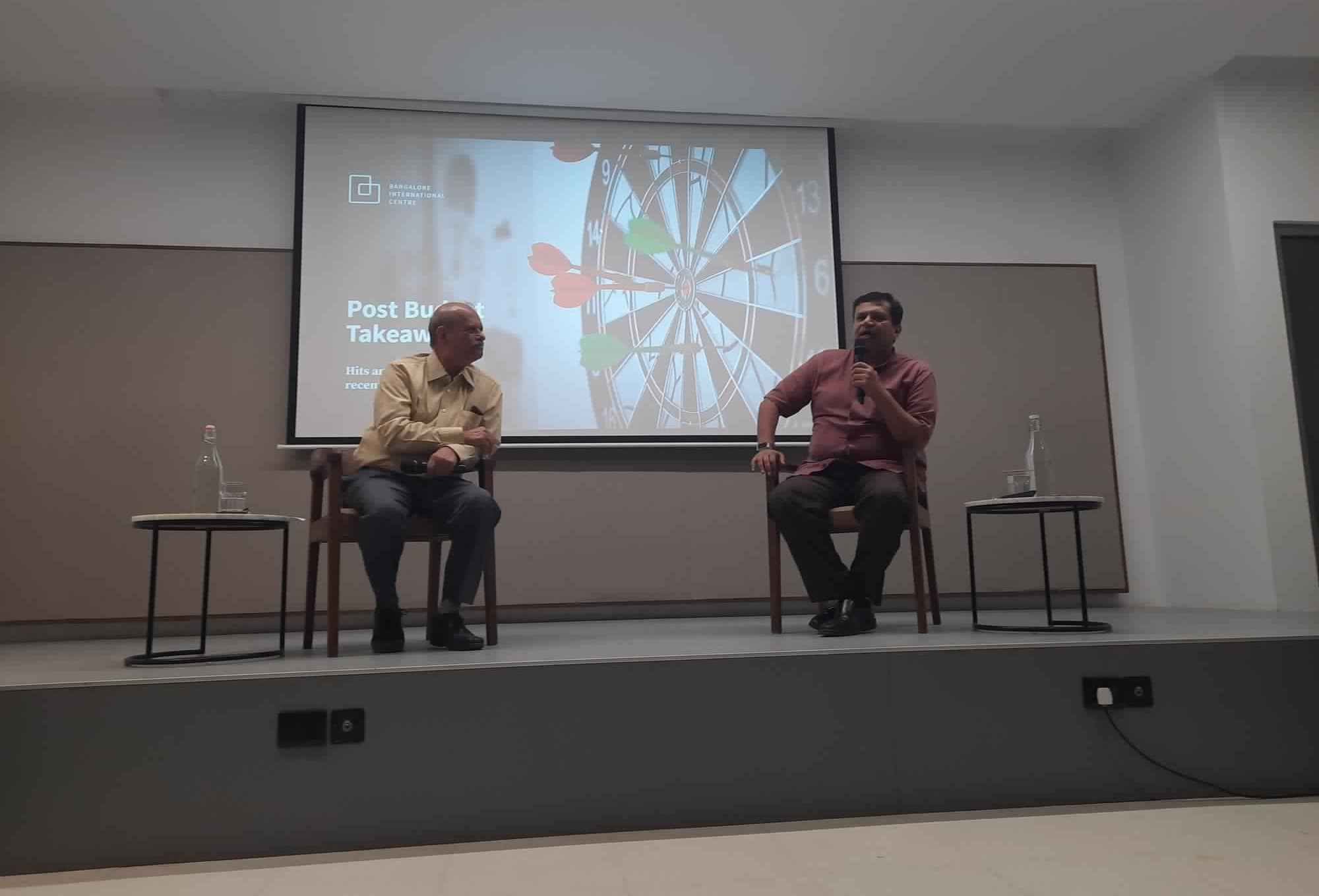 Bangalore: February 1 was full of hopes as India’s Finance Minister Nirmala Sitharaman tabled the budget for the year 2020-2021. To discuss the hits and misses of this budget, a discussion was held recently at the Bangalore International Centre (BIC). M Govind Rao (author and former member, 14th Finance Commission) and Mr. Narayan Ramachandran (writer & emerging market investor) were the speakers.

Mr. Govind Rao explained last year’s growth figures. “Last year the budget growth was 16 quarters low, and for the whole year the growth was restricted to 5% which was a 10- year-low. Investment fell from 32% GDP to 27.8% GDP,” he said. He pointed out that the Part A of the budget speech was dedicated to state subjects such as agriculture, education, rural development and health. Allocation for them is around 2.8% more than the previous year.

Mr. Ramachandran said that the present condition showed that the liberalisation era was over. “We have gone back to an administrative, somewhat statist, protectionist era that existed before the liberalisation set in,” he said. Highlighting the rising import substitution and duties on several goods, he said: “We have again used an instrument of higher duties on whole bunch of goods including furniture. Such steps make us less competitive in the world,” he added.

Mr. Govind Rao said: “NK Singh’s FRBM committee recommended that under exceptional circumstances the government could change the fiscal deposit target by half percent. The FM has invoked that and the fiscal deficit has changed marginally from 3.8 to 3.5 percent. But review committee also says that after taking these steps you should immediately return to the path. In this case, it will not come back on to the path in three years, but will take much longer time,” he added.

Looking at the off-budget liabilities he felt that it was difficult to achieve the revised estimate target. He also mentioned the example of Food Corporation of India borrowing from National Small Saving Fund, to support his point. While sharing his view on disinvestment, he said: “It is Rs. 18,000 crore till now and the revised estimate says we are going to get Rs. 65,000 crore. Are we going to collect remaining Rs. 47,000 crores in the next two months?”

Mr. Ramachandran was clear on his stand that less tax, simpler tax, and more understandable tax had led to create a better tax system. “The best option is to have a simple and transparent tax system. Tax policy is not a “Kamadhenu” (wish fulfilling cow) and you cannot have so many objectives based just on tax policies,” Mr. Govind Rao added.