Getting A Sense of "Indianness"

A walk through the eighth edition of the Bangalore Literature Festival 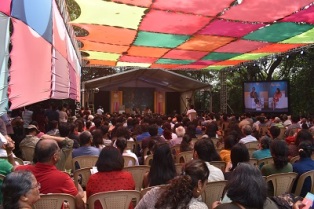 A packed session at the LitFest

Bangalore: 'Bangalore Literature Festival' is always a much-awaited event -- it attracts the finest thought leaders, thinkers, and writers from across India and the world. This year, the Ayodhya verdict coincided with day one of the fest. There were a few hiccups because of the imposition of Section 144 in the city. However, as the city remained peaceful, the crowds started pouring in and most sessions post-lunch were jam packed.

The sessions on day one had eminent speakers such as Ramachandra Guha, Jerry Pinto, Kunal Basu. There was also a talk on "Are you an Indian by birth or by blood?" This was centred around the union government's attempt to bring out a National Registry of Citizens (NRC) aimed at identifying the "legitimate" citizens.

Is the ruling party fostering a sense of "Indianness" through the NRC? This was the question raised by the author of the book "Citizenship and its Discontents", Niraja Gopal Jayal, through a talk, entitled "The 3 Worlds of Indian Citizenship". She discussed the implications of NRC and the three core issues: legal status, identity, and the rights of the citizens. "Citizenship used to be a word that was electrifying and inspiring, but not anymore," she said. The religious aspects involved in NRC and Citizenship Amendment Bill (CAB) were also explained.

In an age where social media posts often lead to heated debates on "Indianness", it is no surprise that there was a discussion titled, "People Are the New Media". This looked at how social media can be used to create your own brand. Kartik Srinivasan, author of "Be Social: Building Brand YOU Online", talked about how to use social media to build your own brand or image. It is not "likes" or "followers" but the perception you create in people's minds that takes you a long way, he felt.

This being the year in which the Indian literary scene lost one of it’s greats, the multi-faceted author, playwright (and actor) Girish Karnad, the Lit Fest venue paid tribute to Karnad in a unique manner. Two conference venues were named after Karnad’s famous plays ‘Tuglaq’ and ‘Yayati’.

For other participants, especially writers/authors, the Lit Fest proved a great opportunity to engage with their readers. The bookstore at the venue was stocked with all their works. Visitors and readers were able to thus get their copies signed by their favourite authors. And so as not to leave out young audiences, there were fun sessions for children, peppered with music, dance, and theatre.