Gender and Identity in Journalism

A conference hosted by the Network of Women in Media, India, looks at the issues women face in modern times.

A panel comprising journalists from Kashmir and the northeast

Bangalore: “Do only Muslim States persecute their people? [The Indian government] wants to harass everyone who opposes it,” said Gandhian scholar and historian Ramachandra Guha, at a public meeting recently.

Guha was part of a panel discussing ‘The Media, Citizenship, and Identities,’ organised by the Network of Women in Media, India (NWMI). The meeting was one of the several events, which were a part of the NWMI’s three-day national meet held in Bangalore.

With more than 500 members, the NWMI is a forum for women in various media professions across the country. The 15th national meeting was held from February 7 to February 9, 2020.

Female journalists from diverse backgrounds gathered to discuss issues such as climate change and disasters, journalism and culture, as well as identity and migration.

Moderated by journalist Rohini Mohan, the panel on citizenship comprised experts from the media and entertainment industries, professors, lawyers, a member of the Karnataka Muslim Mahila Andolan, and a student.

Addressing the violence at Jamia Millia Islamia University, novelist and Padma Shri awardee Shashi Despande said: “I have never seen anything like this before. I am surprised at the absence of politicians from opposition parties at these protests.”

“Indian Muslims are unaffected by the Citizenship Amendment Act. The Indian variant of Islam is different,” said professor Malini Bhattacharjee, in support of the Act. “The environment that was created following the abrogation of Article 370 and the Ayodhya verdict has made Indian Muslims insecure,” she said.

Teresa, a communications student, shed light on why students have been protesting. As one of the faces of the student movement in Bangalore, she said the protests began as a direct response to the incident at Jamia. “This is a movement in solidarity with fellow students, we do not want interference from political parties at these protests.” 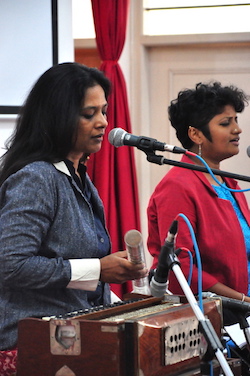 Musicians MD Pallavi and Bindhu Malini performed at the conference

“Whether we like it or not, we all carry our identities and baggage with us as journalists,” said journalist Sameera Khan during a discussion on identity and journalism, and the importance of starting conversations about gender and cultural identities in newsrooms across the country. “When our culture is lost, our identity is lost,” said Pushpa, an Adivasi journalist.

Journalists Sameera Khan and Meher Ali spoke about the implications that culture and religion have on their work, especially while reporting terrorist activities. “The hate we receive is often a result of our identity [as Indian Muslims] in these situations,” Ms Khan added.

This was followed by a session on communication clampdowns, with reference to the situations in the State of Jammu and Kashmir, and the northeast. Journalists from Kashmir and Assam spoke about the hardships they faced while reporting ground realities during the respective clampdowns. The panel discussed ways to work around State-sanctioned censorship by taking cues from the ‘pre-internet’ era and the need for empathy in highly tense situations.

On the last day of the conference, musicians MD Pallavi and Bindhu Malini performed a piece which explored expressions of gender and women’s issues through the ages. During the hour- long musical presentation, they touched upon issues of discrimination, stereotypes, and how female artists have not been given their due credit. Composers Maria Anna Mozart and Fanny Mendelssohn were used as examples.

“Radhika Santwanamu was one of the first books to be banned in India. Its only crime was that it was sensual poetry written by a woman,” said Pallavi, about the Telugu poet Muddupalini’s work that remained banned till Independence.

Following the performance, both musicians joined a panel that dealt with art and culture in times of trouble.“Artists have always spoken about injustice through their work,” said Arundhati Ghosh, executive director of the India Foundation for the Arts. The panel also spoke about an artist’s identity as well as the financial constraints and social responsibilities of an artist.

“Kashmir is an open prison,” said photojournalist Sana Irshad-Mattoo as she presented her work during the session, going on to explain how photographs and visual media can be a powerful platform to describe and document such issues.

Has there been a change in the way art is covered in mainstream media? Filmmaker Deepa Dhanraj disagrees. “Alternative online media has changed the way we report, even traditionally. The credibility of the mainstream media is questionable these days,” she said.