As rumours of Ashok Gehlot being the Gandhis’ favoured face for the party president surface, Atul Ranjan dissects the deal placed before Gehlot. 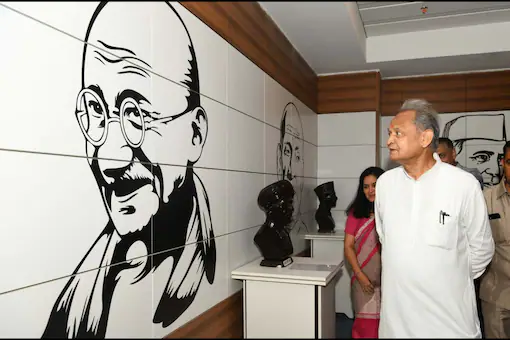 Will Ashok Gehlot agree to shift his base to Delhi? Credits:Twitter (@ashokgehlot51)

It was in March 1998 that the wife of former Prime Minister, Rajiv Gandhi, and the current party president Sonia Gandhi took over the reins of the Congress. The crowning of Sonia Gandhi was a silent coup when her (growing number of) loyalists in the Congress Working Committee (CWC) pulled the plug on the then-party chief Sitaram Kesri.

Kesri, a classic Congressman who rose through the party ranks in the Indira days, remained a family loyalist until the ‘if Deve Gowda could be, why can’t I' syndrome caught up with him.

In the autumn years of his political life, the Bihari politician grew disenchanted with the Gandhi family (read Sonia Gandhi). Ironically, it was Sonia who brought him to the helm to clip the wings of Narasimha Rao. His tenure as the party chief ended prematurely in an unceremonious way after he began to flex his muscles and started sidelining those seen to be loyal to Sonia. He had clearly broken Sonia’s trust. She has continued to hold the post even as decades have passed, barring a small period of 2017-19.

Today when her party is down in the dumps, reeling under a consecutive streak of electoral losses and exits, she is looking towards a trusted lieutenant to pass the baton to, as her son Rahul refuses to take up the job again.

Rajasthan chief minister Ashok Gehlot, a veteran and a family loyalist, is said to be the choice of the Gandhis for the party’s presidential elections. In political circles, it is no secret that a candidate bearing the official stamp of the family is likely to emerge victorious.

The question here is if Ashok Gehlot will agree to take the plunge.

Tight Lipped about reports of him being the favoured face, Gehlot continues to bat for the Gandhis. Citing the party’s sentiments, he recently appealed for the reappointment of Rahul Gandhi, even though the latter remains reluctant.

What Gehlot would consider ideal for himself would be for him to simultaneously hold the top party post and the CM chair. However, Gehlot is too seasoned a politician to not realise the real objective behind the offer.

The party aims to hit two birds with one stone by making Gehlot the party president. The long-running saga, often turning bitter between the Rajasthan CM and the senior state leader Sachin Pilot has not only been embarrassing the party but also as the student union polls suggest is hurting the party with warring factions fighting among themselves. Unable to resolve the dispute so far, the top brass of the party seems to have reached a potential solution. Getting Gehlot in Delhi could easily pave the way for the ambitious Sachin Pilot’s elevation as the Chief Minister of Rajasthan. This will end the power struggle in a state which is set to go to polls within a year and keep up the promise made by the Gandhis to a restless Sachin Pilot.

However, all this will remain wishful if Gehlot doesn’t concede. For him, any decision isn’t going to be possible without visualising the future. And the visualisation is likely to be on two fronts.

First, should he agree to pack up and shift to Delhi, where his power and freedom as the party president might not be guaranteed? The current post is second to none and has along with it absolute power that he enjoys over a population of more than eight crore people which may not be worth sacrificing for if he ends up being a pawn in the hands of the Gandhis. If loyalty is the most important credential, like in the case of Kesri, his loyalty must not be diluted. And the Gandhi family is going nowhere, or at least with regard to Rahul and Priyanka. In the case of Rahul Gandhi, he is understood to be a politician exerting power without taking responsibility.

A supplementary dilemma to this remains about the broader future of the party itself, especially in the arena of national politics. The grand old party has hit rock bottom. Should he consent to become the captain of a sinking ship? In that case, the septuagenarian will have a tough row to hoe.

Second, Ashok Gehlot must also consider the assembly elections slated to be held next year. A politician with as sharp a political acumen as his must be weighing his party’s prospects in the state too. Rampant communalism and casteism have kept dragging Rajasthan into dubious headlines, even as the unemployment scenario continues to worsen in the state. The party got a wake-up call in the form of student union election results which had an abysmal outcome for the Congress-affiliated National Students’ Union of India (NSUI).

So in 2023, can his incumbency survive the Modi-mania in a state notorious for voting out the incumbent? If he thinks otherwise, should he relinquish the new offer letter is a predicament that he must be in.

For a ‘once bitten twice shy’ Sonia, who has already learnt her lessons from the Kesri episode, she doesn’t see many options around. An experienced administrator, and a shrewd politician - Ashok Gehlot - is the man to look forward to. The ball is in Gehlot’s court now.

(Post-script: On a lighter note, too much display of loyalty can be harmful to Gehlot’s political health, in case he isn’t willing to shift to Delhi. His repeated demands of a Gandhi as the party boss may be aimed to avoid his nomination and thereby maintain the status quo, but an unwilling family may perceive it as a further testimony of his loyal credentials. In such a scenario, things may backfire for the veteran.)