A look at the lives of affected families, a week after flash floods wreaked havoc in certain areas of North-West Bangalore 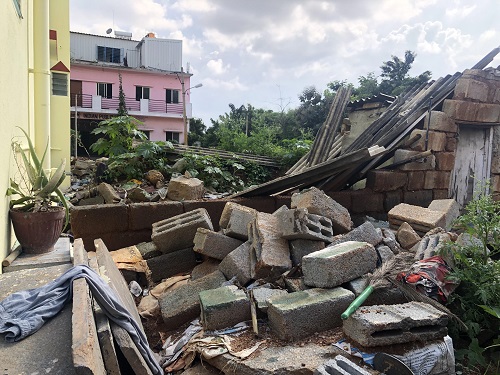 A house on Rukmini Nagar that collapsed after Doddabirakallu lake overflowed

By Hita Prakash and Roshini Muthukumar

Bangalore: In the wee hours of October 10, 2019, residents of Bhavani Nagar, Rukmini Nagar, Anandappa Layout, and Muneshwara Layout were stranded when sewage flooded 500 houses. This was because of heavy rains which caused Doddabidarakallu lake's corner bund to give way. In areas surrounding the lake, water levels reached as high as five to six feet which affected more than 100 families and submerged 300 vehicles.

Panic-gripped residents alerted BBMP (Bruhat Bengaluru Mahanagara Palike) officials and police officers. While some of them were using buckets to drain water from inside their houses, others climbed up to their roofs to save themselves from the rising water. Residents of Rukmini Nagar, a street alongside a sewerage leading to the lake, were helpless to tackle this flash flood as they hustled to save their loved ones and belongings. Vijayamma, an area resident said: "Sewage was pouring into the house from every outlet, including the kitchen sink. I was standing on my half-submerged bed waiting for the water levels to come down."

Prakash, another resident of Rukmini Nagar said, " When I walked out to see what the commotion was, I was shocked that there was water till my hips. The water was mixed with sewage and garbage, but everyone had to walk through it to grab their belongings."

The lake which is spread across 40 acres was filled to the brim and heavy rains that night caused the breach of the lake bund.

According to the local people, this is not the first time that Doddabidarakallu lake has overflowed in this manner. Venkateshamma, a daily-wage employee said: " Every monsoon, there are floods, that is why I don't own a TV set, fridge, or anything expensive because it will get ruined. But this is the first time a flash flood has happened, and I was in my hometown when it happened. When I came back, the water had ruined my store of rice, wheat, and ragi. I am now dependent on the relief fund which the government has promised us."

Ramakrishna, Revenue Inspector of BBMP, HMT Layout, said that relief funds were being allocated for affected residents based on the State Disaster Relief Fund Act. He also said, "We have initiated the process of providing relief material to 100 families already. Distribution is taking time because we have to verify the genuinely affected residents from the fake ones.”

Officials at the BBMP office stated that many houses in the flood-affected areas have been built on or located next to 'Raja Kaluves'. (Raja kaluves are stormwater drains built to channel rainwater from various parts of the city directly into lakes.) Now, with houses being built over them rainwater cannot freely flow into the lakes. Hence, when there is heavy rain, the water flows into the sewerage (and nearby areas) causing the overflow.

As part of precautionary measures, BBMP officials have formally sent a complaint about illegal encroachments. Krishnappa, an assistant engineer at the corporation office, said, “ We have informed the ‘Raja Kaluve Vibhagha’, Jayanagar. They will soon survey the area for houses built 30ft. from the drains and take immediate action against the owners.”

The houses on illegal property are owned by people living in different parts of the city. According to officials, these ‘owners’ then rent out the houses for meagre amounts to those who cannot afford better housing. So, the question is, who are the real victims here?