Two months after the implementation of FASTag, NSoJ takes a look at the progress of the scheme. 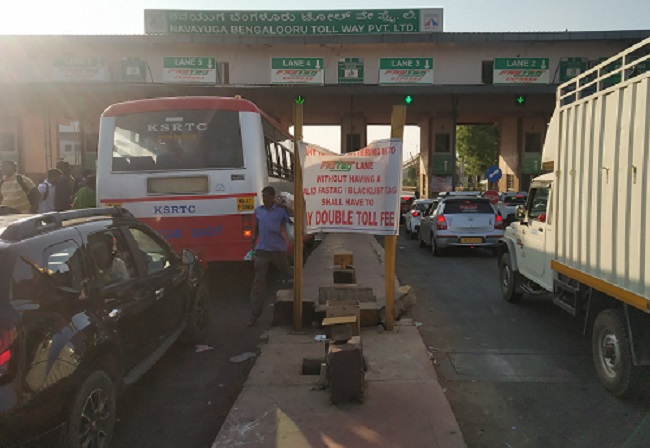 Slow movement of vehicles at a FASTag toll booth

Bangalore: The FASTag is the latest of many government schemes that was made mandatory to reduce the waiting period at all toll booths across the country. Since December 15, which was the deadline given to the citizens to adopt the scheme or pay double the amount without it, nothing much seems to have changed in terms of the benefits it offered.

Though all the lanes on the national highway was declared as FASTag lanes there have been many issues slowing down the process. These range from ignorant or under-skilled staff at toll plazas, confusion amongst motorists, and mismanagement of technology.

“This has become a nuisance as I am spending more time than I used to at the toll. How are they planning to tackle the ‘server down’ issue which most likely causes the delay?” said Manjunath, a regular commuter on the Electronic City flyover. In other instances, taxi drivers are reluctant to follow the new scheme and incidents of arguments with the toll booth employees have been reported. In a few cases, the passengers in the taxi end up making the payments to save time.

Steps are being taken in many toll booths to ensure the smooth running of this digitalized mode of payment. However, this too has a few roadblocks as of now. “We have our personnel standing at 100 metres before vehicles approach the toll plaza, with signboards, clearly guiding the motorists towards cash and FASTag lanes. People usually co-operate but there are a few who don’t. To avoid waiting in the single cash-payment lane, that has a much longer queue, non- FASTag commuters join the FASTag lane and we cannot turn them back when they are right behind the boom barrier. We are forced to accept cash which slows down the vehicles waiting behind them,” said a toll booth official.

According to reports, 60 percent of the vehicles passing through toll plazas have FASTag and this is gradually increasing every day by 2 to 3 percent. The Ministry of Road Transport and Highways (MoRTH) recently announced that free FASTags would be provided from February 15 to 29 to quicken the usage of this service and help decrease the traffic congestion. “There are definitely a few glitches in operating the FASTag considering its nascent stage. I do save a few minutes during my commutes now compared to the time I took before the scheme was made compulsory,” said Prasad, a motorist at the Nagasandra-Tumkur toll plaza.

There have been many challenges after the scheme was implemented nation-wide. Only time will tell if it will be successful or not. Making the switch to digital money transactions, in a country with the second highest population in the world, has been slow but the authorities concerned are optimistic.