Exploring Thailand off the beaten track

Taking the road less traveled to the city of ruins 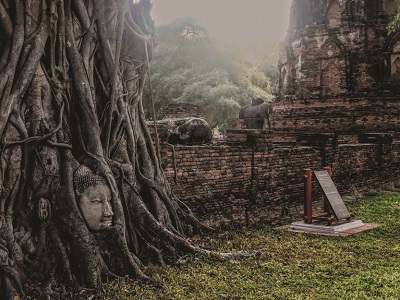 The head of Buddha made of sandstone at Wat Mahatat temple

Thailand as a tourism destination has always been all about white sand beaches, clear blue waters, luxury resorts, and never-ending nightlife. For most of us, the places to visit are Bangkok, Pattaya, Phuket, and Krabi. While these remain as popular tourist destinations, if you are a traveller who likes to take the road less traveled, then Ayutthaya, the old capital of Thailand, has to be on your bucket list.

With an invitation from Thailand Authority of Tourism, Mumbai, a student-journalist from National School of Journalism, Bangalore, went to explore a lesser-known part of Thailand, Ayutthaya.

Ayutthaya is a fertile city located, two hours away from Bangkok, in the valley of Chao Phraya River. In 1767, the city became a ghost town after it was attacked and burnt down by the Burmese army. Sixty years ago it was recognised as a UNESCO world heritage site, and the government began the restoration work.

The city of ruins not only has a long history but also a rich culture and delicious food.

Bang Pa-In Palace, also known as "The Summer house" was built in the 17th Century by King Chulalongkorn is known as 'Prasat Thong'. He had built a palace on the island of Bang Pa-In in Chao Phraya which soon fell into disuse and those who sailed past Bang Pa-In only saw a site that was neglected.

The inner house consists of residential buildings, pavilions, and gazebos in gardens. King Rama 4, while cruising across the Chao Phraya, stumbled upon the palace and felt the need to revive its beauty. He restored the worn-down buildings, dug ponds, and built a Chinese-style monastery.

One of the main highlights at Bang Pa-In palace is the 'Phra Thinang Aisawan Thiphya Art', also known as the divine seat of personal freedom, a Thai-styled pavilion, floating in the middle of the outer pond. The pavilion houses a bronze statue of King Chulalongkorn which can be viewed from a nearby bridge. An activity to entertain tourists here is fish feeding. For 20 Baht (Rs.50), you can feed five pieces of bread to hundreds of over-sized catfish.

Now Bang Pa-In palace has a Chinese-styled monastery, European-styled royal residence, a floating house, and a structure in the middle of the pond. The Chinese monastery, known as the 'Phra Thinang Wehart Chamrun' is a two-storeyed structure with red lacquer finishing. The monastery is kept locked as some of the royal families use the space as a holiday home.

"King Rama 5 was the first King from Thailand to visit Europe and to integrate European architecture in Bang Pa-in Palace," said Kun Nathaya. The contemporary structure known as Devaraj-Kunlai gate is a single-storeyed semi-circular building. The place was used as a passage by the king to access the inner court. Now it is used for setting up exhibitions. 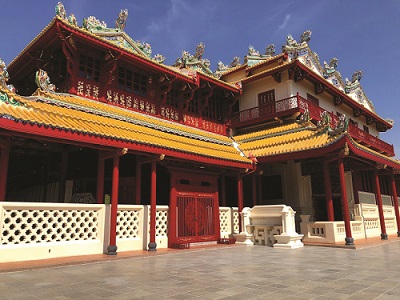 The Chinese-style monastery at Bang-Pa-In palace

'Krathong', 'Krathong', 'Krathong'.... These were the words echoing across the streets of Ayutthaya, on the banks of the Chao Phraya river. Street vendors had stacked their carts with lanterns made of Banana-plant barks, decorated with flowers, leaves, candles, and incense sticks.

On the first full moon day in November, people of Thailand offer prayers and apologies to the goddess of Chao Phraya River. The river which forms a low alluvial plain at the centre of the country flows abundantly through the year making the land very fertile. Farmers use the river's resources for agriculture and cattle-rearing in various parts of the country. On this day the entire kingdom celebrates by lighting those handmade Krathongs and letting them float on the Chao Phraya. Tourists are also made to feel part of the celebration by dressing them up in traditional Thai attire, which can be rented from a variety of stores in the city. 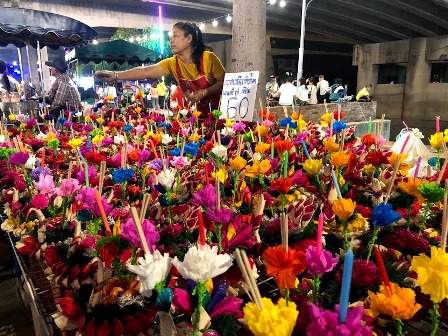 Wat Mahathat was a temple located in central Ayutthaya. It consisted of Prangs (towers), giant monasteries, multiple statues of the Buddha, and one "miraculous" sandstone structure of the Buddha. During the Burmese attack in 1767, after the city collapsed, the temple was set on fire and all Buddha statues were mutilated. "This was a terrible ordeal for the innocent people of Ayutthaya, and everyone had to abandon their homes and flee for safety. The city became a ghost town," said Kun Nathaya.

Today, Thailand, whose economy is essentially based on its tourism, has much to offer to those thousands of tourists from across the continents.