Enemies Ahead! PUBG Fever in India

As the PUBG craze grips India, it’s time to ask where we are headed. Are we lost outside the PUBG Blue Zone? 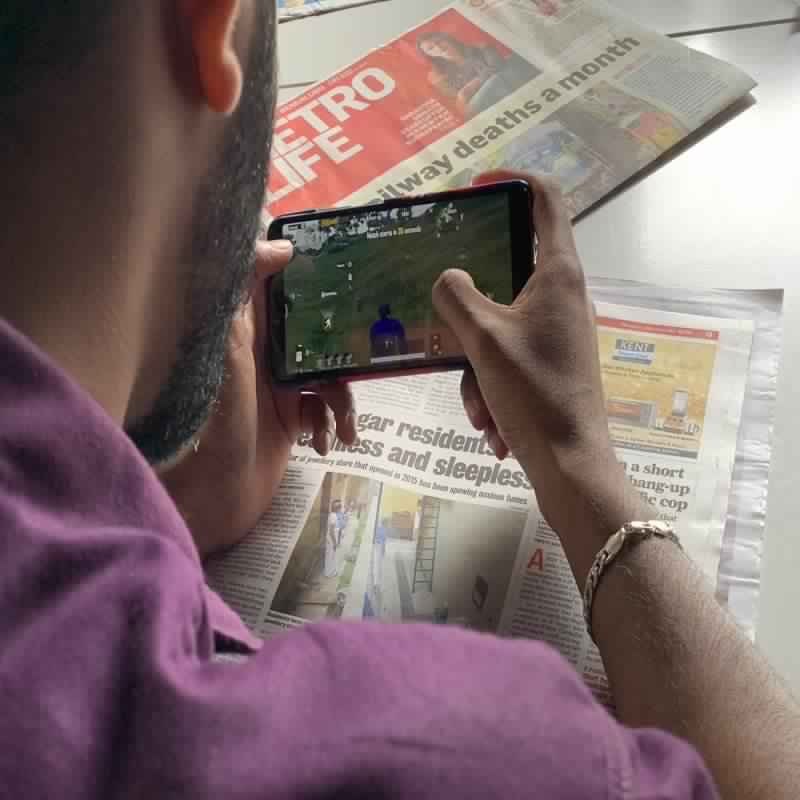 A gamer focused on playing PUBG using his mobile phone.

‘Enemies Ahead!’ Is that just a warning on Players' Unknown Battle Ground (PUBG) or is the game itself threatening our society? Should we be more alert to the dangers of gaming addiction among young people? A recent survey, conducted by the National School of Journalism (NSoJ) reveals that the PUBG craze is a game-changer, in more ways than one.

The game, brought out by Tencent Gaming (the South Korean parent company) has grabbed eyeballs world over. And it’s not just students, working professionals too are hooked. So much so that players end up sleep-deprived, missing meals etc, just to see the message ‘Winner Winner, Chicken Dinner!’ (a PUBG-tag). The game, however, was not as well-known till Tencent Gaming released a new mobile-version which could be supported on operating systems like Android and iOS.

According to a 2018 Quartz India survey, over 30 million active users play PUBG on a daily basis. India comes second in terms of PUBG user base, just behind the U.S. .The survey adds that the Indian gaming market is set to be worth $1.1 billion by 2020.

From students to professionals

So who plays PUBG? Both students and working professionals.

Junaid Wasim (12), a class VII student, residing near Laksandra in Bangalore, plays PUBG for hours on end. In fact, while speaking to this reporter, Junaid played the game non-stop! “I get a sprained neck and my finger throb from continuously playing this game,” he admits. Naturally, his father, Saiyad Wasim (43), is very unhappy. "He is wasting his time ignoring all his important tasks and studies. Youngsters are spoiling their life. Even if we call him for meals, or important errands, he ignores us all the time!" The father says his son has also changed in terms of his personality and behavior as a result of his game addiction. “Junaid talks less, is not able to focus on his studies or even play outdoor games,” he adds.

But, PUBG is also a new kind of stress buster for adults. Sayantan (23), an executive at Cognizant, says, “If you have completed your work for the day, you can spend your leisure time this way. Yes, I agree this game is addictive which is why children and even adults don’t socialize much. But I personally do not think I am addicted. I just play to de-stress. Parents, however, should be stricter with their children and only let them play PUBG for a short time,” he stresses. Suman (29), a senior laboratory technician at NIMHANS (National Institute of Mental Health and Nuero Sciences), Bangalore, also plays PUBG, but adds he does not take it seriously. , "I play it simply to de-stress. Today, people find PUBG a good stress-buster. Tomorrow, something else will come up. But I do agree it can be time-consuming. Don't take it seriously; it's just a game and a virtual world,” Suman adds.

Isat Pradhan (27), a student at BIDS (Bangalore Institute of Dental Science), agrees. "I don't think it's harmful, it’s just ‘time-pass’ The ill-effects occur if you just keep playing for a long time. People should follow the 18-plus warning included in the game. In the future, it can even become a profession too because lots of people play and earn money on the game. So, I don’t think it should be banned," he adds.

However, some players admit that the game does make them prone to aggression. Saddam (34), a businessman from Bangalore, says he has experienced this himself. "Many times, I have been rude to my wife just because she called me during my game-play. But when I do that, after some time, I feel very guilty. I realise I am neglecting my other work,” he adds.

To ban or not to ban?

In May 2019, the World Health Organisation officially included gaming disorder as a ‘disease’. So should PUBG be considered a disease? According to a news report on Livemint, “Gaming disorder is characterized by a pattern of persistent and recurring gaming behavior.” A visible symptom that has been mentioned is prioritizing gaming over other daily activities to a point where it affects relationships, work, and education.”

The survey conducted by NSoJ found that students spend approximately nine hours a day playing PUBG instead of studying. Some students this reporter spoke to compared PUBG addiction to alcohol- consumption. What’s more, it affects them psychologically, damaging emotional development, leaving them isolated and unable to socialize. However, players don’t want an outright ban. According to them, PUBG should put in stricter game-play duration so that players don’t play for more than three or four hours at a stretch. Already, a notification comes up if a player spends over six hours on the game.

But will a stricter time limit actually a make a difference?