National School of Journalism and Public Discourse (NSoJ) and DAKSH Society examine how certain legal provisions have routinely been used against journalists, academics, intellectuals and activists to stifle dissent. 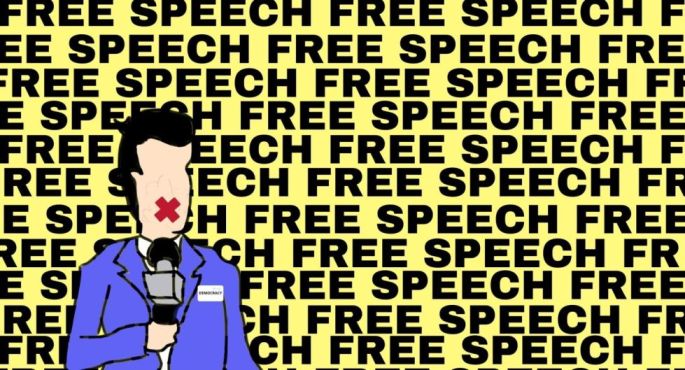 The recent bail matter of journalist Arnab Goswami opened up a long-standing problem that many dissenters in India face, that of being targeted by state forces for speaking out against ruling parties.

Goswami’s arrest in connection with the suicide of an architect whom Goswami allegedly owed money to drew criticism from various factions that believed his arrest was politically motivated. Goswami himself had written to the President of India in October 2020 seeking attention to the ‘emergency-style injustice and constant harassment...by the Maharashtra Government’. However, allegations of being targeted for one’s outspokenness is not uncommon in India.

Citizens who have strongly spoken out against actions of ruling governments have often faced the brunt of legal actions, including arrest and imprisonment. The recent announcement of the Kerala government on its intention to introduce Section 118A to the Kerala Police Act 2011 to punish those who express, publish, or disseminate any matter that is considered threatening, abusive, humiliating, or defamatory has received wide criticism for likely being a tool that will be used against dissenters. However as of today, the most common accusations levied against dissenters are that of sedition, promoting enmity between different groups or acting in prejudice to the maintenance of harmony, or violating provisions of the Unlawful Activities Prevention Act, 1967 (UAPA).

The offence of sedition under Section 124A of the Indian Penal Code, 1860 (IPC) was enacted to punish those who bring into contempt or hatred or excite or attempt to excite dissatisfaction towards the government. Although the Supreme Court has stated in the Kedarnath case (1962 AIR 955) that the offence of sedition is not made out unless the accused person incites people to violence against the government established by law or with the intention of creating public disorder, people are routinely arrested for sedition even though this requirement is not made out. The other section that is often invoked along with sedition is Section 153A of the IPC. The purpose of Section 153A is to punish individuals who (a) promote enmity, hatred, or ill will between different groups on grounds of religion, race, place of birth, residence, language, etc., (b) do any acts prejudicial to maintenance of harmony between different groups or disturb public tranquillity, or (c) organize an activity intending its participants to use force or violence against any groups that will likely cause fear or insecurity.

The case against Kanhaiya Kumar for raising alleged anti-national slogans in 2016 against the capital punishment of Afzal Guru and Maqbool Bhat is a well-known case of alleged sedition under Section 124A. Though it has been over four years since the incident, the trial is still ongoing. The case against Dr Kafeel Khan for his speech against the Citizenship (Amendment) Act, 2019 demonstrates an example of the use of Section 153A. While it has been alleged that Dr Khan’s speech was inflammatory and promoted enmity and violence, the High Court of Allahabad held otherwise when it set aside charges under the National Security Act for the preventive detention of Dr Khan. A division bench of the High Court in its order stated that “No doubt, some part of the phrases used in the grounds for detention are there in speech, but apparently in a different context. The speaker was certainly opposing the policies of the government and while doing so certain illustrations were given by him, but that nowhere reflects the eventualities demanding detention. A complete reading of the speech prima facie does not disclose any effort to promote hatred or violence. It also nowhere threatens peace and tranquillity of the city of Aligarh. The address gives a call for national integrity and unity among the citizens. The speech also deprecates any kind of violence."

A more recent example where these provisions have been invoked is the case against Manipuri journalist Kishore Chandra Wangkhem. Wangkhem was charged with sedition and promoting enmity for his response to a viral social post by the wife of a politician. The woman (from a tribal community) had written a post regarding certain derogatory comments against her by another woman (from a majority community) to which Wangkhem commented asking about the politician’s prospects in the next election given the large number of tribal voters in his constituency. Surprisingly, such a question has been seen to be one that can incite violence against the government or create public disorder.

In invoking Section 124A, it is important to strike a balance between the freedom of speech and expression and consider whether one’s actions can incite people to violence. It must be borne in mind that the offence of sedition is one of colonial import that even the framers of our Constitution had thought would be done away with. During the constitutional assembly debates regarding Article 19, KM Munshi had eloquently made the point to remove the term ‘sedition’ from being an exception to the right of free speech and expression as he did not want it to create an impression that sedition would remain an offence. Speaking on the exceptions to Article 19, he said, “use words which properly answer to the implication of the word ‘Sedition’ as understood by the present generation in a democracy...the equivocal word ‘sedition’ only is sought to be deleted from the article. Otherwise, an erroneous impression would be created that we want to perpetuate 124-A of the I. P.C. or its meaning which was considered good law in earlier days.” Interestingly, the UK abolished sedition as a criminal offence in 2009.

In addition to Sections 124A and 153A of the IPC, the other charge most often levied against dissenters is that of carrying out unlawful activities under the UAPA. The UAPA was enacted with the objective of preventing unlawful activities of individuals or associations and to deal with terrorist activities. It is important here to recognise that the definition of the term ‘unlawful activity’ refers to actions that (a) are intended to, or support a claim to, bring about cession or secession, (b) disclaim, question, disrupt or intended to disrupt the sovereignty and territorial integrity of India, or (c) cause or intend to cause dissatisfaction against India.

It is well known that prominent activists and academics such as Sudha Bharadwaj, Anand Teltumbde, Fr. Stan Swamy and others, who are known for being critical of the government, have been accused of committing offences under the UAPA and have been imprisoned for long periods during the course of their trial. In April 2020, world-renowned photojournalist Masrat Zahra was accused of violating the UAPA for posting a photo of a Kashmiri woman who suffers from PTSD (post-traumatic stress disorder) and gets frequent panic attacks even two decades after her husband was killed in an extrajudicial killing. More recently, journalist Siddique Kappan was arrested in October 2020 for allegedly violating the UAPA while on his way to report the case of a gang rape at Hathras.

The low conviction rates point to the Government using law enforcement agencies, antiquated legal provisions and the judicial system to harass and imprison journalists, academics, intellectuals and activists who attempt to question or speak against them. Also, laws relating to some of these offences like sedition, which are no longer relevant in democracies like India, need immediate reforms, and repealed if necessary, to prevent the ruling dispositions from weaponizing them to stifle free speech.

This article is a collaborative effort between NSoJ and DAKSH. Shruthi Naik, Leah Verghese, and Prathik Desai are the authors. Artwork created by Anika Gomez (NSoJ BA batch of 2022).