Though the theatre is filled with the energy of the audience in the introductory scene, a weak screenplay turns down the energy in the climax. 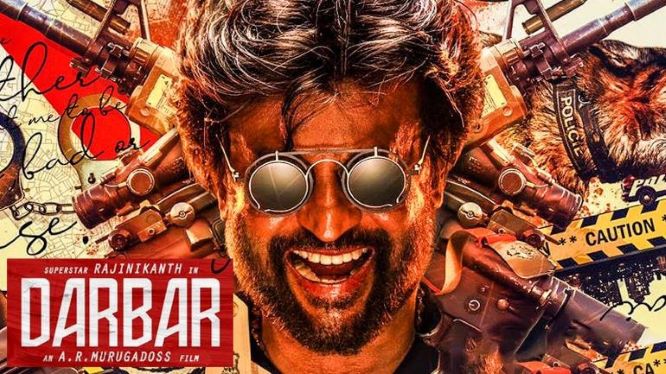 The movie begins with Police Commissioner Aaditya Arunachalam (Rajinikanth) shooting down criminals irrationally, being portrayed in the media as a crazy cop. Then comes the flashback in which he, with his daughter Valli (Nivetha Thomas), comes to Mumbai and tries to reconstruct the respect that the city police had lost twenty-seven years ago because of the leader of the drug mafia, Hari Chopra (Sunil Shetty). In an encounter, Aaditya kills Hari’s son, which brings him back to India to retaliate. The rest of the movie constitutes the climax.

With a struggling screenplay and story, the entire burden of taking the movie forward falls on Rajini’s shoulders, which he does easily. His style and swagger make the theatre echo with whistles. Lilly’s (Nayanthara) character is there only for namesake. Comedian Yogi Babu scores well with his G-rated humour. His appearance in the movie is one thing that keeps the audience awake. After watching previous antagonists such as Antony (Baasha) and Neelambari (Padayappa), Hari Chopra fails to occupy the spot in the fans’ hearts as a villain. Nivetha Thomas gives her best in her scenes, but the emotions of the relationship between the father and daughter are lacking in the screenplay!

Cinematographer Santosh Sivan’s camera creates magic on the screen. He conducts the energy to the audience, especially during a fight sequence in a railway station. The movie’s score serves to prove Anirudh’s mastery with new-age background music. The CGI quality is poor and the use of green screen is evident in a number of places.

A R Murugadoss, who gave us hits such as Ghajini and Thupakki, slips with Darbar’s story. For the movie to prove its mettle as a blockbuster, it needs better execution. Some scenes seem to be stitched together, and there is also a huge continuity error. Logic is missing in a crucial scene of the movie as well.

The theatre was packed with enthusiastic movie-goers from the ages of six to sixty. Mr Ravi, a die-hard Rajinikanth fan, said, “I am happy with thalaivar’s acting, but I am upset with the story of the movie.”

Although Rajini gives his best, Darbar falls short in hitting the line!