Politicians are not an avatar of Rama to emancipate a 'Sabri' just by breaking bread together. 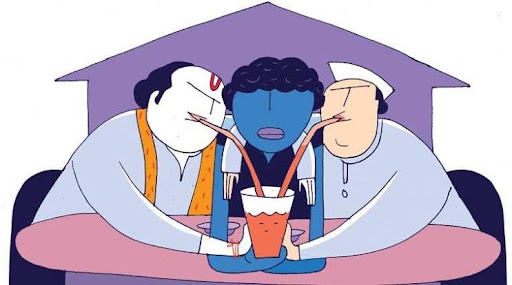 Election campaigns are all about engaging and galvanising support for oneself and the party. Amid many activities and, often overplayed gestures that contribute to the common theme of political campaigns are the visits by upper-caste politicians to a Dalit household for co-dining.

With the political heat rising owing to several assembly polls scheduled in the near future, the 'dinner-diplomacy' has begun. Up against the narrative of the OBC exodus from the state BJP camp, CM Yogi Adityanath shared a meal with one of his old Dalit party men at the latter's home and took the opportunity to cement his credentials as a leader dedicated to social justice.

The intended message underlying such tours is to showcase their commitment towards samrasta (harmony) and samanta (equality) in society.

If a politician's motive behind such a tour is taken at face value, they seem noble and upright at best and benign at worst.

However, the question that needs to be asked is, does co-dining with Dalits actually serve a purpose? Or, does something that seems innocuous to a cynic end up entrenching problematic dogmas of inequality and superiority?

Whenever images of such a shared meal are flaunted, a chunk of the commentators reacts dismissively to them as tokenism serving no real purpose.

Honestly, it's not always an exercise entirely futile.

As I write this, I am being reminded of my hometown. A community feast on various occasions sees the entire village turning up (need not say mostly the males), irrespective of their caste affiliations. This is when the host happens to be a non-Dalit.

But this isn't the case if the host is a Dalit.

Those considering themselves higher in the caste hierarchy are always absentees. Such is the traditional hold and expansive spread of this practice that the marginalised caste folks often do not consider extending a formal invitation card to upper-caste households, let alone cultivate any expectation of them turning up.

As someone who isn't the biggest fan of maa ke hath ka khana (mom's handmade food) and constantly eyeing to never miss such feasts, I did ask my mother, just once, though I already understood it very well, about this lack of reciprocation. Her answer was on predictable lines.

It hasn't been long since the appalling news of the boycott of a Dalit cook by minor upper-caste school kids in Uttarakhand came to light. Young and bright minds exhibiting the worst form of discrimination, that is, untouchability tell you how deep the rot runs.

Given the prevailing scenario, any genuine attempt by leaders & influencers to sit and eat together can assuage their anxiety to an extent where it can contribute to decimating the stereotypes and prejudices about them, which are unarguably the fundamentals of discrimination and ‘othering’.

A carefully-crafted message about the underlying promise of acceptance and accommodation, however, is a double-edged sword.

The flip side of the emancipating touch screams that this practice of “dinner-diplomacy” is yet to get acceptance. Even after 70 years of independence, a meal with a Dalit is the leading story of the day.

The truth is not just hard but a complex one too. Any such outreach by a politician or a political party doesn't seem to be genuine if it lacks suitable follow-up action. After all, politicians aren't an avatar of Rama to emancipate a Sabri merely by breaking bread together.

Work and policies must be in coherence with gestural-gimmicks at a time when the representation of Dalits in educational institutions, policymaking and white-collar job market among others, continue to be extremely low. All this while crimes against them keep surging year after year.

Symbolic and well-meant gestures of social inclusion reduce to a 'negative' tokenism if the political and economic inclusivity continues to be impaired by homogeneity.

Dalit aspirations have far outpaced the sustained bigotry of upper castes. Contemporary Dalit discourse is resolved towards 'liberation', and is no more pleading for 'emancipation'- a delusion never seeing the daylight for over seven decades now.

"The Dalit liberation doctrine brings with it the self-sufficiency and confidence of Dalits becoming a governing class that is equipped to self-rule without anyone else's deriding patronage,” writes Dalit Scholar Suraj Yengde in his book Caste Matters.

Gone are the days when a Lalu Yadav could mobilise Dalit masses just by making a surprise visit to a Dalit doorstep for a glass of sattu or by rubbing soap and water on Dalit kids while they bath.

Long ago a 'Mahatma', who had mastered the art of 'lunch-diplomacy', had deprived them of their deserved political clout, consequences of which continue to hamper their upliftment. India's Dalits are now alert against any archetypes of emancipators. They are observant and attentive and determined for total liberation.

Since liberation is "not a petition to the oppressive ruling class. It is an action that relies on blowing away the structure of oppression."