Dabangg 3 Lacks The Punch Of The Other Two

“Policewala Gunda” is something that describes the role of Salman Khan in Dabang3. Although this film is not as enjoyable as the other two by the same name to Salman’s fans, the last scene offers “paisa wasool”. 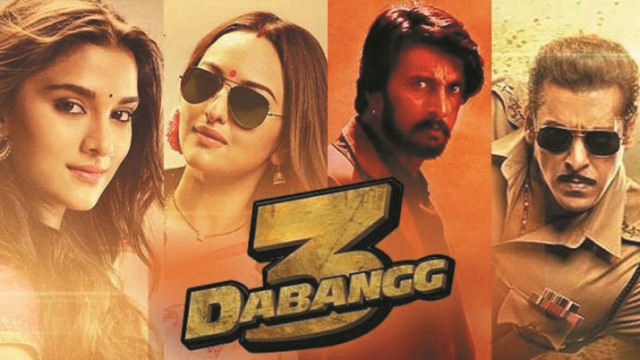 A poster of the movie “Dabangg3”

Bangalore: Chulbul Robinhood Pandey (Salman Khan) reappeared on the big screen on Friday, December 20, with a Christmas gift for his fans with the third sequence of his most popular movie series, "Dabangg".

"Ek Hota Hai Policewala, Ek Hota hai Gunda or Main Hoon Policewala Gunda": this popular dialogue depicts the character of Chulbul about how he teaches a lesson to corrupt people while supporting the right, and even after being treated with evil how he never failed and stay Dabangg.

'Dabangg 3' is beautifully linked with the first two parts of the film. The audience will get to know how a simple and chulbul “Dhakar Pandey” became a Dabangg Inspector Chulbul Pandey with a flashback.

While solving cases, Chulbul is confronted by the dreaded mafia gangster Bali (Sudeep Sanjeev/Kichcha Sudeep). Chulbul was in love with Khushi (Saiee Manjrekar) before he met Rajjo (Sonakshi Sinha), but Bali also has an eye on Khushi. As soon as Bali realizes that Khushi is in love with Chulbul, Bali kills Khushi and her entire family and blames Chulbul Pandey for this.

After spending some time in jail, Chulbul tries to save the life of a policeman in the jail on account of which he gets a chance to prove himself innocent and transforms himself into a Policeman to wipe out the criminals.

This Dabangg has failed to leave the same impact as the earlier two parts. This series is more of personal revenge of Chulbul Pandey against Bali Singh. Some scenes are unnecessarily lengthy leading to boredom. The song sequence is also not up to the mark. The most-loved part of a Salman’s film is his “entry” on the screen. Dabangg 3 fails to create this aura. However, in the climax scene when Salman goes topless, showing his body while fighting the villain, his fans have a feeling of “paisa wasool”.

The cast of this movie is good. Sonakshi as cute as in the earlier series flaunting her Indian beauty in sarees and lehengas; Saiee has played her character well as a debutant; Sudeep appears as a dangerous criminal but has very few dialogues and has played his character as Bali with his style. Whether it is action or romance, Salman has his style. Some songs in this film have also been well liked.