He originally thought of including the most controversial incidents cricket has seen but later thought it might come across as a dark book for a sport that largely symbolizes courage and triumph. 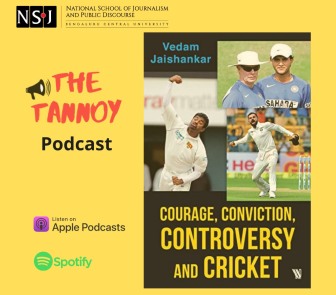 In this episode of the NSoJ Tannoy Podcast, we speak with veteran sports journalist and NSoJ faculty member, Vedam Jaishankar about his recently launched book - Courage, Conviction, Controversy, and Cricket. It is a collection of around 40 anecdotes that changed the face of cricket.

Do we need another book on cricket?

According to Mr Jaishankar, we are overloaded with information but at the same time, our attention span has dropped drastically. Keeping this in mind, you can pull out any page of his latest book and read without worrying about breaking ‘the order’ that books tend to follow.

He originally thought of including the most controversial incidents cricket has seen but later thought it might come across as a dark book for a sport that largely symbolizes courage and triumph.

The explosion of media has garnered great interest in the game and its players. He says the paparazzi are constantly following the players, leaving them with almost no private life. In this case, it is difficult to answer if controversies today are occurring more on the field or off the field.

Bodyline was a tactic introduced just before the World War but it was a watershed moment. He says many journalists and cricketers today would not understand its significance but it is crucial because it changed the laws of the game. The cricket ball was bowled at the body of the batsman rather than the stumps. The placement of fielders who were deliberately positioned to catch the ball from batsmen aimed at the ribs and throat. This was legal at that time, but seriously questioned the spirit of the game.

The ball-tampering scandal was a dark chapter surrounding the Australian cricket team that included Steve Smith, David Warner, and Cameron Bancroft. “I don’t agree that the incident of ball-tampering is the biggest controversy cricket has ever seen,” he says while discussing how he had a major argument with one of his friends. According to him, the first guy to be caught was John Lever. “I can’t believe that he put vaseline on his eyelids to prevent sweat from falling. Can you imagine applying vaseline during the summer heat?”. It was only in those three matches where he used vaseline did he succeed. He was a failure before", adds Mr Jaishankar.

After that, the Indian captain Bishan Singh Bedi lost his contract at a time when County cricket was big money. This could be directly linked to John Lever’s application of vaseline because not only did he call the Englishmen for cheating, he showed how he cheated and “that they could not stop.”

The toss between G S Vishwanath and Asif Iqbal was one of the greatest controversies. “Take into consideration two men wearing their blazers, go to toss the coin. The home team captain will toss the coin and whoever wins the toss will go and pick up the coin,” he says. You will know who is winning the toss simply by looking at the person picking up the coin. In the case of GS Vishwanath and Asif Iqbal, when the coin was tossed, Iqbal ran towards Vishwanath and shielded the coin before congratulating him for winning the toss. However, after this incident, the umpires, cameramen, and referees started coming along with the captains for the toss, something that did not happen before.

“Greg Chapell wanted to win and looked at the laws of the game to win,” he said while talking about how Greg’s youngest brother, Trevor Chappell was asked to bowl and New Zealand in that particular match needed six runs off the last bowl. To ensure that New Zealand did not get the runs they needed to win, the Australian captain, Greg Chappell, instructed the bowler (Trevor Chappell) to deliver the last ball underarm along the ground. “It was his bloody-mindedness that he would use all the loopholes to ensure that the opposition had absolutely no chance of winning,” he said explaining how Greg never looked at the spirit of the game.

Cricket has visually become an athletic sport. “Look at somebody like Yuvraj Singh. He couldn’t complete the Yo-Yo test,” he says. According to him, Virat Kohli understood the game and embraced fitness. As a captain, Kohli ensured that fitness was followed. Today, the Indian team is quick, fast, and as good as anybody in terms of fitness. This has also reached the Under-16 and Under-13 levels. With expert dieticians, trainers, and physiotherapists, the game has transformed.

The book sheds light on some of the most courageous icons of cricket such as BS Chandrashekar and Tiger Pataudi. Chandrashekar who was polio afflicted competed with fit and healthy cricketers. “Any time you talk about sportsmen, you talk about someone who is physically fit,” he says while discussing why he chose BS Chandreshakar’s story as a representation of courage. “It is like a fairytale. A guy with a handicap actually overcame that and not only played at the highest level but also excelled at it,” he says. Pataudi is another example of courage. With one eye, he led the Indian cricket team and even scored centuries overcoming a physical loss for the game.

It is more about the courage of conviction. In the case of Rahul Dravid, when India was playing against Pakistan with Sachin Tendulkar batting on 194, Dravid declared the innings considering India had already reached a good score. “It depends on whose side you are. If you are a Tendulkar fan, you would have waited till he scored a double hundred,” he says while explaining how Dravid was perfectly aware of that and was able to put the team’s interest over an individual’s values.

Having already written a biography on Rahul Dravid - Rahul Dravid: A Biography, he would like to write a biography on Indian cricketer Virat Kohli. He wishes to get into his mind and work closely to find out how he can carry himself despite how people perceive him to be. “Despite all that external aggression, he has carried a team with his personality. Today, many young cricketers in India want to be a Virat Kohli,” he adds.

Lockdown’s impact on the future of cricket

There is a possibility that the lockdown has wiped off a whole generation of young cricketers who are looking to make a mark in the cricket world. “We still do not know the long-term damage this pandemic has caused and will recover and learn about it only in the next four or five years,” he says. “But the game always proves you wrong again and again,” he concludes.