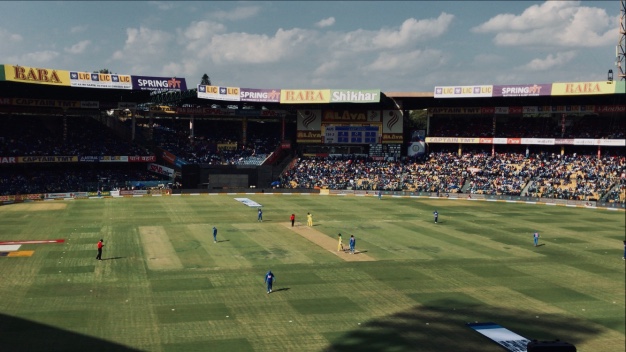 Rohit Sharma’s century and the bowling line up led by Mohammed Shami made the seven- wicket victory seem like a small redemption for Team India. With the series tied at 1-1, Chinnaswamy was buzzing with excitement to witness the decider. Having won the toss, Aaron Finch chose to bat first - a decision made based on the history of the teams batting first at Chinnaswamy and the conditions.

What looked like a promising start to the powerplay turned into a disaster for the Australians as they lost two wickets in the matter of a couple of overs. However, Steve Smith and Marnus Labuschagne’s 100-run partnership stabilized the Australian innings. While Smith scored his 9th ODI century, the Indians bowled with discipline and took wickets at regular intervals. At the end of 50 overs, Australia was nine wickets down and had piled up 287 runs. Shami was the leading wicket-taker and bagged his 200th wicket in One Day Internationals.

Local boy KL Rahul replaced an injured Shikhar Dhawan and opened the innings with Rohit Sharma. Left arm spinner Ashton Agar sent KL Rahul back to the pavilion in the 12th over and the adopted son of Banglore, Captain Virat Kohli, made his way to the pitch. Rohit’s century laid the foundation for victory while the Captain missed his 44th century by 11 runs. The duo’s 100-run partnership looked well-planned. Shreyas Iyer's quick 44 runs helped India cruise to victory. Unlike the Indian pacers, the Australian pace attack had a bad day at the office. Spinners Ashton Agar and Adam Zampa tried to slow down the chase and managed to bag one wicket each.

Through the game, India was in the front seat. Even with Smith’s century, Indians managed to stall Australia’s momentum at crucial times during the game. Defending a total at Chinnaswamy is a bowlers nightmare, with this in mind, 287 runs on the board against a batting line up like that of India’s was never enough.