Camus’s The Plague in the time of Covid-19

A brief look at Albert Camus’s 1947 novel The Plague, brings out its acute and terrifying relevance in the present global crisis. Love, hope and healing are the major takeaways from this pestilence fiction. 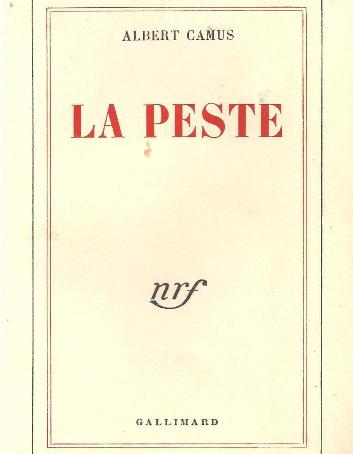 It is not without mounting horror that I finished reading Albert Camus’s The Plague in late March. It is unbelievable and frightening to note the resonance of the novel with the presently raging global pandemic. I hadn’t planned on reading this fiction with any knowledge of the novel coronavirus, it is a coincidence that I chose and proceeded with reading Camus’s Nobel Prize winning novel The Plague (La Peste originally in French)as the horror and struggle unfolding on the pages leaped out to the very world around me. The Plague by Albert Camus published in 1947 is set in the Algerian town of Oran struck suddenly by a mysterious and lethal plague that starts spreading from an unknown infection and the resulting large scale death of rats. The novel is loosely based on the Cholera epidemic after the French occupation in Algeria during 1849. The sales figures of the novel continue to rise as readers exhibit increased interest to read this pestilence fiction in the wake of Covid-19. Penguin Classics reports a whopping sales of 2156 copies sold in March including 1504 in just one week.

Narrated by Dr. Rieux, the chief character in the novel, a dedicated doctor who copes with stress, loss, duty and the horror before him, The Plague strives for an objective narrative. For a major part of the narration, the identity of the narrator is unknown. It is Dr. Rieux who first senses the signs of the plague, reporting it to the government and higher officials only to receive muted responses in the beginning. Authorities fail to acknowledge the concern of Dr. Rieux and what the onset of plague can mean, negligence reigns as infections and death are found only in rats and not humans. Terror and tragedy strike when infections start spreading to humans. Robert Zartesky, renowned philosopher and historian in Vox podcast titled ‘Future Perfect’ equates Dr. Rieux with Dr. Fauci, noting the similarities in their responses, experiences, alarm and pursuit of truth amidst this pandemic and indifference of governments. The global crisis today is witnessing panic psychosis, a rapidly accelerating hate culture in social media despite fleeting promising hints of solidarity. Reading ‘The Plague’ helps us view, review and understand the human condition in the time of crisis and quarantine. Camus’s account of the fictional plague probes different aspects of human experience- solitude, relationships, spirituality, denial, escape, selfishness, the numbing effects of a seemingly endless wait, the lost sense of time, its pressures and how it can shape and distort our view of the world.

Dr. Rieux’s words on his steadfast commitment to his job, facing the truth of death everyday highlight the fundamental human concept that has gone warped in the popular reportage of the pandemic- “ The whole thing is not about heroism……it may seem a ridiculous idea, but the only way to fight the plague is with decency.” The Plague emphasizes through Dr. Rieux how striving with decency is essential in the wake of a crisis where people are left suffering, estranged, alone with death. In the little preface to the book, Camus quotes Daniel Defoe and talks about how reasonable it is to represent one kind of imprisonment by another, the plague and the quarantine ensuing in the novel is also a kind of gruelling imprisonment where one comes face to face with death. The Plague sharply views religion, ponders death and magnificently upholds love, hope, humanity and healing in the time of isolation and separation from loved ones. The central characters and the people of Oran move from being sufferers and strive their best to be healers, bound by the pestilence that has befallen them. This is the greatest takeaway from the novel- hope, love and healing for in bidding time that can strike us with what we never expected we may be lost forever from it. The novel ends in a mingled sense of hope, horror and uncertainty over the distant future and it is distressing and alarming that it is now. This is the happy city in the present. In its chronicle and contemplation of death and disease, The Plague enables understanding what life itself is.