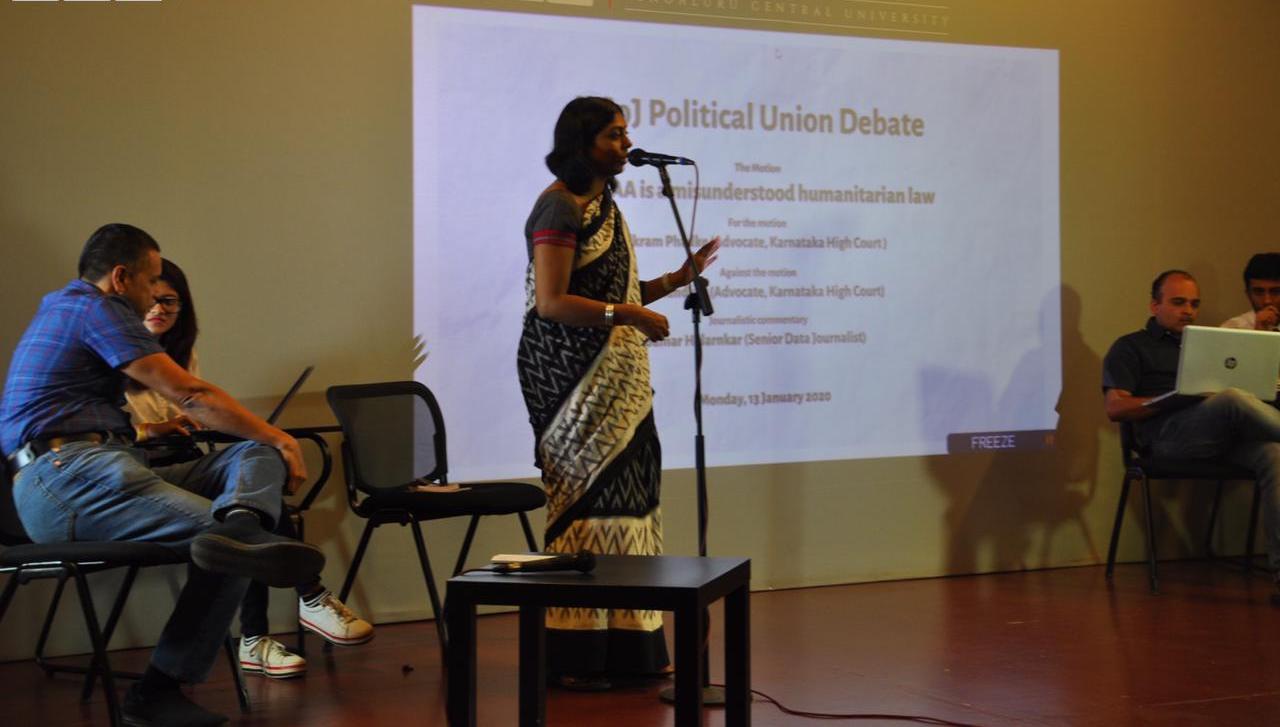 Bangalore: What is the Citizenship (Amendment) Act? Who is considered an illegal migrant? Is the CAA tied to the NRC? Such questions have become part of everyday conversations since the Act was passed in Parliament on December 11, 2019. Following its passage, the CAA was met with widespread opposition with protests erupting across several parts of India.

“Nowhere in the amendment is the phrase ‘religious persecution’ used,” said advocate Aarti Mundkur, while speaking at the National School of Journalism’s Political Union debate. Ms Mundkur was speaking against the motion, ‘The CAA is a misunderstood humanitarian law.’ “In my view, the amendment is convenient...because the Central Government has been trying very hard to make [India] a Hindu state,” she said.

“India was partitioned on the basis of religion. Hence, religion is a factor [even in] present-day India,” said advocate Vikram Phadke, while defending the motion. “If there is any mischief, the law will have to treat not only the result but the cause of this mischief,” he said while referring to the amendment’s classification of specific religions.

Calling the CAA ‘divisive’, editor of IndiaSpend.com, Samar Halarnkar, said there seems to be “no requirement for the CAA. The existing laws give the government a leeway to grant citizenship to anyone it wants.” Tying the CAA to the National Register of Citizens,

he said: “The CAA of 2003 talks about an NRC. As the Home Minister said, “chronology samajhiye” (understand the chronology). The National Population Register is the first step, the NRC the second.”

A ‘worrying’ aspect of the existing laws, he added, is the question of objections. “Once you are in the National Population Register, it doesn’t mean you are in. Even local authorities can single individuals out and question the authenticity of their documents. There is even a provision of objections from the public, as we have seen in Assam.”

Calling the amendment merely religious, “is abhorrent to the Constitution,” Mr Phadke said. Speaking of the protests across the country, he compared the present situation with that of the Emergency of 1975-77. “Everyone said there would be a loss of freedom of expression when Narendra Modi came into power. But [citizens] are out on the streets.”

Is the fact that more than thirty thousand people would benefit from the amendment has been forgotten amidst protests? “It is not about those thirty thousand people, because they have long term visas and can stay indefinitely,” Ms Mundkur said. “Under the existing laws, the government can grant long-term visas and refugee status, so why was [the 2019 amendment] needed?” she added.