Not just farmers up north, but farmers and various organisations from Karnataka marched from Majestic Railway Station till Freedom Park in Bengaluru in solidarity with the Kisan tractor rally in Delhi on January 26, 2021, the 72nd Republic Day of India. 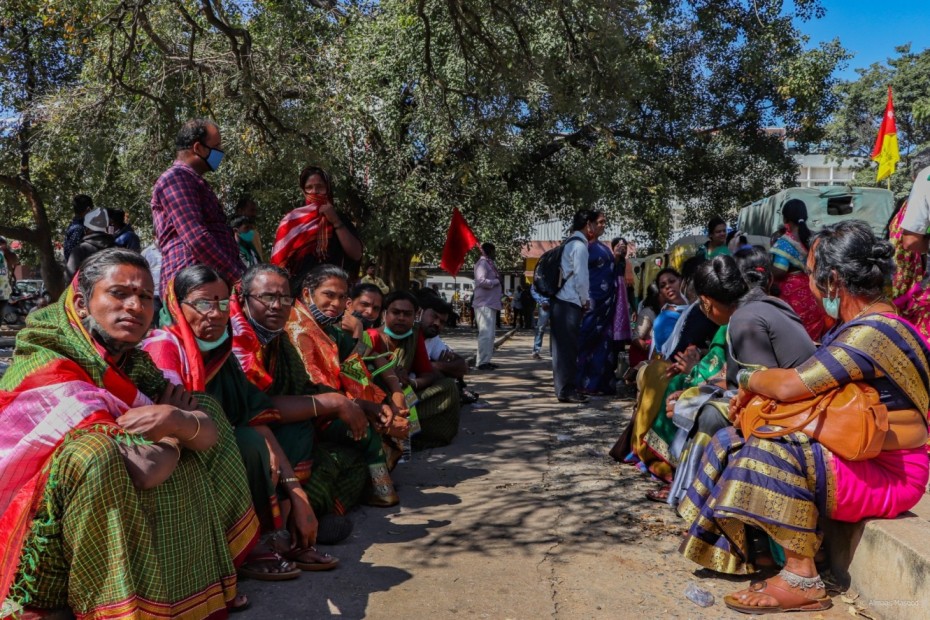 Members of Karnataka Mangalmukhi Foundation (KMF), a foundation for the transgender community, waiting for protestors to arrive.

Thousands of farmers reached Bengaluru from across the southern Indian state of Karnataka such as Kolar, Tumkur, and Mandya on tractors to protest against the Center's proposed farm laws in solidarity with the Kisan tractor rally in New Delhi on India's 72nd Republic Day.

An estimated 5,000 people, various farmer organisations, members of the Sikh community, various Dalit organisations, student-run organisations, and trade unions, joined the tractor rally on foot and marched with them from Majestic railway station to Freedom Park to protest against the Center's proposed farm laws. The protest started at 11:00 am in the morning and lasted until 4:30 pm in the evening. Of the 4000 tractors which were to enter the city, a total of five tractors made it to the main protest point at Majestic Railway Station in Bengaluru city. They were stopped from entering the city by the police citing law and order issues.

On the platform at the railway station’s parking area, piping hot food was being served to the travelling protestors. Members of the Karnataka Mangalamukhi Foundation (KMF), a statewide organisation of transgender persons, had prepared pulao enough to feed 10,000 protestors. “It is our duty. We have been brought up on the food cultivated by farmers. We are eating the rice grown by them,” said Arundhati G. Hegde, general secretary of KMF. “We all come from farmer families. So we know how important this protest is. We are here doing our part in this struggle,” added Arundhati. 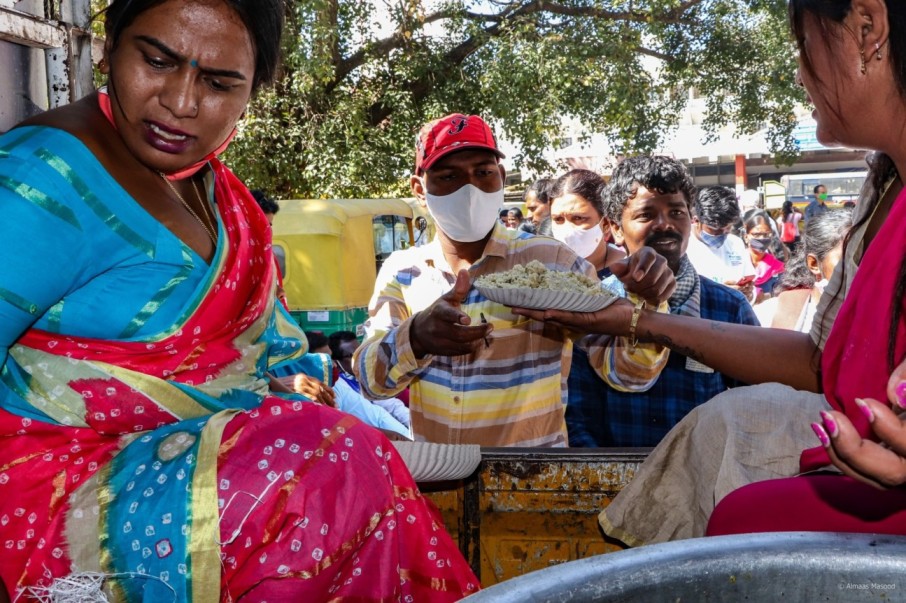 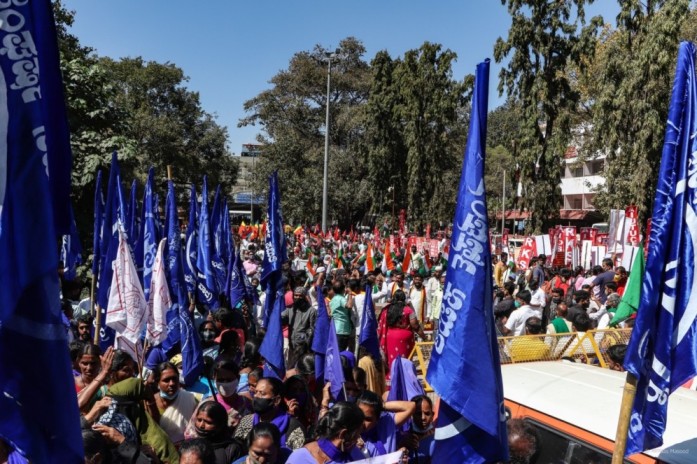 A sea of protestors at Majestic Railway Station. 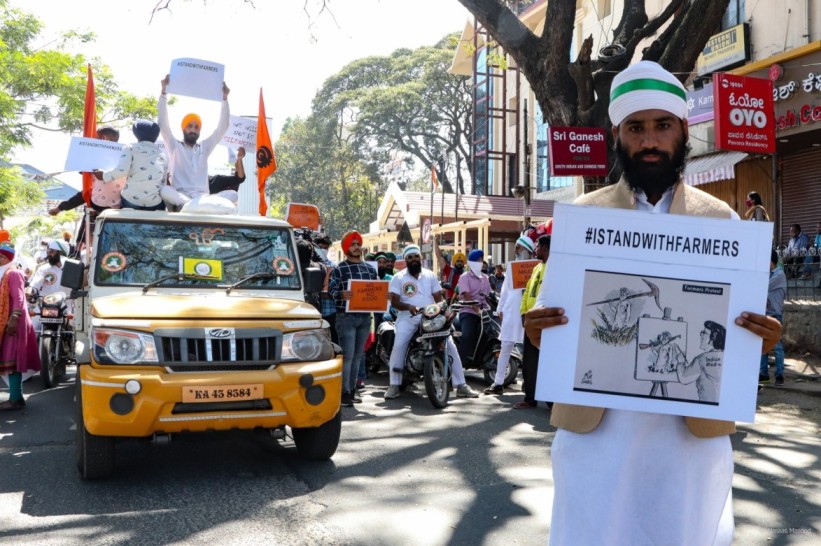 The Sikh community joined in solidarity with the Kisan Rally in Bengaluru. 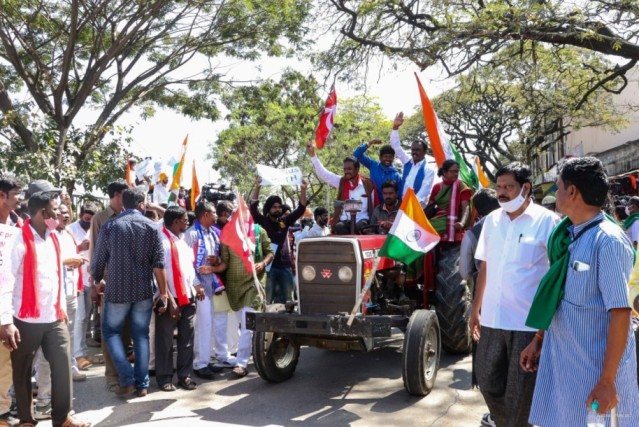 Protestors welcoming the tractors which finally arrived at the protest site. 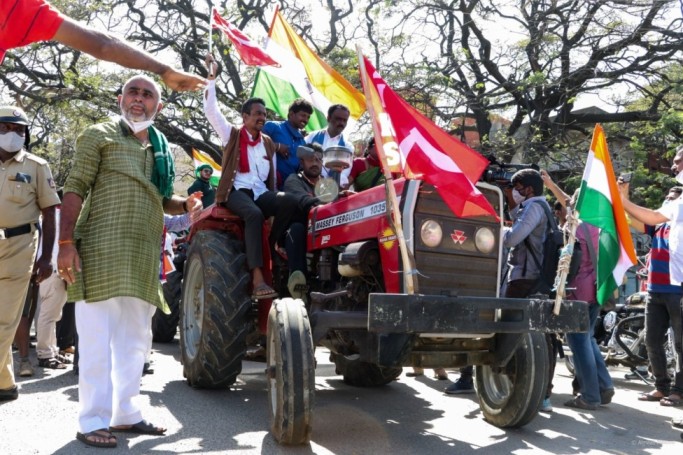 One of the five tractors which arrived at the protest site. 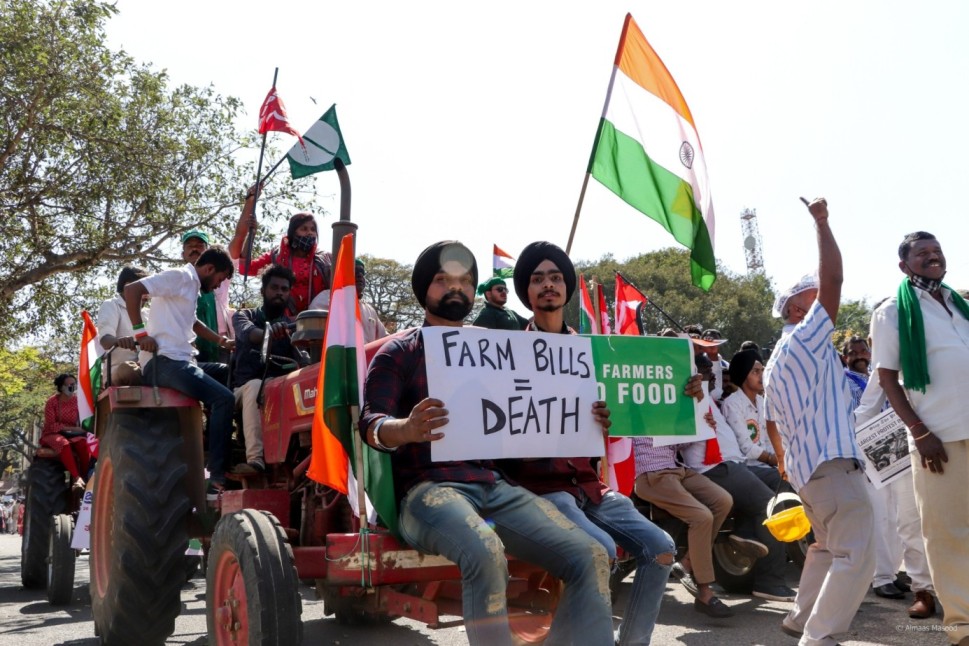 Sikh students too joined the march. 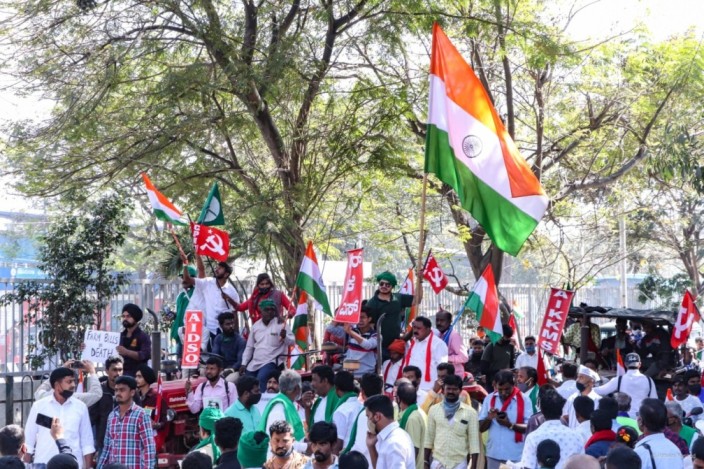 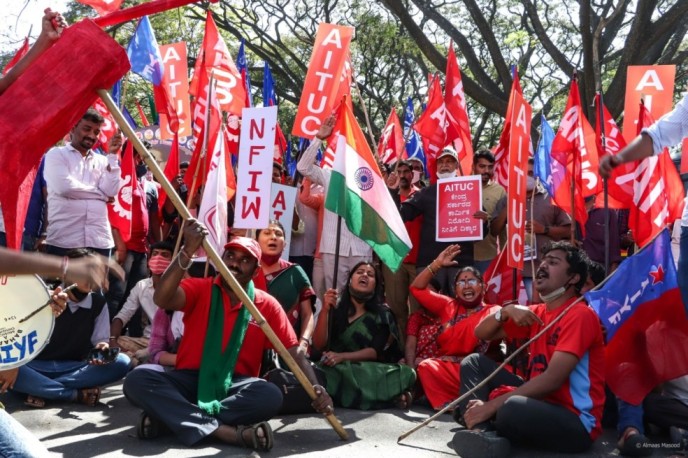 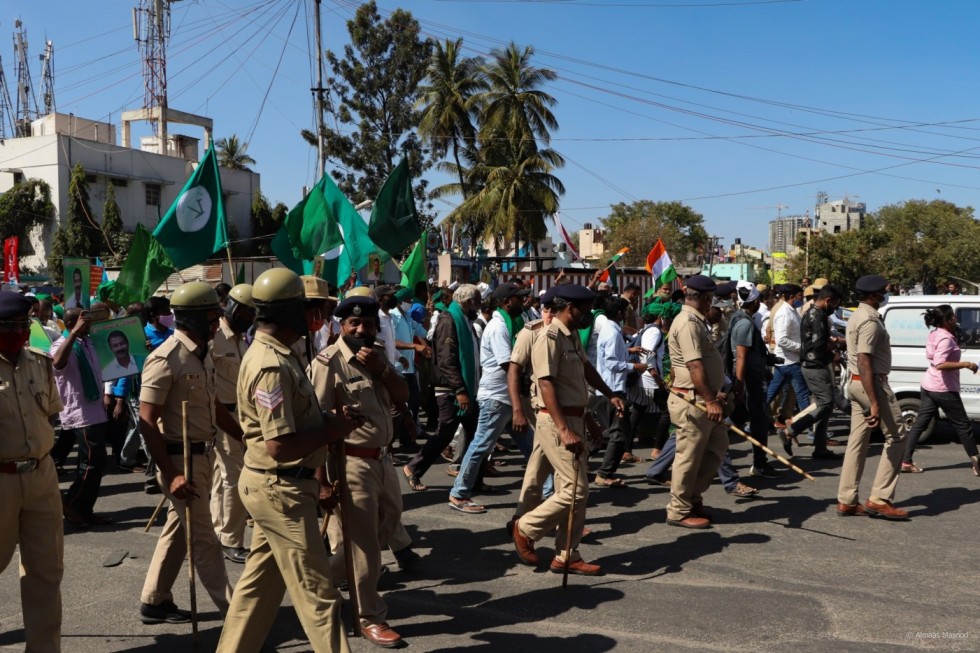 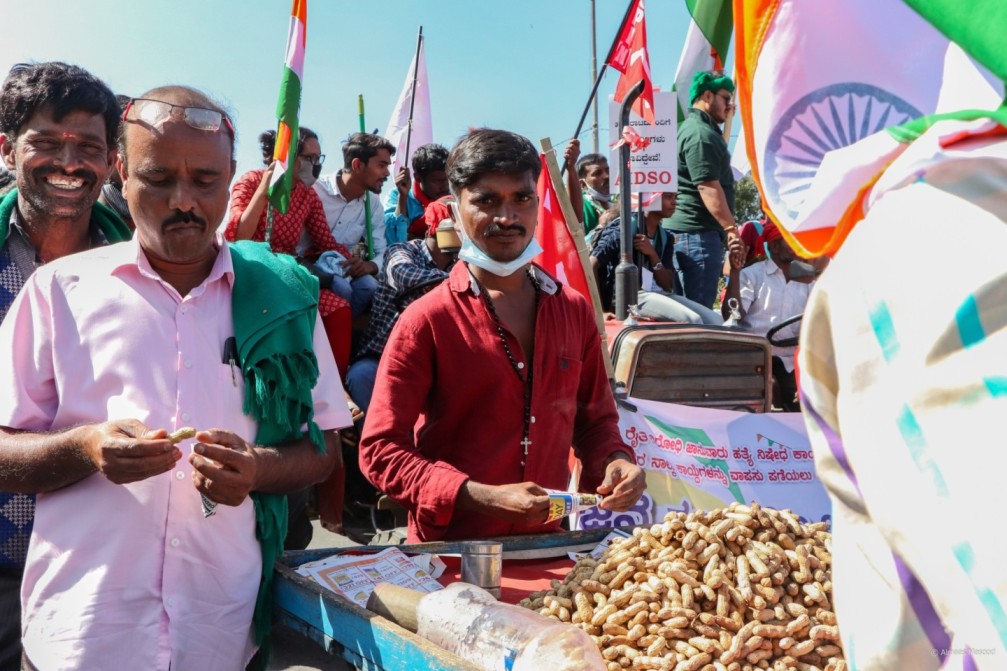 Hari, a groundnut seller, kept the protestors company from Majestic Railway station till the Freedom Park. 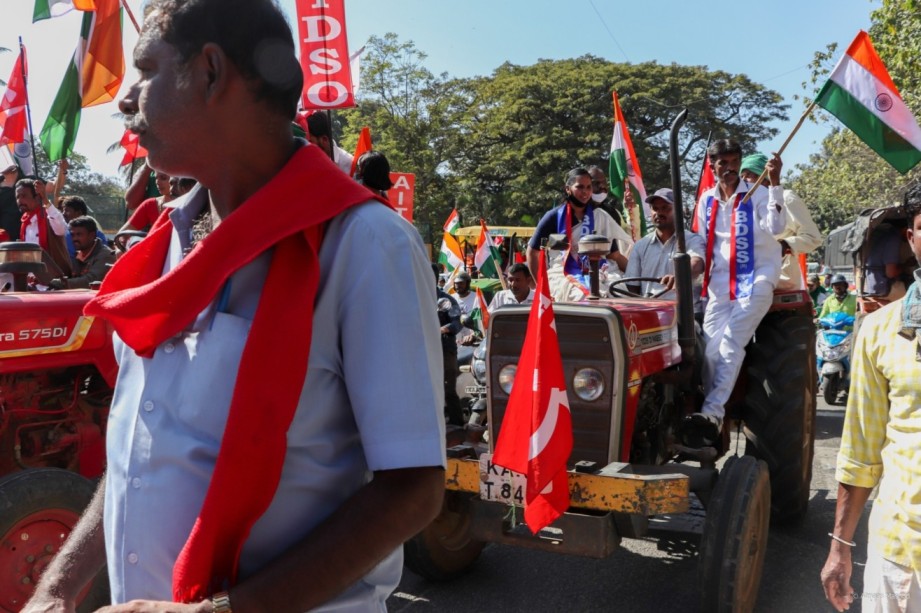 Tractors arriving at the protest site.