Behind the making of ‘Bulldozer Mama’

Once projecting himself as a secular alternative to Modi, Shivraj Singh Chouhan has bartered his soft-spoken image with that of a Hindutva hothead 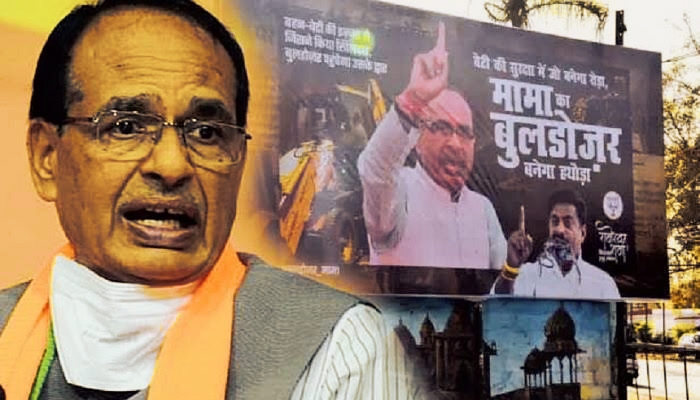 (Image modified by the author)

From a low-pitched and gentle ‘sabka’ Mama to an intemperate dog-whistling ‘Bulldozer Mama’, the changeover of Madhya Pradesh Chief Minister Shivraj Singh Chauhan is remarkably striking.

The big hoarding you see in the image above was put up by a BJP MLA last month after the houses of two rape accused were razed within a span of two days. And in the recent past, Chauhan has time and again flaunted his bulldozer-action on mafias. Following the eruption of communal violence during Ram Navami celebrations, the state administration razed the houses of the alleged stone-pelters.

This straightforward emulation of UP Chief Minister Yogi Adityanath is not surprising. A few years back when UP Police began to mow down short-time criminals with suspiciously similar action, soft-spoken Shivraj, learning the trick, registered a notable shift in his tone and tenor.

Though the state didn’t witness any dramatic rise in encounter cases [if the numbers presented by Minister of State (Home) Nityanand Rai in parliament this year is to go by], Shivraj is ‘acting tough’ on law and order by issuing Adityanath-like-threats from public forums.

As of today, Chauhan has been presiding over a state repeatedly making headlines for communally charged lumpen elements going berserk. He himself has been making statements with communal undertones in his attempts to label rivals anti-Hindu.

Having grown under the Vajpayee tree, Chauhan, like the Yediyurappas and Rajes, wasn’t known for communal politics. He, in fact, once projected himself as a secular alternative to Modi. However, in his fourth term now, he seems to have bartered his soft-spoken image with that of a Hindutva hothead.

There are two key factors instrumental in the Shivraj overhaul.

Jostling for footage amidst Modi-mania

Since his takeover, Narendra Modi has not only centralised power at both the institutional and party level but also has been successful in promoting himself as the singular face behind welfare schemes and their delivery. Be it the new schemes or renamed old schemes, an overwhelming number of them are prefixed with ‘PradhanMantri’ and are publicised with his larger than life photos. [Notwithstanding the fact that as before, many of these schemes continue to have a 60:40 funding share between union and state governments, respectively. This also happens to be a big reason behind states like West Bengal giving a cold shoulder to the PMJAY or the Ayushman Yojana which is sold as a ‘Modi scheme’.]

The deliberate propensity of BJP leaders to put Modi at the centre of everything good that happens, though fetches rewards in general elections, undermines leaders like Shivraj who had made a great deal of effort throughout his three terms to cultivate a ‘welfarist’ image. This precisely explains the increasing role and influence of Modi in state elections having his own party in power. Since unlike the great shocker of 2018 assembly polls, he has lately been able to pull it off in almost all the states having a BJP incumbent regime, as the recently concluded polls showed.

Voters ( read beneficiaries) are tempted to attribute their received ‘benefits’ to Modi’s credit and are seemingly deciding to ‘strengthen his hands’ by not punishing the BJP incumbent even if they might be disappointed in them.

This has resulted in a situation of ‘political emergency’ for the likes of Shivraj who need to rejuvenate their political identity and appeal among voters on a distinct line to maintain their clout. And for a BJP CM, Hindutva- is the flavour of the season- and an easy choice.

The old-timer Shivraj is not perceived to be among the favourites of Modi-Shah. The project to sideline state satraps, who could be a challenge to the Big boss in Delhi, has on its target Mr Chouhan. After the downsizing of former Karnataka Chief Minister Yeddyurappa got complete, Vasundhara Raje in Rajasthan and Raman Singh in Chattisgarh having been initiated, Chauhan is rightly wary of him becoming the next chicken in line to be chopped.

Like in MP, Manohar Lal Khattar in Haryana is also not in the best books of the central leadership. Though given another term, the 67-year-old leader is flanked by an outspoken Home Minister Anil Vij who every then and now keeps discomforting Khattar.

On similar lines the BJP top brass has employed a hard-nosed Hindutva motormouth Narottam Mishra as the Home Minister in Madhya Pradesh, precisely to keep a check on Shivraj Chauhan. Mishra is a known hardliner and is steadily upping the bar for Shivraj to match. The latter is merely playing a catch-up game to avoid being lacking on communalism on his CV.

Additionally, Madhya Pradesh, like Rajasthan and Chhattisgarh, has strong opposition. Whatever be the precarious position of Congress in other states, the grand old party still is a mighty force in the state. The tight contest of 2018 sent alarm bells ringing to Chauhan’s ears.

However, MP is not UP. Election and the decisive issues have always revolved around its sizeable OBC population, farmers and small traders and not Muslims, apparently because unlike UP the state doesn’t have a sizeable Muslim population. So Hindutva might not be a panacea for all the Shivraj headache.