As the unemployed pressed the EVMs….

After Bihar, now UP- both notorious for caste driven voting- has unemployment as a big poll issue in their respective elections. 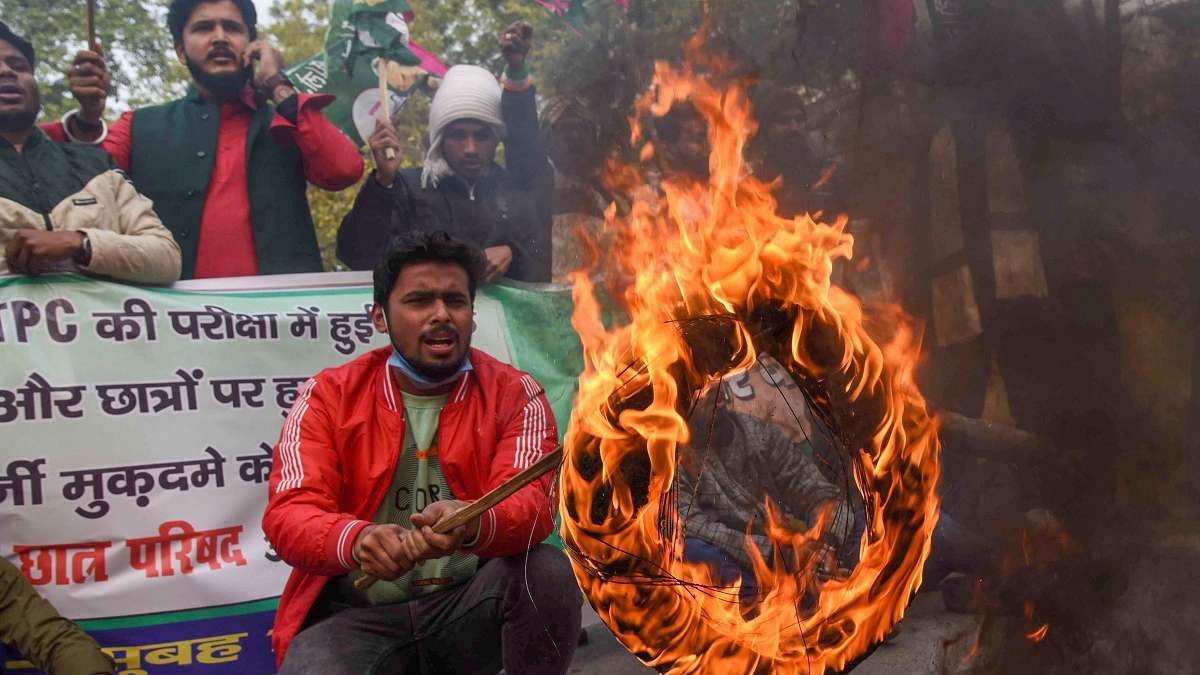 Late Union Finance Minister Arun Jaitley, in his bid to refute charges of rising unemployment, had in the 2019 budget speech, said famously- “If there is no job creation, as alleged, there should have been a great social unrest in the country. Past five years have passed off without a single major protest movement”.

While this may have held true until then, it is surely not the case today. Such is the discontent around historically high unemployment that a large-scale protest breaking out anywhere and anytime can’t be ruled out. The sword keeps lingering over the government’s head today.

As recently as in January earlier this year, unending delay over results and recruitments in railway exams outraged unemployed youth across UP and Bihar. The widespread anger then culminated into strikes and violence. Jamia-Milia-like scenes of baton-wielding police forcefully barging into a hostel in Allahabad, an educational city in the poll-bound UP, and thrashing students depicted the frustration of a state irritated by a sustained and impactful stir, led entirely by students.

The protests were not the only ones. For some time around now, multiple, relatively smaller, showdowns have been observed in the state. The rage over job scarcity did also reach the ruling party poll rally when agitated youth disrupted Rajnath Singh’s address in UP and raised slogans over joblessness.

The rival challengers, Akhilesh and his alliance partners having ears on the ground, did promise everything from the moon to stars to woo the discontent voting bloc. When the incumbent CM Adityanath, as a part of his usual dog-whistle, threatened to evaporate ‘garmi’, of people better known to him, the opposition responded by repeating- “wo kahte hain ‘garmi’ nikaal denge, hum kahte hain ki ‘bharti’ nikaal denge”. Basically offering promises of job openings contrary to the CM’s hollow and unrelated rhetoric.

The crowd, undeniably consisting of such unemployed youths too, cheered and reciprocated to the pronouncements with a sense of optimism.

With polling coming to an end, reports suggest youths who are educated but unemployed, or for that matter even those in their college, have prioritised employment as the main issue when they pressed the button.

A particularly moving image of this mood was visible when hundreds of students, who were travelling to their districts in eastern UP, presumably to vote, raised slogans of ‘Jai Akhilesh...Jai Akhilesh’ reverberating at the Prayagraj Junction.

However, this isn’t the first instance of such kind in the immediate past. Uttar Pradesh’s neighbour Bihar, too, had set an example that a ‘real’ issue like employment could be a major poll plank. In 2020, when the last time the Bihar assembly went to elections, opposition leader Tejashwi Yadav, who single-handedly gave sleepless nights to the combined BJP-JD(U) might field attractive promises on the job front while making speeches on unemployment.

Though then it couldn’t sail the RJD ship, the many images of the crowd getting unstoppable in their cheer for the leader talking about employment, followed by results going down to the wire reflected the force enthused by the youth.

And if the near-stampede like situation in Akhilesh’s roadshows and full-house rallies are anything to go by, desperate and running-out-of-patience youth has mobilised well around his party.

The group, all through the campaign, looked poised to emerge as an electoral constituency in its own right. And, interesting it must be, that, after Bihar, now UP- both notorious for caste-based voting- has unemployment as a major election issue, the first in a country facing acute unemployment.

Running out of patience

So who are these young blood running out of patience? What pushes these students to something as extreme as setting a train ablaze?

Are they those who can be seen running early in the morning, for years without fail, waiting for army/police job openings? Are they the same who keep hitting the streets over delayed exams and recruitments? Among them, are also those worried about diminishing chances of a prized-government job due to rampant privatisation?

In the rural heartlands of UP and Bihar, packing and migrating to the best possible and affordable town is the way forward after the 12th standard. For UP, historically, but now with faded glory, Allahabad (now Prayagraj) has been the hub of education (read money-minting coaching centres) attracting youths from nearby regions. The townhouses the University of Allahabad, known as the ‘Oxford of the East' in its heydays.

Bihar, here too, predictably, doesn’t have a different story from its neighbour. A family with even meagre means tries to send their son (yes, mainly sons) to the nearby town. Those in better financial health have their boy in Patna. Finally, students, like this author, with marginally better bandwidth leave the state.

Don’t get deceived by the various financial wherewithal layered above. These wherewithals, in most cases, are the result of many adjustments and sacrifices. A mother might be delaying her surgery so that the son’s coaching fees aren't missed. A father could have sold a piece of land to fund his hope’s education.

In such families, a son is the personification of hope. A hope promising a better life to his family and parents. A hope who will mobilise resources for daughter’s marriage and many more.

Unfortunately, such burdens force these students to avoid visiting their village too often to escape the gossiping-gaze of neighbours and friends who never hesitate taking pot-shots over their ‘eternal’ studies.

For years, carrying homegrown grains and groceries, so as to avoid extra costs, to a cramped room in the city lodge and surviving on self-cooked simplistic diets is heart-breaking. (In Patna, over the years, BDC- an abstract for Bhaat-Daal-Chokha- for menu has got popular. Having spent 18 months in Patna, trust me, this BDC is too bland and unsatiating a meal to be consumed on a daily basis.)

Add to it, the delay in their own marriage caused due to the aforementioned eternity. Since states like UP and Bihar have negligible or at best inadequate private industries, people here place a big price tag on men with government jobs in the marriage market.

It is in the face of many such adverse life conditions that young bright minds of northern hinterlands are running out of patience.

The degree of simmering discontentment in the youth can lead to social problems too. Such agitated minds often tend to find the enemy among themselves by identifying any social/ethnic group as the one eating their share of pie. As Nitin Pai wrote in ThePrint- “That social protests begin to target special ethnic groups who are perceived – rightly or not – as beneficiaries of the status quo or of the current government’s policies.”

Politically speaking, none of the recent protests have grown as big as the big 1974 student movement to question the authority of the state itself. Another notable difference is the lack of leaders in these protests, unlike the inspiring leadership of the local legend Jayprakash Narayan in 1974, primarily, due to the aversion for political leaders since their presence could make protests look politically motivated.

Having said that, every election is a test of the unemployed youths if they vote for their cause or fall for diversionary emotive issues. With polling done and dusted in UP, the question is, did the unemployed youth marching to the ballot follow their Bihari brethren?