Are you tech-ready for the digital age of journalism?

Live Streaming is the future of news 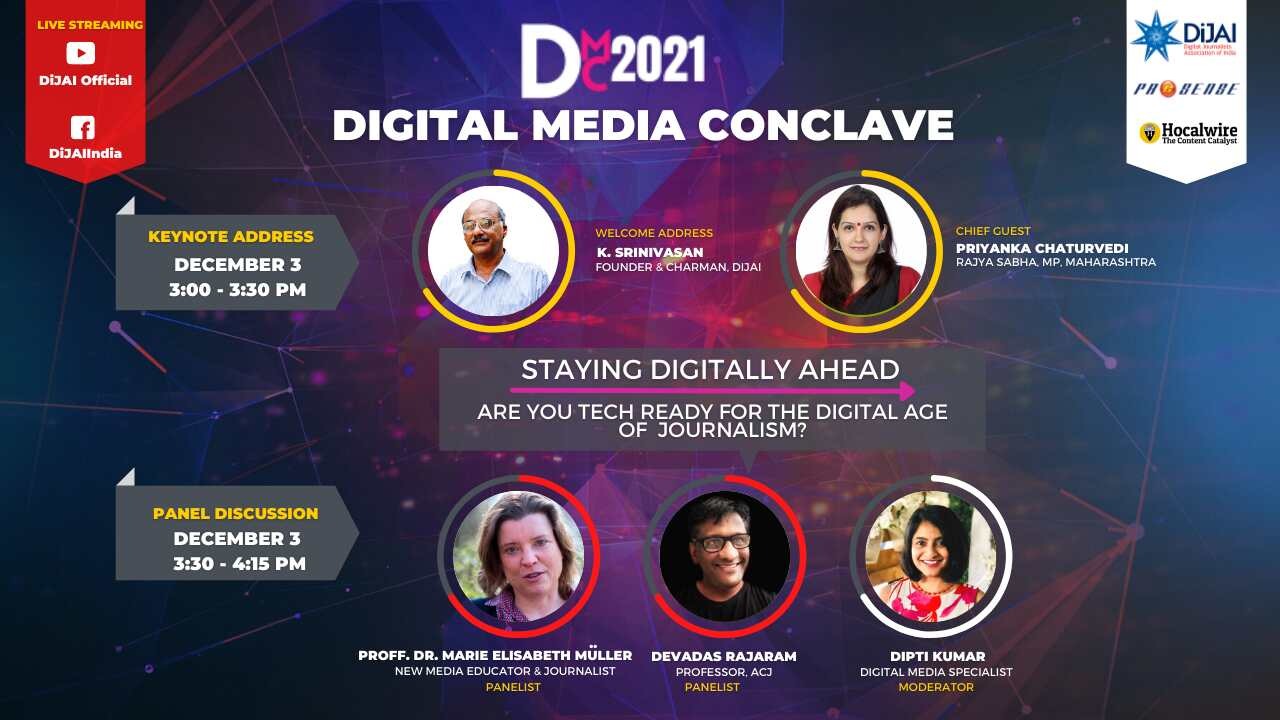 Technology plays a very crucial role in our lives. It has also caused wide-ranging effects in the newsroom as we know it. Day 2 of the Digital Media Conclave 2021 organised by the Digital Journalists’ Association of India (DiJAI), focussed on the rising influence of technology on media.

The first set of panelists consisted of Professor Devadas Rajaram, who helped popularise the concept of Pop-Up Newsrooms and is also a member of faculty at the Asian College of Journalism, Chennai. Prof. Devadas was joined by Dr Marie Elisabeth Mueller, a journalist and new media expert from Germany who also co-authored the book, “Social Storytelling” along with Prof. Devadas.

Live streaming isn’t a privilege reserved only for huge TV Corporations with access to satellite broadcasting. Most social media platforms like Facebook, Instagram, Twitter, etc now offer live streaming as an option to its viewers. This presents an untapped opportunity for Mobile Journalists or MoJos as Prof. Devadas likes to refer to them. The very idea that anyone present in an area of journalistic significance can disseminate this information to the masses with no cost involved is revolutionary by itself. Live-streaming applications like “Be.Live” are a useful tool for streaming to multiple platforms. Applications like “Wakelet” also enable tweets to be curated and even enable interviews to be taken in the Twitterverse.

Augmented reality, an important tool to present reality
Augmented Reality can be seen as an emerging technology that proves to be an effective tool to make the news much more engaging to the audience. It literally brings the news to life for the audience to perceive and visualise the piece of news they are consuming. Dr. Marie Elisabeth Mueller gives a real-life example of how students of Syracuse University developed an immersive media tool based project called “Visualising 81” which hopes to document and preserve the lives of the Jewish, Black and immigrant communities who lived in Syracuse’s 15th Ward before the construction of a 1.4-mile section of Interstate 81 which displaced these very communities from the area. She also goes on to add to her statement by saying that augmented reality will build a “Diverse, digital and tech-ready fabric for democracies”. The New York Times recently used AR technology to help users understand the InSights 2018 Mars Mission and also to commemorate the 50th Anniversary of the Moon Landing. 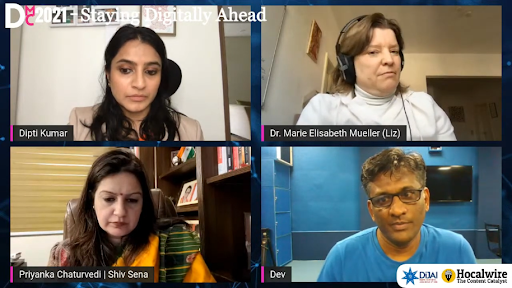 What kind of tech can be adopted in the next 5 years?
We have seen that emerging technology isn’t all about augmented or virtual reality, it is something beyond that. When we speak about a country like India, which has the largest user base of Facebook, it makes it a very significant social media hub. With changing times and increasing demands, it becomes essential that we become technologically advanced. With the metaverse being introduced to the digital world by Facebook in synergy with 5G technology, it is going to change the way we have been interacting with each other so far. Technology in India bypassed the computer revolution and directly jumped into the smartphone revolution. That's the reason we see more smartphones than human beings in India with 1.6 billion phones but 1.4 billion people. In the near future, we are going to see a paradigm shift due to the amalgamation of social media, metaverse and 5G in various fields like storytelling, education, business and so on.

Rajya Sabha Member of Parliament, Priyanka Chaturvedi from Shiv Sena joined the panel to share her insights as a digital media end-user and the impact social media can have on policymakers in the public sphere. “We need to have policies that are more inclined toward...and safeguarding data, and safeguarding what the end-users want.” She recollected the perils of social media trolls, calling for better legal frameworks to counter trolling and provide a safe space online. Priyanka also reiterated the importance of tackling fake news. “We have to look at how we control these fake stories that undermine democracies and structures that have been created, that can happen when we have true stakeholder engagement. We do it from a perspective of the nation above our politics,” she added.