A woman who fought against all odds to achieve mastery in this creative and energy-driven art form. 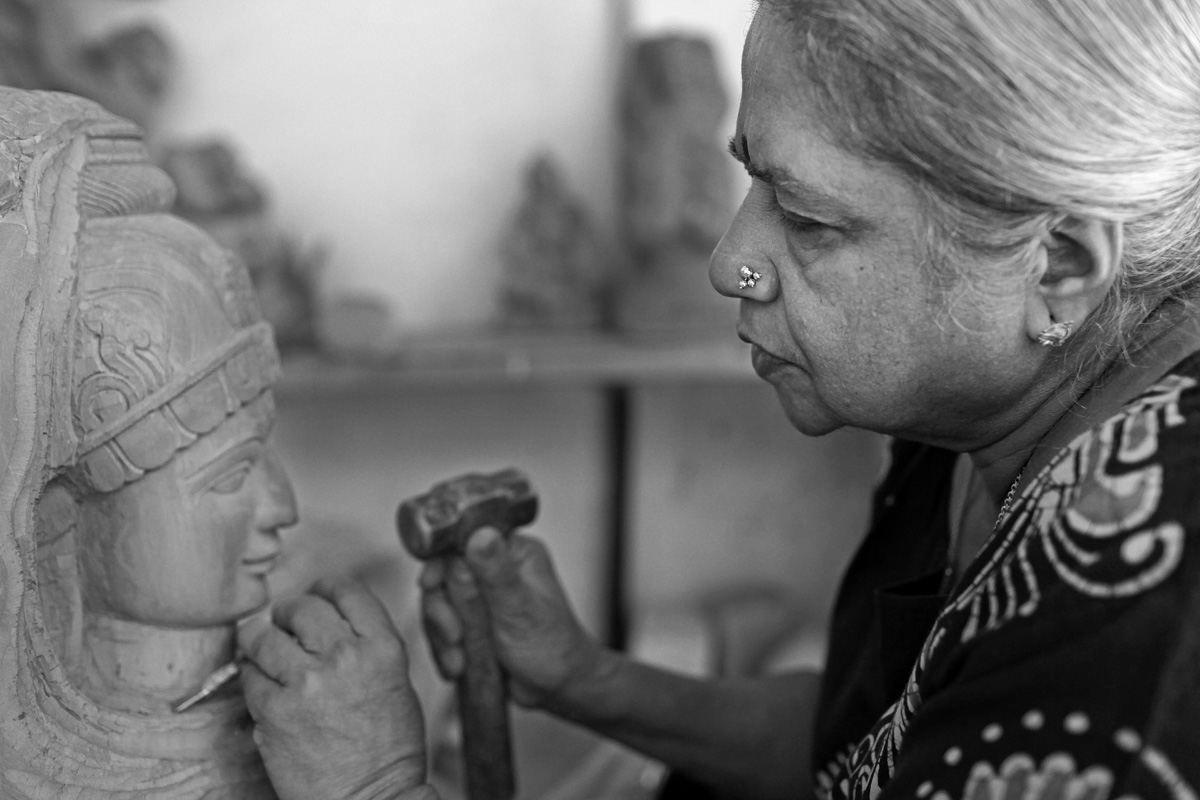 Bengaluru: The first woman sculptor of Karnataka firmly believed that all her works would stand for themselves, and people would admire her artistic talent for centuries to come. This was the reason she never put her signature on her creations.

Kanaka Murthy was born in T. Narasipura, Mysuru, in 1942 and became fascinated by the carvings at the Somnath temple in Mysuru. She came under the mentorship of Devalakunda Vadiraj and started sculpting as a passion.

Ganesh L. Bhat, a well-known sculptor, who worked alongside her under the guidance of Vadiraj, said, “I was initially surprised to see a woman in this profession. Most people during the late 1970s believed that only men can indulge in energy-driven work such as sculpting and playing musical instruments. A few of them also objected to buying an idol made by a woman as they considered it inauspicious. However, there is no artistic literature that supports this theory. Her passion transcended her ego through work and enshrined all her cast idols in temples, ashramas, and other religious institutions across the country and globe.

Kanaka came from a sound financial background, and her family consisted mostly of doctors and businessmen. Hence she didn’t get the support initially to indulge in this male-dominated career.

Regarding her approach and methods adopted in making sculptures, Mr. Bhat said, “She always gave importance to the form and the shape of the model with no compromise on its beauty. She has carved thousands of statues using varieties of stones such as sandstone, shell stone, granite, and even dark stone that were used in the construction of the parliament building in the UK.” He said that she didn’t follow just the Hoysala style of carving but also explored various other forms of Indian sculpture. “All her Ganapathi statues are still unique because of the use of contemporary designs. One of her 8-foot Ganapathi idols is installed at Puttaparthi, the headquarters of Satya Sai Trust,” he added.

Ms.Kanaka didn’t follow any specific guidelines in sculpting and instead allowed herself to be free in her thinking to create mesmerising art. One of her other notable works includes the statue of aviation pioneers Wright Brothers at the Visvesvaraya Industrial and Technological Museum (VITM), Bengaluru.

On her mastery in music and interest in literature, Mr. Bhat said, “She was a pioneer in most art forms of the country. She was a great classical singer and has made stone carvings that can produce the seven notes of Indian classical music with a gentle touch.” He said she was not only proficient and familiar with works in both English and Kannada literature, but also had a mastery of being an eloquent speaker.

The sculptor-cum-singer has done portraits of classical music legends such as Gangubai Hangal, Bhimsen Joshi, T Chowdaiah, and Mallikarjun Mansur. Apart from these, she has also done portraits of eminent Kannada novelists including Kuvempu, Shivarama Karanth, and UR Ananthmurthy. She has authored four books including an autobiography and a book on the art of sculpting. She had also learnt painting and drawing at Kalamandir, the first art school in Bengaluru.

“She is the only woman to receive the Jakanachari award, which is one of the prestigious awards given to any sculptor. She had also travelled to the UK in 1987 and carved some breathtaking sculptures.”, he added

Rajyotsava Award, Shilpakala Academy award, and Suvarna Karnataka award are some of the other accolades bestowed to her.

“She was a fantastic cook and had many including me as guests back then enjoying her culinary skills,” he gushed.

“She was jovial, outspoken, and always wished to spread happiness. She consulted her guru before making a statue.” He said that there was not even an iota of doubt in her thought process during work. As a result, she was fondly called ‘Kallu (Stone) Kanaka’.

Kanaka Murthy is a motivation to women from the orthodox strata of society who are reluctant to take up this creative pursuit. Apart from being a modern thinker, she was also rooted in her indigenous culture. By breaking taboos, she has not only become a household name through her work but also a torchbearer for future generations of sculptors to dream the impossible and fulfil it with conviction and hard work.

She is survived by her husband Mr. Narayana Murthy and son Rumi Harish.