A Ray Of Light In The Dark

K.M. Nithyananda, an 82-year-old Bangalorean, has dedicated 20 years to help provide knowledge to the blind through audiobooks. 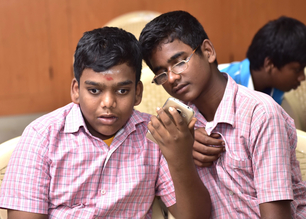 Audiobooks are available to be used for consumption on mobile phones or recorded on CDs. Courtesy: D.D Subbu

Bangalore: A person who is visually impaired is not only devoid of facilities such as easy accessibility and proper education, but also the small pleasures of life such as watching a sunset or reading a book. While most of these activities are not blind-friendly, with technological advancements, the book-reading experience is achievable through audiobooks. Audiobooks are recordings of books or text read aloud.

K.M. Nithyananda is a pioneer in this field and he has lent his voice to record over 1,000 audiobooks, covering 1.5 lakh pages. This 82-year-old Bangalorean started his professional career as a coffee salesman and retired as a pharmaceutical marketer. He has dedicated the last 20 years to provide knowledge to the blind through his audiobooks.

Not having any roots to doing social service, Mr Nithyananda explained that there were only two forces behind the work he did, his wife HS Sheela, whom he fondly referred to as madam, and Madhu Singhal, the founder of the NGO, Mitra Jyothi. “My wife is my motivator,” he said. “Sheela was a highly acclaimed doctor who was teaching at a university in Bangalore. Everyone called her madam, and so did I. If I had any exposure to doing social service before this, it was from travelling with madam to many places across Karnataka, to help her set up medical camps.”

“One evening, an old friend stopped by to visit and mentioned he was doing some social service. I was very curious and decided to go along with him to see the work he did. He took me to an NGO at Jeevan Bhima Nagar, and that was when I first met Madhu Singhal, the founder of Mitra Jyothi.” Till date, Mr Nithyananda believes that working with Mitra Jyothi started by accident, and it was not something he was looking to do.

Madhu Singhal started the organisation in 1990 to empower and enable the visually impaired people through education, training, and counselling. Mr Nithyananda said, “when I first walked into Mitra Jyothi, I met a lady who seemed normal, spoke normal, but had a different body language. She was Madhu Singhal, and she was blind.”

The visually impaired in Karnataka have a tough time getting access to reading material either in braille or through audiobooks.

Braille is a form of written language for visually impaired people, in which characters are represented by patterns of raised dots that are felt with the fingertips.

Mr Nithyananda said: “Even if they find audiobooks, they are recorded in English, and most of the students require instructions in Kannada. Madhu was my inspiration. Her mission, to enable visually impaired people to become independent individuals, inspired me a immensely.”

Mr Nithyananda spends three hours every day, at home, recording books. Initially, he would do his recordings at the NGO, but after they changed the base to HSR Layout he could not visit them. To keep his work going, the organisation converted his dining room into a recording suite and equipped it with a laptop, microphone, and the necessary software.

With an aim to provide easy access to books, Mitra Jyothi opened ‘The Education Resource Centre’, on their premises, which enables reading through a “Talking Book Library” and “Braille Transcription Centre”. The library has a collection of 3,800 books, ranging from magazines, novels, to competitive examination guides. While 600 are in Braille format, 3,200 books are audio recordings. The books are in Kannada, English, and Hindi.

The library caters to more than 8,000 members. While 3,300 are individual members, the others are special schools affiliated with the NGO. “The schools send across study material based on the syllabus which is converted into audiobooks and delivered back to the school,” said 17-year-old librarian, Lakshmi Narayana Reddy.

Being the most admired voice among the visually impaired in Mitra Jyothi, Mr Nithyananda has recorded 1,000 audiobooks for the library. “His recordings also include cassette formats, which are not being used anymore,” said the librarian.

• In 2017, approximately 68 million audiobooks were borrowed from libraries and schools in the United States.

• The audiobook industry continues to boom. US publishers reported a revenue of $940 million through audiobook sales. It has grown 24.5% year-over-year since 2017.