A Leading Light For Those Uncared For

Life of a sex-worker who now runs an NGO to help uplift the life of others like her. 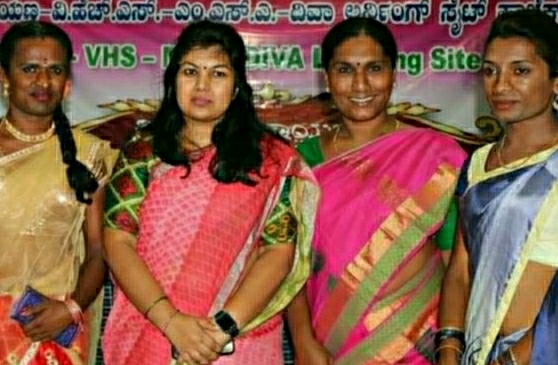 Guruma (third from left), Soumya Reddy (second from left) and two other members of Payana attending an event

By Shruti Iyer and Pavan

Bangalore: “We as an organisation are here to accept one of god’s unique creations in its original form,” said Ms Sowmya (Guruma), President of Payana, an NGO established to provide human rights to the sexuality minorities across Karnataka. The NGO functions as the voice of the transgenders who lack any identity proof, address proof, or any primary testimony.

After working as a sex-worker for a decade, Guruma had already gone through crucial and challenging stages of life from being born a transgender to being excluded from society and family. Guruma first felt the hormonal changes in her body during her school days which became one of the main reasons for her peculiar behaviour which made her friends and even teachers bully. This eventually led her to drop out when she was class ten. Asked about the plight of transgenders in Karnataka Guruma said: “There is still a sense of stigma, discrimination, and violence against us by different groups of people, including local people, gangsters, and even by policemen. This brutality leaves us with no other option than to start begging or become sex-workers”. After she became a sex-worker, the problems grew intense and got worse with time. She recalled those unbearable nights she spent under the Hebbal Flyover where she and her friends had to flee from the place whenever the police raided the area. Even with such difficulties she never thought that she would get the opportunity to head on NGO to help people like her.

“Society’s acceptance and the way people have started treating transgenders have made me happy,” said Sowmya. Apart from being the president of the NGO she also conducts team-building workshops in various universities which is her major source of income now. The government does not fund the NGO. It is funded by a foreign organisation named AJWS (American Jewish World Service) which aims to abolish poverty, fight for civil rights, provide sexual health care for girls and gender minorities, and help organisations like these around the globe.

“Our community is still to gain perks, “added Guruma when asked about the other transgenders who are living with her in a rented house on the outskirts of the city. She says that despite schemes brought in by the government to take them to the mainstream, most transgenders continue to be demeaned. “What is even there to hide about me when my whole life is an unclogged book”, said Ms. Zoya, a sex-worker, who lives with Guruma. She is still in this profession because she is an eighth-grade dropout and with no alternative left, she continues to be a sex-worker.

Today Sowmya is a muse for many other transgender people who hope that they will be able to frame a life of dignity and self-respect.