The language issue in Tamil Nadu has been kept alive since Rajaji was the Chief Minister of the State over sixty years ago. 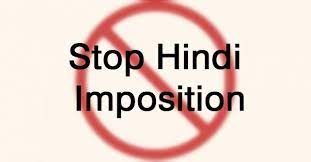 Bengaluru: “I was fifteen in Class 10 in a CBSE school and had moved to Chennai from Rajasthan. I wasn't able to speak a word of Tamil and I was bullied in school for that. There was no provision for Hindi in my school even though it followed the central syllabus. I had to work very hard to learn Tamil, just to pass the exams,” Sonu Kothari told this correspondent.

Thousands like her are facing such a predicament, particularly those whose parents are Central Government transferable employees including defence service personnel, railway employees, officers of all India services, just to mention a few.

What is the ground reality in Tamil Nadu?

The language issue in Tamil Nadu has been kept alive since Rajaji was the Chief Minister of the State over sixty years ago.

Tamil has been more than just a language for the people in Tamil Nadu, that too to a large extent because of the Dravidian parties’ political supremacy in the State since the mid-1960s. After the largest anti-Hindi protests took place in Tamil Nadu in 1964, when the then Congress government made Hindi compulsory in secondary schools, the movement against Hindi “imposition” in the state has been escalating, thanks to social media and the influence of the Dravidian parties.

The New Education Policy(NEP) has introduced a three-language policy that facilitates the Union Government to “impose” Hindi on students in the non-Hindi-speaking States. This has created unrest among non-Hindi speakers, especially in Tamil Nadu because of the roots they have in their language and more importantly the political support extended by the Chief Minister of the State and Dravida Munnetra Kazhagam (DMK) leader MK Stalin who said that Hindi cannot be made a compulsory language in India as it is not the national language.

Since the announcement of the New Education Policy, Tamil Nadu has witnessed unrest on social media platforms with statements such as “#hinditheriyadhupoda”, “#TNagainsthindiimpostion”, “#stophindiimposition,” etc.

There is also some murmur against the compulsory study of Hindi in a few other southern States. Even though the BJP government at the Center has a strong alliance with the All India Anna Dravida Munnetra Kazhagam (AIADMK) party, the party leaders, as well as the president of the BJP State unit Annamalai, have stated that if Hindi is ever imposed in Tamil Nadu forcibly they will fight against the BJP government’s decision.