A Fight For Assamese Identity?

Assamese in the city join hands with other Bangaloreans to protest the Citizenship Amendment Act saying it is a threat to their very identity. 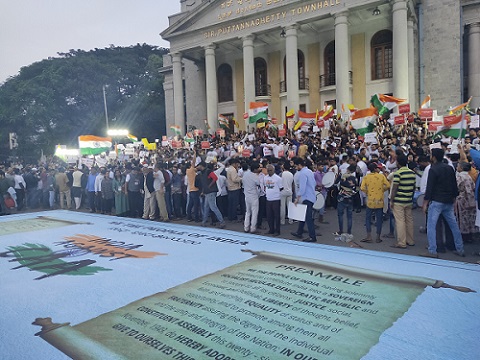 People protesting with placards against the Citizenship Amendment Act in front of Town Hall. Preetika/NSoJ

Bangalore: “Awaaz do..hum ek hai. CAB go back!” These words echoed across Bangalore, which is about 2500 kilometres away from the epicentre of the recent unrest in Assam. On 15 December, a lazy winter Sunday evening in the city, close to 2,000 people from all age-groups and faiths, gathered at the Town Hall to protest against the passing of the Citizenship Amendment Bill (now Citizenship Amendment Act) in the Parliament.

The majority of the crowd were students from Assam and various other North-eastern States who wanted their disapproval to be heard loud and clear. “Eight months before India celebrates its 74th Independence Day, there is a new freedom struggle to be fought by us for our Constitutional rights,” said a young agitated Assamese woman.

Are people's voices really being heard?

“Everyone across India is protesting against the exclusion of Muslims in the CAA. Agreed that is against the Constitution, but the issue is completely different and that is not being addressed. We do not want any foreign immigrants -- be it Hindu, Muslim or an atheist. The Assam Accord we fought for is being ignored,” said another Assamese student. Most of the participants NSoJ spoke to did not wish to be named. While some of the known names made political and religious remarks, the protesters stood their ground. They felt that the entire issue has been diverted from the actual problem. “We are a uniquely close-knit community of 1.3 million people already. With the passing of the Bill, around 1.6 million more are going to be a part of our State which threatens to dilute our culture and job opportunities. Electricity and the internet have been cut off and curfew has been imposed back in our hometowns. These are scary times for all Assamese,” added another participant.

Though there was tension in the air, what was heartwarming to witness was the gathering of multiple faiths united as one single force. Will there ever be a positive outcome to what seems to be a double-edged sword?