Is Hindi harming languages in its own backyard? Ask a Bihari.

A non-local language once adopted to create an umbrella identity is threatening the native languages today. 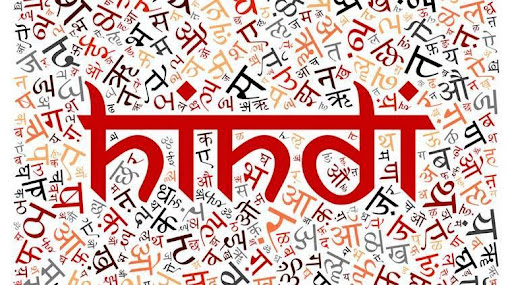 My nephew turned five this October. Two years ago, when he could barely utter a few words, this young nightmare spent more than a month at my hometown Muzaffarpur (Bihar). Coming back from a comparatively more developed and modern town of Lucknow, neighbouring Uttar Pradesh’s capital, his mom, my elder sister, often expressed concern over her son getting a hold of the local language and forgetting the ‘standard’ Hindi she trained him in. Being overly cautious, she often reprimanded us, and our mom in particular, for mixing up the languages (Bajjika, my mother-tongue) while conversing with the kid.

This frequent, but highly unwanted, entry of “dehati bhasha” into a Bihari’s Hindi is a universal disappointment for them.

Now it needs no retelling that no matter to what extent a Bihari tries to hide his identity, his language is an unfailing ‘spoiler’. In fact, this is also a laughing material in Bihar itself. However, before we elaborate on this Bihari dilemma over linguistic identity, here’s a quick recall of the local languages.

Hindu, Hindi, Hindustan
During Mughal rule, the court language was Persian. However, raj initiated drastic changes and gradually, languages like Bengali, Hindi, and Marathi alongside English began replacing Persian. In 1832, the Court of Directors of East India Company were of the view that it was “highly important that justice be delivered in a language familiar to the people”.

Noteworthy as it may be, Persian wasn’t always a language but often the script. According to Professor Alok Rai, ex-faculty of Delhi University, this began to change in the 1870s - 80s when Persian script made way for Devanagari, mainly in Bihar and central provinces. Now Hindustani began to be written in Devanagari and not Persian. 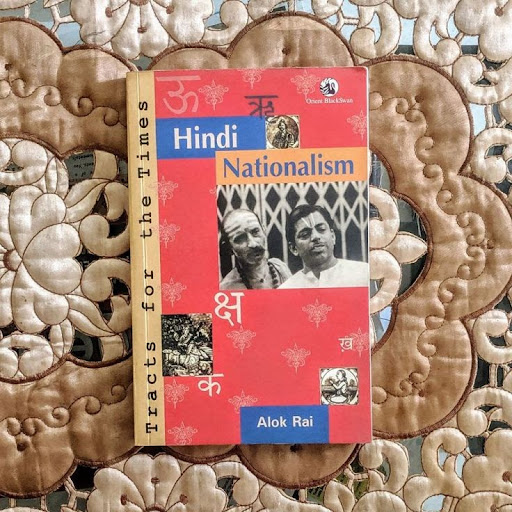 (Professor Rai in his book ‘Hindi Nationalism’ lists out a host of reasons for the rise of Devanagari. Credit: Saumya Kulshrestha)

The revolt of 1857 had sent shockwaves across the British empire. Muslims were considered to be the flag bearers of the mutiny and a great risk for the British raj due to their grip over positions dealing with daily administration. The looming danger owing to this monopoly prompted the colonial government to discard Persian (Muslims were well-versed with it) and adopt Devanagari.

The non-Muslims did not protest at all. Rather, they were happy with the development which had the potential to keep in check the domination of Muslims while also opening the doors of opportunity for them. This also soared sentiments seeking a division of Hindustani into Hindi and Urdu.

However, ancient Hindi didn’t exist in any standard form. Dialects like Avadhi, Khari Boli, Braj Bhasha etc. made up Hindi in varying forms in different regions. Khari Boli, among the ‘too many types of Hindi’, was later chosen as the standard due to its linguistic suitability vis-a-vis others, and went on to become modern-day Hindi.

The communal division of Hindustani began way back in 1800 with the establishment of Fort William College in Calcutta. According to Amit Ranjan in The Diplomat, reading materials were prepared in two different scripts: for Muslims, Urdu written in Persian script, and for Hindus, Hindi written in Devanagari script.

The dispute over languages gradually took a communal turn. As per Prof. Rai, both Hindu and Muslim elites who were up against each other, wanted to purge their languages of standardised Persian and Sanskrit words, respectively. The need for mobilization and to muster unanimous voices was obvious in the face of competing linguistic binaries erected. ‘Dialects’ of Hindi had to take a backseat. Decades down the line, it is safe to categorise many of them as collateral damages.

For a unifying identity
The last decade of the nineteenth century and the first decade of the twentieth century witnessed a sustained movement for the creation of a separate province of Bihar from the united province of Bengal. The demand was justified upon several cultural, geographical, sociological, etc. grounds. According to Alok Rai, “Bihar for Biharis” was the inspiring slogan riding on the narrative that Biharis faced discrimination at the hands of Bengalis, thus hampering their socio-economic as well as linguistic growth. 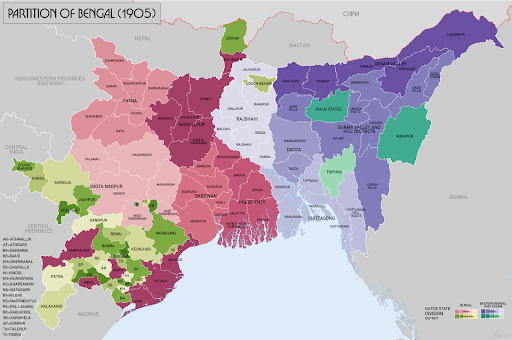 However, to corroborate the demand of a mono-linguistic state, they needed to portray a singular linguistic identity. The then Bihar was primarily fragmented into three cultural zones - Bhojpur, Magadh, and Mithila. The hunt for a unifying language ended with Devanagari’s Hindi - a language that wasn’t spoken by many (let alone the majority) - going on to become the connecting language for all of Bihar. Fascinating it must have been for a non-local language to have gained prominence because more recent examples of states like Gujarat, Tamil Nadu, Telangana etc. had dominant local languages at the forefront to portray a single unique identity.

Losing local languages
From adopting a non-local language for an umbrella identity to being at the cusp of losing its native languages (now referred to as dialects; a demotion of its own kind) at the hands of the same, Bihar has come a long way since. 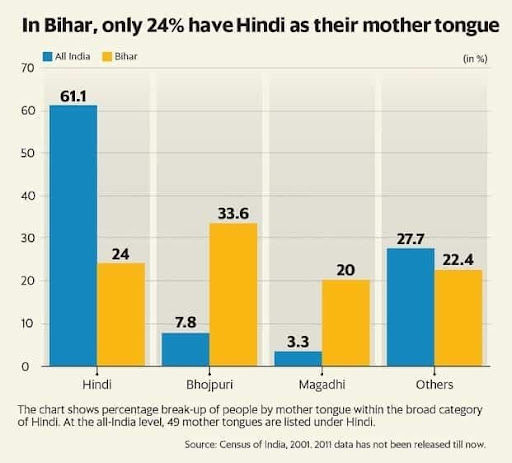 Over the years, the space for local languages/dialects in Bihar has shrunk greatly. They have lost almost their entire relevance and, consequently, reverence, too. Newbie parents are investing in seeding the abcd of ‘standard’ or a shuddh Hindi in the minds of their little one.

Again, this too is a notable departure from the usual convention seen in most parts of the country. Apart from English, the ubiquitously desired language, local languages are stressed upon for cultural and linguistic transition.

So why do Biharis these days look to insulate their speech of Bihari languages? Why are their local languages revealing their identity, undesired? What inhibits them from wearing 'Biharipan' on their sleeves?

One of the fundamental reasons for ‘Bihari’ not being a respectable brand is the eternal persistence of economic-socio backwardness in the state. Amazing as it may be, many writings indispensably have the word ‘penurious’ as an adjective while referring to Bihar.

A slew of problems arising out of the backwardness and the strengthening of a certain kind of perception over Bihari identity has worsened the prospects of the local languages. The coercive eviction of Biharis from Maharashtra and Gujarat in recent years is a case in point. The perception of a soaring number of migrants from Bihar, encroaching upon the resources and opportunities meant for locals, led to some unforgettable series of events.

(Shivsena and its Sub-nationalism school of politics are perceived to be anti-migrant. Credits: Soch/YouTube)

The natural conduct of a proper Bihari, of which his language or the consequent accent is a part, can instantly invite value judgement and dislike (mainly in Hindi heartland). Politician Manoj Tiwary, a Bihari and once a prominent Bhojpuri actor and singer, then the Delhi BJP president, was mocked for one of his old music albums titled ‘Rinkiya ke Papa’ by AAP and the CM himself (in a subtle way) during the Capital’s assembly elections in 2020. Far from being appreciated for a song that attempted to break entrenched stereotypes of a patriarchal society, the lyrics became a tool for his detractors to brand him as a non-serious comical politician. In this case, his language became, or was made a tool to embarrass him. 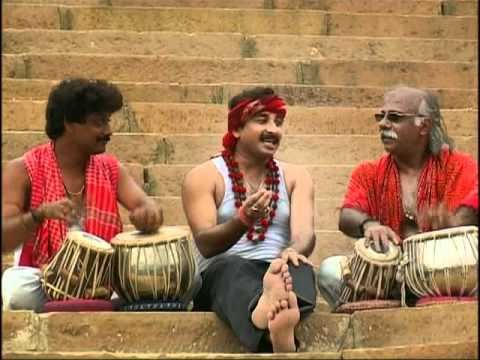 Undoubtedly, a fair share of the blame goes to Bhojpuri cinema, which acquired a reputation of having obscene and abhorrent content. The need for reigning in lumpen elements liquidating the legacy of the language under the garb of artistic freedom and creativity has become essential. The side effects of the negative image created has shown substantial impacts on the social lives of Biharis migrated to other parts of the country.

This when put in the context of the fact that Bihar has one of the highest migrating populations in the country - if a report by International Institute for Population Sciences, published in 2021, is to be believed, then 57% of households in Bihar have experienced migration, with at least one member having migrated for work or business.

The effects of the kind of treatment meted out to migrants (both blue and white-collar professionals) outside Bihar has gradually percolated down to the smaller cities. The embarrassment caused by value judgements has successfully pervaded into the psyche of small towns in Bihar. Affluent sections of society, alarmed by the 'low judgement’ attracted by their language and identity, are now discarding the use of their local languages even for daily affairs. Simultaneously, this bunch of elite-among-backwards look down upon others. And those inferiorized are villagers and marginalised sections of society who are yet to pursue what I call ‘linguistic sanskritisation’ like them.

I can vividly recall my younger days spent in the village. Whenever I used to travel to our city, my mother conversed with people in “shudh” (pure) Hindi and not the one we spoke at home. She insisted on the same to us. After a certain point, the switch became subconscious.

While speaking to The Caravan, star news anchor Anjana Om Kashyap once revealed how, in her initial days of work, it was difficult for her to impress her editors with her Bihari accent anchoring. The editors strictly wanted the Ranchi-born (then in undivided Bihar) journalist to rectify this ‘anomaly’. “When you read news, nobody should be able to identify you as a Bihari”, recalls one such editor, as quoted by Caravan. 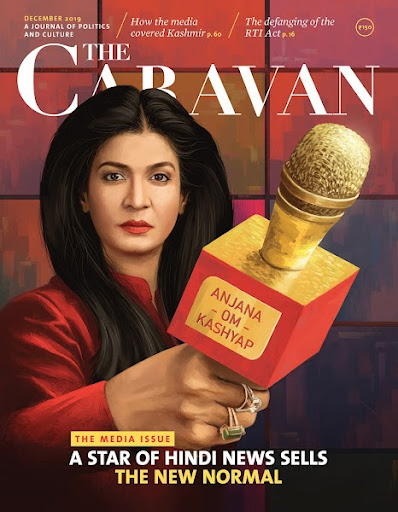 (Anjana Om Kashyap is one of the leading mainstream journalists from Bihar who commands a celebrity-like status. Credits: The Caravan)

In need of attention
Despite a spate of Biharis making it to the top echelons of the political, bureaucratic and media world, their local languages continue to languish and are endangered if not extinct, to say the least.

The attempts to rescue them are minimal. Even if there’s any, it stumbles upon some roadblock. In 2017, parliamentarian Manoj Tiwary raised the issue of including Bhojpuri in the 8th schedule of the Indian constitution. However, Hindi academia staunchly opposed this on the grounds that if Bhojpuri is separated from Hindi, it will not take long for other dialects like Magahi, Awadhi, Angika etc. to demand separate language status.

As a positive development, taking cognisance of the eroding linguistic diversity, the Bihar government earlier this year announced a soon to be adopted policy of regional languages being used as the medium of instruction in elementary schools across the state. Is this substantial a step to help the cause? Or, is it a too little, too late sort of intervention? Only time will tell.

Meanwhile, Bihar's biggest festival Chhath, is displaying the potential to rescue the likes of Bhojpuri, Maithili or Magahi. In Bihar, traditionally, the carnival songs have been composed in these languages (or dialects) and continues to be done so. This not only reminds the natives of their rich linguistic heritage but also adds value towards making these languages more acceptable to those looking down upon them.

Also, the list of top Bollywood singers joining the bandwagon to give their melodious voice to the songs of this unique festival is growing. After Anuradha Paudwal and Palak Muchhal, for instance, this year the festivity was flavoured with the voices of Sonu Nigam and Vishal Mishra.

As a fellow Bihari, one could only hope that these attempts fructify and the endangering of languages and the associated lifestyle predicaments arising out of the same, feebles.