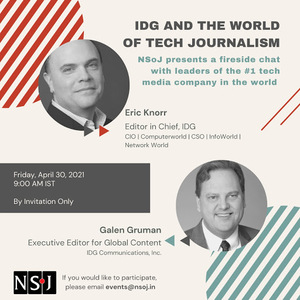 IDG and the World of Tech Journalism

Eric Knorr is the Editor in Chief of IDG’s enterprise websites: CIO, Computerworld, CSO, InfoWorld, and Network World. A technology journalist since the start of the PC era, he has developed content to serve the needs of IT professionals since the turn of the 21st century. He is the former Editor of PC World magazine, the creator of the best-selling The PC Bible, a founding editor of CNET, and the author of hundreds of articles to inform and support IT leaders and those who build, evaluate, and sustain technology for business. Eric has received Neal, ASBPE, and Computer Press Awards for journalistic excellence. He graduated from the University of Wisconsin, Madison with a BA in English.

Galen Gruman is San Francisco-based executive editor for global content at IDG’s enterprise sites, providing overall management of Africa, ASEAN, Australia, India, Middle East, Netherlands, and New Zealand editions of CIO, Computerworld, and CSO Online, and their editorial teams. His association with IDG began in 1990 as a freelance product reviewer for InfoWorld. He's focused on a variety of technologies and business issues over the years, including virtualization, mobile technology and business, user-centric computing and the digital workplace, enterprise deployment case studies, service-oriented architecture, diversity in the tech industry, macOS and iOS, Windows, and desktop publishing. He has a BA in Journalism and Political Science from the University of Southern California and he has interned at the Los Angeles Herald-Examiner and KABC-TV.