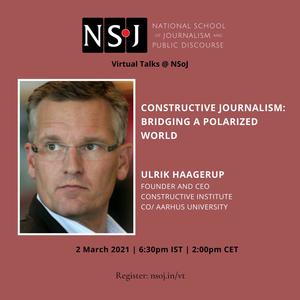 Ulrik Haagerup is an international public speaker on leadership, media, democracy, innovation and strategy. He formerly worked as the executive director of News, Danish Broadcasting, DR and former Editor-in-chief at NORDJYSKE Media.

He was the chairman of the Center of Journalism at the University of Southern Denmark from 2002-2008. He worked as an investigative reporter and senior managing editor at Jyllands-Posten from 1986-1994.

He has been a member of the World Economic Forum Global Agenda Council on the Future of Journalism and has won The Cavling Prize in 1990.

Link to the video

Link to the Q and A session.