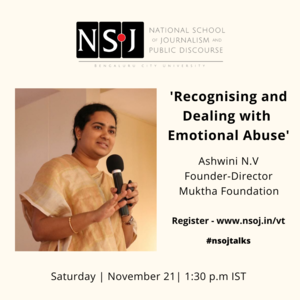 Ashwini N.V is the founder-director of Muktha Foundation, an organization committed to the prevention of interpersonal abuse and promotion of mental health. Previously, she was a faculty member in the Post Graduate Department of Psychological Counselling/Psychology at Montfort College, and Jain University, Bangalore. She is a counselling psychologist with practice and research interest in the area of intervention and prevention of interpersonal violence such as intimate partner violence, child abuse, bullying etc.

She was recognized as one of the '100 leaders under 30’ from across the globe for her idea titled ‘FOCUS formula to foster mental health in low and middle-income countries’ at St. Gallen Symposium, Switzerland in May 2015. Muktha Foundation was appreciated by Kailash Satyarthi, Nobel Peace Prize Winner for its collaboration with Young Indians of Confederation of Indian Industries (CII) for the Project - Masoom, a nation-wide initiative to prevent child sexual abuse in September 2017. She is the recipient of Rotary Bangalore’s Vocational Service Award 2018-19 for her work in the area of training and promotion of mental health.

In the year 2019, she directed a campaign titled ‘Child Safety, National Priority’ where she travelled non-stop 90 days from January 1st to April 1st, 2019 to all the 29 states and 3 union territories to conduct over 150+ training sessions on ‘Prevention of Child Sexual Abuse’, thereby becoming the first person to have done this in the country.