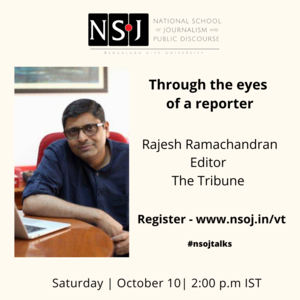 Rajesh Ramachandran: Through the eyes of a reporter

Rajesh Ramachandran is the Editor of The Tribune, Chandigarh, one of the oldest newspapers of the country and a former Editor-in-Chief of the national news magazine, Outlook. For about 25 years he has worked with some of India’s largest publications and a TV channel in Delhi, reporting war, insurgency, politics and government affairs.

Ramachandran’s political analysis and commentary appear in his regular column nous indica in The Tribune. Earlier, his column polibelly used to appear in The Economic Times. As a reporter, Ramachandran had covered the Kargil war for Hindustan Times; broken the coffin scam for The Times of India; and had extensively reported on the Maoist insurgency and the last Eelam war for NDTV.

Martyrdom to Freedom: 100 Years of Jallianwala Bagh is Ramachandran’s first book. He has edited this volume of essays on the centenary of the massacre by top Indian historians and it also has precious archival material from The Tribune - the only nationalist newspaper to have reported and investigated the massacre through the decades.