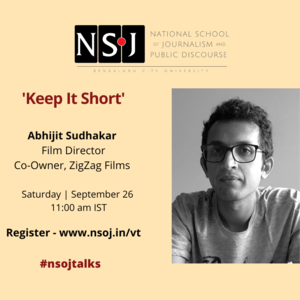 Abhijit Sudhakar is an engineer by degree. He started his journey as a filmmaker by interning under Prakash Belwadi, a national award-winning director, on a TV series. He then joined Nirvana films as an intern and soon moved to the role of a post-production supervisor, before becoming the director’s assistant to Prakash Varma. Some notable campaigns he worked on include the Vodafone pug commercials, Incredible India and the Zoozoos.

Link to the video