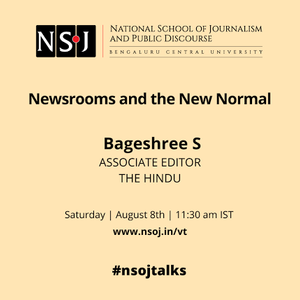 Ms Bageshree S is the Associate Editor at The Hindu.

She began her career with Deccan Herald, bringing out supplements like Sunday Herald, Articulations and the Deccan Herald Spectrum. She moved to The Times of India and later to The Hindu, and covered various path breaking stories. She has played a key role in making The Hindu paper's coverage of Karnataka more relevant, making it a leader in the state's news market. Currently, she heads the paper's Bangalore editorial operations as the Associate Editor.

Ms Bageshree will talk about how newsrooms function in the new normal, focusing on how, around the world, they have had to adapt and reinvent themselves to adjust to the new reality, keeping the safety of their employees and the time constraint to do so in mind. Bringing out news reports from accurate sources with timely updates in the current infodemic has also been a challenge - how have newsrooms reacted to and adapted to these changes?