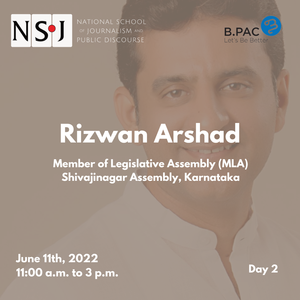 Education in Indian public policy is broadly an interdisciplinary program that has developed alongside a deepening relationship between the state, markets, and civil society. As a result of this deepening partnership, students of public policy are found working in political, corporate, government, and grassroots organizations. Through this bootcamp, we aim to build a clear sense of practice for the students in introduction to Public Policy. The bootcamp expects to lay the groundwork for them to grow powerful analytical skills along with an ‘ear to the ground’ instinct to become inspired change-makers.

About the facilitator: Rizwan Arshad

Rizwan Arshad has committed to work for the welfare of the people and become a community developer through his term in office. He has ear to the ground and understands the problems better and he works diligently towards achieving what's best for the constituents. He is a leader with an overarching vision and promises to deliver in his best capacity. As MLA, Rizwan Arshad has been vocal about the need to fund infrastructure and development works.

He works closely with civil society and all stakeholders to chalk out a robust plan to tackle existing issues and forthcoming challenges.


- 7 years of experience as National Office Bearer of NSUI and Youth Congress.


- Got the privilege to work for Congress party nationally from Kashmir to Kerala in multiple states.


- Fortunate to be the first democratically elected president for Karnataka Pradesh Youth Congress Committee and re-elected again as president for the second term from January 2014 and till June 2017.


- Actively involved in bridging the gap between youth and government in Karnataka.