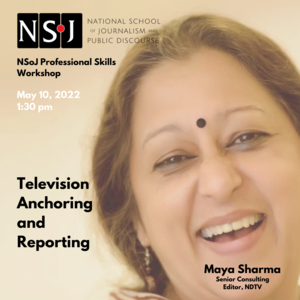 The workshop aims to provide students with practical skills for their future anchoring and reporting assignments.

The workshop would sensitise the students to the role and qualities of an anchor, what is needed to be a good anchor and different anchoring styles. It will also have practical exercises and feedback for the students to do a short anchoring assignment.

While giving them practical advice as they get ready to head out into the world of TV news reporting, they also get sensitised to the ethical aspects of their future roles.

Maya Sharma is Senior Consulting Editor for New Delhi Television. (NDTV). She has been a television journalist for over 30 years - as a reporter, anchor and documentary filmmaker. She is a Fulbright scholar from Syracuse University, New York and has won several awards for her professional work.

Maya was among the first trained television journalists in India, with training at FTII and CPC, New Delhi. Maya was part of the pioneering live telecast of election results in India in 1989 conducted by Prannoy Roy's NDTV and Doordarshan - introducing a brand new way of covering election results, including live interviews with candidates and newsmakers, This has been followed by extensive political reporting in all the southern states including coverage of elections since 1989 up to the 2019 Lok Sabha elections and the collapse of the Karnataka coalition government in 2019. Political reporting is a major focus of her work from Karnataka particularly - and she has closely watched and reported on the politics of this southern state for decades now.

As a television reporter, Maya has covered major news stories ranging from the devastation of the 2004 tsunami, the Mangalore air crash, the crimes and death of Veerappan, floods in Karnataka and Kerala, farmer distress and different aspects of the Covid 19 pandemic.

Maya has reported on gender issues, crime, civic issues, business, sports and environmental issues - with a special focus on wildlife and animal welfare - an issue very dear to her heart.

As an anchor, Maya has presented live national news bulletins and also discussion shows with audiences, including a weekly show, Agenda, on issues facing Bengaluru and Karnataka.

She has also anchored, directed and produced several documentaries. The subjects include the then-new call-centre phenomenon in Bengaluru, child adoption, illegal mining in Ballari, environmental issues and an award-winning feature on the transformation of Bengaluru.

2. The Kittur Rani Chennamma award for women's empowerment from the Karnataka State Government - 2019

4. Chanakya Award for Media Personality of the Year, Public Relations Council of India - 2017

5. Shortlisted for Association of International Broadcasters Award 2016 for two stories