Why do people in groups fail to take quick action when faced by crises? Read on to find how a single case impacted studies of the bystander phenomenon. 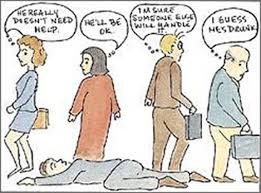 The sad reality of the bystander phenomenon today

“Once, a woman had jumped in front of a train at a train station. A crowd had assembled but nobody stepped forward to check her pulse. I ended up checking her pulse. People just watched,” Amal, a student said.

This is an example of the bystander effect, which is the tendency of an individual’s sense of responsibility to dilute when he/she is in a group, especially in times of a crisis. It refers to a sense of apathy in individuals and claims that they are less likely to help a victim if other people are around, as they expect someone else to come forward and take initiative. This theory states that the greater the number of people present, the less likely it is for them to offer help to someone experiencing distress.

Research into the bystander effect, also called Genovese Syndrome, picked up pace in the aftermath of the unfortunate case of Kitty Genovese in New York in 1964. Initial reports suggested that there were about 38 witnesses to the brutal assault and murder of Genovese by knife-wielding Winston Moseley in a parking lot and yet, nobody called the police. While the number of witnesses was later proven to be exaggerated and the truth clarified decades after the incident, the initial question remains - what happens to people in groups? Does our behaviour change when we are in groups as compared to when we are by ourselves? Do we lose our sense of responsibility when in large groups? If so, why?

This case was instrumental for social psychologists to understand human behaviour in groups and the influence of the presence of other people on an individual’s decision making. They tried to understand why people choose not to react even if they care, if in the presence of others. The concept of bystander intervention - whether people do or do not intervene in a situation when surrounded by other people - was studied. Some studies also proved an opposite reaction was possible - people might be more motivated to help and intervene if they knew people were watching.

American psychologists Bibb Latane and John Darley conducted extensive research on bystander intervention and developed several intervention models. According to these two researchers, every individual as a bystander goes through 5 steps of decision making and failure in any step can lead to delayed or oftentimes, no action at all. Bystanders also assess how reacting to the situation can benefit them, trying to understand the best possible outcomes for themselves.

“When I was in school, I was mocked in front of my classmates. Everyone saw that and probably knew that it was wrong, but nobody stepped forward to help me or stop it. I felt very low throughout my time in that school,” said Siddhanth S, an 18-year-old student.

From the point of view of a victim, this bystander effect can make the situation seem even more harrowing, as nobody steps forward when they need help. This is seen in attacks in crowded areas, where people scream for help but nobody does anything about it. Technology has also contributed to reinforcing this bystander effect as people are now concerned with only capturing evidence to send the perpetrator behind bars without actually doing something to help the victim fight off the perpetrator. This makes one question the notion of “you’re safer when you move in crowds, as someone will help if something happens.”

Kitty’s case also acts as a great example of how false information prevails in society. Several key “facts” in the original story, like there having been 38 witnesses to the murder (when in reality, one person saw the first attack and yelled to scare the attacker away, and the subsequent rape and murder was actually witnessed by nobody) or that nobody came to help ( a neighbour alerted the police) have been disproved and yet, these “facts” remain unchecked in books and papers decades after it had occurred. The initial report by The New York Times held several factual errors and was criticised for sensationalising a sensitive issue. It is interesting to note here how a narrative spun by somebody or something popular can remain in the minds of people and even be accepted as the truth.