The season of unpredictability

The second week of the Indian Premier League was the perfect example of an anti-climax screenplay. Read on. 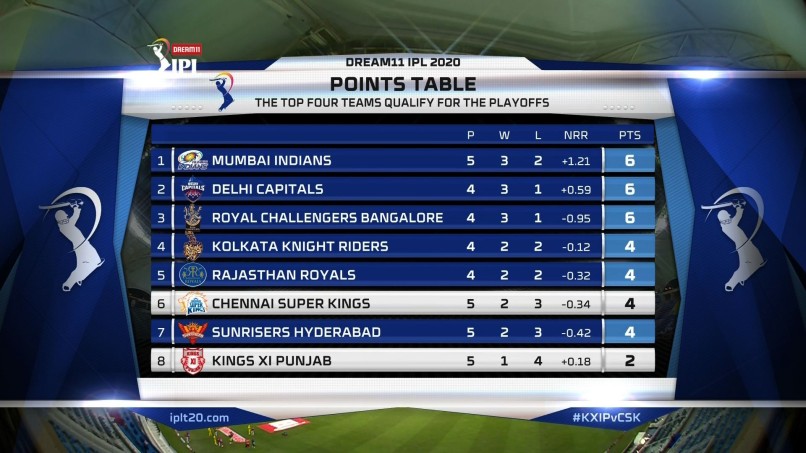 After the high-voltage first week, the expectations from the second week were sky-high. There were a few brave efforts, some heartbreaks and plenty of reasons to admire the league. Here’s a quick recap for the week -

Game 10: MI vs RCB
Our Monday Morning blues were wiped away by a thrilling Super Over game between Mumbai Indians and Royal Challengers Bangalore. Batting first, the RCB openers were off to a great start with Aaron Finch taking the lead. However, after Finch and Captain Virat Kohli were sent back to the dugout, the other opener, Padikkal, shifted gears and scored his second IPL fifty. His innings was complemented by an elegant half-century by AB De Villiers, followed by the big hits of Shivam Dube.

With 201 runs to chase, Mumbai was off to a shaky start. RCB’s spinner, Washington Sundar, got rid of Rohit Sharma and the other bowlers dismissed the top order. Sundar gave 12 runs in his quota of four overs and this put RCB in the driver's seat mid-game. Despite RCB being in control, towards the death overs, Ishan Kishan’s 99 and Pollard’s 60 mounted a comeback, tying the game.

A dramatic match deserves a dramatic finish - and the super over did just that. RCB’s Navdeep Saini nailed a few yorkers and restricted Mumbai to 7 runs. With 8 runs to chase, RCB’s big guns - Captain Kohli and AB de Villiers faced the clutch moment specialist Jasprit Bumrah. While Bumrah bowled to his field and tried to bluff the batsman, he failed to stop RCB’s favourite duo.

Game 11: DC vs SRH
The David Warner-led SRH-side registered their first win against Delhi Capitals. With the inclusion of Kane Williamson, SRH’s batting order looked strong on paper, and this translated on the ground as well. On a slow Abu Dhabi pitch, the top three SRH batters - Johnny Bairstow, David Warner and Kane Williamson - put up a fighting total of 163.

DC did not start well, -after losing one of the openers at the start, there was a need for a partnership between two experienced batsmen. None of them could capitalize on the slow start and thus ended up not only giving their wickets away but also slowing the run rate. In the end, it was a clinical victory for the SRH as they never allowed DC to come back. Rashid Khan was adjudged the Man of the Match.

Game 12: KKR vs RR
The Rajasthan Royals were undefeated until they faced Kolkata Knight Riders. Put to bat first, KKR were troubled by Jofra Archer’s spell. Bowling constantly at over 145kph, Archer gave 18 runs off his four overs and took the wickets of Sunil Narine and Dinesh Karthik. The other bowlers failed to follow the tone set by the Englishman. A steady knock by Shubman Gill and Eoin Morgan and a quick contribution by Andre Russell helped KKR achieve a comfortable score of 170.

Having chased down 223 in their previous game, this run-chase was expected to be a walk in the park for Rajasthan, that is until their innings began. By the 8th over, Kamlesh Nagarkoti and Shivam Mavi had troubled the top order and RR were 43 for 5. Despite Tom Curran’s 54 later on, KKR were in control throughout the game.

Game 13: MI vs KXIP
After being on the wrong side of the blanket finish in their previous game, the defending champions came back stronger against KXIP. Following the same suit of bowling first, MI was off to a weak start. The first couple of wickets fell in quick succession, on a pitch which seemed to favour the batsmen. Skipper Rohit and Ishan Kishan put on a defiant 50-run plus partnership, though the run-rate remained on the slower side. Rohit lost his wicket, only to make room for Pollard and Hardik Pandya to end things well. Last 5 overs saw 89 runs being put on the scoreboard.

KXIP were off to a blistering start with the openers scoring at 10 runs per over. Jasprit Bumrah gave Mumbai their first breakthrough and Punjab never made it back in the game after that. Losing wickets on regular intervals added to the woes of KXIP. Even after the efforts of Nicholas Pooran, neither could he nor the middle-order replicate the hitting done in the first half of the game. MI won the game by 48 runs and consolidated their place at the top of the table.

Game 14: SRH vs CSK
A rather low scoring game with a tense finish, the game between Chennai Super Kings and Sunrisers Hyderabad was exhilarating. Deciding to bat first, the scoreboard for SRH moved slowly. After losing 4 wickets by the end of 10 overs, SRH were stranded and hurt. On the flip side, in the last five overs, they scored 64 runs. The credit for overcoming the mess created initially goes to Priyam Garg and Abhishek Sharma whose partnership took SRH to a total of 164.

With a pressing need of a victory, the failure of CSK’s top batting-order continued to torment the team. SRH bowlers kept CSK at bay initially, and despite Ravindra Jadeja and Mahendra Singh Dhoni fighting back towards the end, CSK fell short by 7 runs. SRH’s leading wicket-taker, Bhuvaneshwar Kumar, walked back to the dressing room after having trouble with his thigh. Nevertheless, the young bowling line kept their cool and helped SRH cross the victory line. 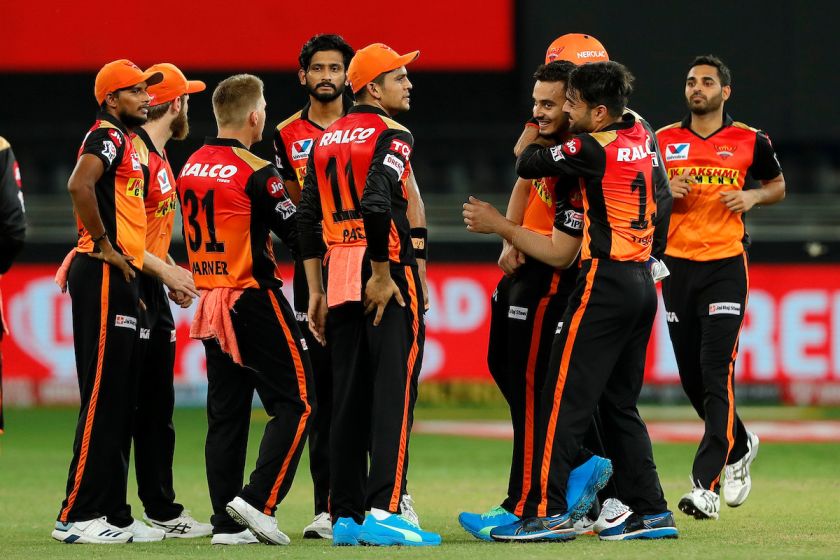 Game 15: RR vs RCB
Contrary to their previous games, the Royal Battle was fairly a calm and one-sided game. In the first afternoon game of the season, Rajasthan opted to bat first. The openers looked impressive but RCB’s pacers soon ended their free flow of runs. The wickets of Sanju Samson and Robin Uthappa followed and Rajasthan seemed to be wary. ‘Operation Recovery’ began for Rajasthan towards the latter half of the innings as Mahipal Lomror, Rahul Tewatia and Jofra Archer took advantage of RCB’s inexperience at the death.

Having spent about two hours in the scorching heat, chasing 154 initially seemed tricky. Having lost the wicket of Aaron Finch earlier on, Devdutt Padikkal’s fifty and a 99-run partnership with RCB's captain Virat Kohli put RCB in a comfortable position. While Padikkal took charge, Kohli played himself in and let the youngster play the big shots. Their partnership was broken by Jofra Archer and Padikkal walked to the dressing room. As AB de Villiers walked to the middle, the master of chasing down totals, Virat Kohli, began middling the ball, something that this season hadn’t seen yet. Courtesy of an almost-all-round performance, RCB won their third game of the season.

Game 16: DC vs KKR
The game at Sharjah was a cliffhanger, won by Shreyas Iyer-led Delhi Capitals. After winning the toss, Karthik invited DC to bat first and, unsurprisingly, what followed was a run-fest. Skipper Iyer led from the front: his 88 and Shaw’s 66 helped DC post a mammoth target of 229 for KKR.

KKR was conservative with their approach. The seasonal opener, Sunil Narine failed again and the young middle order couldn’t quite capitalize on the decent start provided to them. The shuffle in the batting order invited a lot of criticism, Dinesh Karthik’s mediocre form continued and Russell’s promotion was fruitless. It was the English veteran, Eoin Morgan and Rahul Tripathi who anchored KKR’s comeback. This comeback was short lived as Rabada and Nortje stirred things Delhi’s way. For Delhi, it was a convincing win,and also a major boost in the NRR.

Game 17: MI vs SRH
Mumbai Indians secured another victory in the tournament, with a hard-fought play against Hyderabad. In a day match at Sharjah, Mumbai decided to bat first and to their nightmare lost the skipper in the first over. Quinton de Kock managed to get back into form. He was complimented well in the middle by Ishan Kishan and Hardik Pandya. On a ‘concrete cement-like pitch’ there was a need for a huge total and the Pandya brothers along with Pollard were all set to deliver. MI finished strong at 208.

For SRH, a couple of healthy partnerships between the skipper, Johnny Bairstow and Manish Pandey helped, though none of them except for the skipper himself made it big. The vulnerable middle order was exposed to possibly one of the best attacks. While the 18-year-old Samad hit Bumrah for a couple of huge sixes, it was a fairly easy win for them in the end.

Game 18: CSK vs KXIP
Chennai’s losing streak ended as they clinched a comfortable victory against Kings XI Punjab. Openers KL Rahul and Mayank Aggarwal gave KXIP a promising start. After the 50-run stand was broken, KL went on to score a fifty. Shardul Thakur’s beautifully executed yorkers confined KXIP to a total of 178.

Shane Watson and Faf Du Plessis opened the innings for CSK. Their eloquent strokes made batting look like a child’s play. At no point in the game were they irked by Punjab’s bowling line up. Without losing a wicket, the openers chased down the total with all 10 wickets in hand. For CSK, this game was redemption and for KXIP this was a forgettable match.

What some may call a lacklustre week compared to the previous one, this week had many positives.The brilliance of the uncapped Indian players was on display each game. From Padikkal and Ishan Kishan to Mavi and Natarajan, the youngsters played with their hearts on their sleeves. The week stood as a testament to the unpredictable nature of the tournament.